35 Years After the AIDS Epidemic Began, It’s Devastating the South

This month the AIDS epidemic turns 35. Though things have changed dramatically, turning an HIV diagnosis from a death sentence to a manageable illness, other aspects of the epidemic remain strikingly and sadly similar.

History has christened the beginning of AIDS as June 5, 1981 when an issue of the government publication MMWR highlighted five cases of pneumocystis pneumonia in healthy men in Los Angeles. But there were really seven cases of this infection that doctors were rarely seeing, and the sixth and seventh cases were Black men, one of them gay, the other Haitian, according to the author of the report. Those cases were “disappeared” because they didn’t fit into the rest of the profile of healthy white men.

Several years later, the illness had a name – GRID, gay related immune-deficiency. As the widely accepted media narrative went, the disease was attacking seemingly healthy gay, white men, mainly in New York and San Francisco. But in reality, in the mid-80s, the incidence rate of HIV was three times higher for Black and Brown people than for whites. And 25 percent of new cases were in Blacks, even though we made up only 12 percent of the population. This counter narrative, also known as the truth, didn’t fit neatly into the image of AIDS. So Black folks were made invisible in the epidemic; we were erased – which cemented another host of problems that have followed us for three decades.

Fast forward to today. Largely under the mainstream radar, HIV/AIDS continues to devastate pockets of the African-American community. AIDS is now situated squarely on the shoulders of Black LGBTQ men and transgender women. Over the past decade, HIV diagnoses have declined for Black Americans, with the biggest declines for Black women – a 42 percent drop since 2005. But a report in February predicted that if nothing changes, half of all Black men who have sex with men will be infected with HIV during their lifetimes. Half.

What’s annoying is that this “new news” is not new. In 2000 – 16 years ago – researchers sounded the alarm about high rates of HIV in young, Black gay and bisexual men – and again in 2005 and again and again. So common sense says that unless you do something drastic, which didn’t happen, nothing is going to change. In fact, it got worse.

Now, most new cases of HIV in the United States are diagnosed in the South. A report out of Emory University last May confirms that 21 out of 25 of the metropolitan areas with the country’s highest HIV burdens for gay and bisexual men are located in southern states—where the majority of Black Americans reside.

According to the new numbers, the top 10 metro areas and their rates of gay and bisexual men diagnosed with HIV are:

Look closely at Jackson, the state capital of Mississippi, which has moved into the number-one position with an infection rate just short of 40 percent for gay and bisexual men. That rate is higher than Swaziland, Lesotho, and Botswana, the impoverished nations in sub-Saharan Africa with the highest levels of HIV in the world.

Terrance E. Moore, deputy director of the National Alliance of State and Territorial AIDS Directors, puts it simply: “We have a raging fire on our hands.”

The U.S. government insists that it has not fallen asleep at the wheel and is working to tackle the problem. In 2015 the CDC directed $38 million to help health departments and community based organizations expand access to PrEP and HIV care and treatment for gay and bisexual men and transgender individuals of color, according to Dr. Jonathan Mermin, who directs HIV/AIDS prevention for the CDC. Between 2010 and 2015 the agency increased its overall support to southern health departments and community based health organizations by 22 percent, he says.

However well intentioned, this approach remains a day late and a dollar short. “In effect, HIV is a rite of passage for gay men no matter where we live in the U.S., and especially men of color,” says Greg Millett, MPH, vice president and director of public policy at amfAR. “Resources must follow the epidemic.”

Many Black American advocates in the South are no longer waiting for someone else to put out the fire. 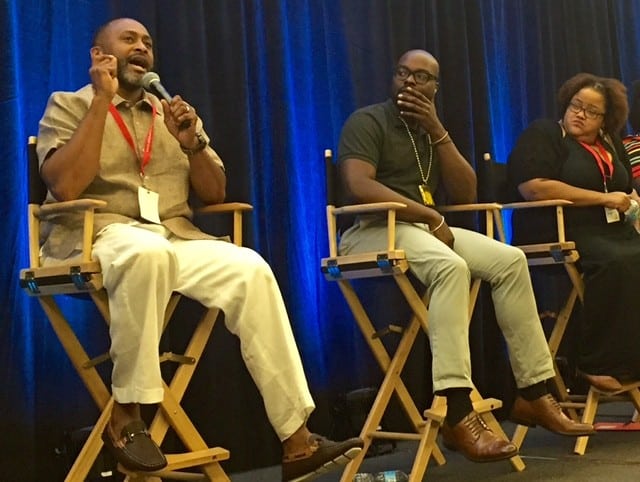 Earlier this month, hundreds of health care providers, administrators, activists and people living with HIV gathered in Memphis for the fourth annual Saving Ourselves Symposium. Organized by Marvell L. Terry II, founder of the Red Door Foundation, this year’s symposium focused on the theme “built for better, challenging African-American gay and bisexual men and transgender women to focus on strength to address the problem.

Many of those attending this conference understand that HIV/AIDS must be seen through a human rights lens. The disease doesn’t take hold for no reason. It strikes those less equipped to fight it off. Limited access to health care, joblessness, poverty, housing insecurity, incarceration, homophobia, and racism—have fueled the epidemic across Black communities. To make matters worse, a number of southern states have refused to expand Medicaid under the Affordable Care Act, limiting access to prevention, care and treatment options for everyone, most pointedly people living with HIV.

Anti-LGBTQ stigma fuels this fire – as all of us have seen in the massacre in Orlando — and it has long burned brightly in the South. Just after North Carolina’s “bathroom bill” garnered international attention in March, Mississippi’s governor Phil Bryant sealed his state’s fate with anti-LGBTQ legislation, sanctioning bigotry under the guise of religious freedom.

“These bills are opening a door toward Jim Crow era laws,” says Tami Sawyer, a community activist involved in the Black Lives Matter movement, who is running for Tennessee’s state legislature. “To me the most important thing in the Bible is God is love, and we are not operating under that with these bills.”

Make no mistake: This kind of legislation fuels the spread of HIV. “I think it’s a public health nightmare,” says Douglas Brooks, former White House AIDS “czar” who is now senior director for community engagement at the pharmaceutical company Gilead. “Stigma and discrimination — already barriers to the work we are doing — will be exacerbated by these hate filled laws.”

Many in Memphis called on Black clergy to take a stronger role. Certainly, increasing numbers of churches have joined the battle against HIV/AIDS, providing HIV testing, launching AIDS ministries, their pastors speaking out from the pulpit. But far too often, the church remains a source of harm, not help or healing.

“The ways in which [the church has] harmed and shamed people in the image of God is disastrously disturbing,” says Rev. Earle Fisher, senior pastor of Abyssinian Missionary Baptist Church in Memphis. “The church owes the LGBTQ community an apology.”

Still, conference attendees stressed resilience and shined a light on its heroes and role models in the AIDS struggle. My Brother’s Keeper a full-service HIV facility in Jackson, Mississippi, which runs the state’s only HIV/AIDS clinic focused on the needs of LGBTQ residents, was honored with a unity award. Millet received a “flame thrower” award at the Memphis symposium for his work; he calls for a collective approach.

“We have great recent examples where Americans have banded together to address urgent issues,” he says, citing anti-bullying initiatives and LGBTQ marriage equality. “Let’s also turn a corner on the high rates of HIV among gay men, by putting our resources and efforts where they are needed most.”

Linda Villarosa runs the journalism program at City College in Harlem and writes frequently about health and social issues. You can follow her on Twitter.

This article is a collaboration between EBONY.com and the Black AIDS Institute to raise awareness about HIV/AIDS in the Black community. Read our previous articles here.