Just months after being accused of racist seating policies, popular restaurant chain Houston’s is facing even more backlash after a security guard allegedly assaulted three young actresses at one of their Atlanta locations.

According to AJC, Gerald Griggs, an attorney representing the women, said the three friends asked staffers if they could use the bathroom after business hours. Employees agreed and let the women in. As they were exiting, Atlanta police officer, Jay Guzman, who moonlights as a security guard at the restaurant, began to man handle the women in an attempt to get them to leave faster. Guzman admitted to grabbing Brittany Marie Lucio by the wrist to “lead” her out of the restaurant, but Griggs claims he clearly used excessive force. Video shows Guzman holding Lucio against a nearby bush until officers arrived. She was with friends Asia’h Epperson and Erica Walker.

“We are seriously concerned with the level of force that was used and we want answer to why they ended up in the bushes,” said Griggs. You can’t just leave the restroom after you just finish using it. You have to wash your hands. Have to make sure that you have taking care of all of your needs.”

See footage of the incident below.

The women were charged with trespassing, and Lucio was also accused of obstruction. 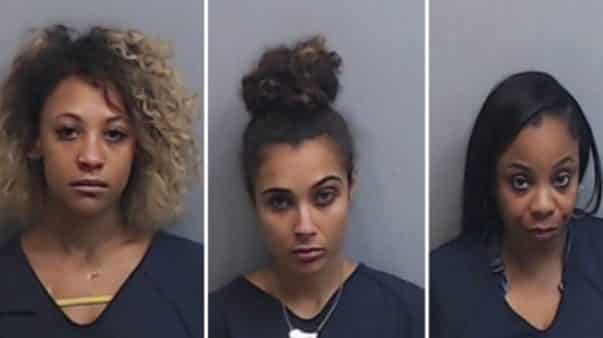 Atlanta rapper and activist T.I. took to Instagram outraged by the incident, sharing images of injuries Lucio obtained from the incident. Check out T.I. breaking down the situation and calling for the closure of Houston’s via TMZ below.

Absolutely UNACCEPTABLE BEHAVIOR!!!! ACCOUNTABILITY IS MANDATORY!!!! U WILL PAY FOR THIS!!! COWARD!!!! 🖕🏽Houstons & Guzman!!!