Try to erase the racist images many of us have absorbed from cookbooks and articles published by the White press. Some cast a side eye at the name of the Hopping John or Hoppin’ John recipe due to rumors it may have originated with a male house servant serving the dish with exaggerated and buffoonish mannerism.   Still others share an equally unsubstantiated folktale of a physically challenged Charleston street vendor limping while he hawks a dish made with black-eyed peas.

But the pendulum swings harder toward another interpretation altogether. Many food historians agree that the sounds of Creole French "Pois a Pigeon” can be misheard as “Hoppin’ John" to Charleston residents where the dish first gained popularity during the same time White Haitian planters fled to the South Carolina coastal city after the Haitian Revolution.

No matter the name though, this dish is a staple of many African American New Year’s Day menus.

It’s no surprise then that Ebony’s first Food and Fashion editor, Freda DeKnight, included a Hopping John recipe in her 1948 cookbook. In fact, A Date with a Dish includes three recipes for the cowpea variety described by the Food Lover’s Companion by Sharon Tyler Herbst, as a “small beige bean with a black circular ‘eye’ at its inner curve.”

“Do you want good luck for New Year’s,” DeKnight writes in the Vegetables on Parade chapter. “Then try the recipes given for dried black-eyed peas. If you shun them on the market shelves or never heard of them before, just try cooking them as suggested. They are a real New Year’s tradition in the South. Cooked with a tasty hog’s head, pigtails, salt pork, ham or bacon, they make a fine dish; not only on New Year’s but any day you desire a hearty and delicious nourishing dish.”

Following her enthusiastic introduction, the recipe for Plain Black-Eyed Peas calls for smoked meat or bacon ends. Black-Eyed Peas in Sauce, adds tomato puree, red pepper pods and ham hocks. The Hopping John recipe offers a study in simplicity with six ingredients including a pig knuckle, which was updated to ham bone when the book was republished by Johnson Publishing Company as The Ebony Cookbook in 1962, a year before DeKnight ’s death.

Jennifer Hill Booker, author of Field Peas to Foie Gras is a fan of DeKnight and her cookbook, which many Black culinary professionals and home cooks consider as having introduced the concept of well-written recipes from a Black author, intended for a Black audience.

“I didn’t learn about her in culinary school; I discovered her during my own research and became fascinated with her European travels and how her recipes reflect her appreciation for both simplicity and sophistication,” Booker told EBONY.com.

Booker, a graduate from Le Cordon Blue Paris grew up on a family farm near Charleston, Mississippi, 70 miles south of Memphis. The owner of Your Resident Gourmet, an Atlanta-based catering company, says she has eaten black-eyed peas as part of a New Year’s celebration as far back as she remembers with a menu that always includes turnip and mustard greens, cornbread or hoe cake. She says she most remembers eating field peas growing up, a smaller bean generically referred to as crowders. These days, Black-eyed peas are available throughout the market dried, canned, frozen and re-hydrated in packages located in the store’s fresh produce section.

“For the past centuries, black-eyed peas were also called calavances, cornfield peas, cowpeas and field peas,” Adrian Miller explains in his book, Soul Food : The Surprising Story of An American Cuisine, One Plate at a Time. It’s a loose definition, but Miller adds a helpful perspective for those of us more focused on recipes. “When the sources I cite use one of these other terms, you should think black-eyed peas,” he writes.

Booker remembers the fresh Purple Hull Peas she grew up “shelling on my grandmother’s front porch by the cracker-sack full” as larger, glossier with a variegated design. In the book, she describes her delight at discovering the same variety at a Parisian farmer’s market. “I bought a double handful of the peas and cooked them with smoked hog jowl I bought at the La Boucherie next door and had them for dinner that night,” she wrote.

Can we substitute smoked turkey for the salt pork or cook the beans without any meat?

“Of course,” says the chef, who is currently working on a cookbook highlighting similar ingredients in Southern American recipes and French recipes. Still, she reminds us the flavor won’t be the same. Those who are vegetarian can certainly add in olive oil or butter for flavor. Try Booker's recipe below and let us know how you like it. 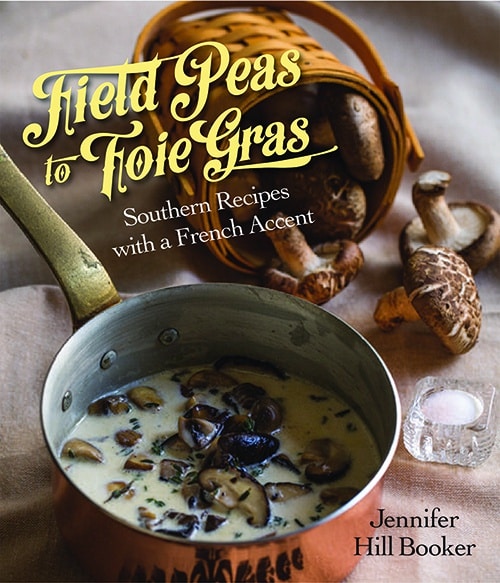 In a colander, pick over the peas and discard any misshapen or discolored peas, and rinse well. Transfer the peas to a large bowl and fill with enough cold water to completely cover the peas. Soak overnight.

When you are ready to cook the peas, drain and place them into large stock pot.

Slice the fat off the salt pork down to the rind, leaving the fat and rind attached. Do not discard the fat.

Over medium-high heat, bring the peas to a boil, then reduce the heat to low, cover tightly and simmer slowly for 2 hours, or until the peas are tender.

Season with salt and pepper to taste. Do not skim off any fat. Makes 8 servings.