Haiti and the Diaspora: Watching Hurricane Matthew from Afar -- and Praying

On January 12, 2010, I sat in my living room more than 1,500 miles away from my home nation of Haiti as it was battered by a magnitude 7.0 earthquake. My body mimicked the symptoms of someone on severe caffeine overload: erratic heartbeats, trembling hands, uncontrollable movements. Logistically, the only way home was locked. The four-hour flight that could have brought me home was sidelined until further notice.

In a country already struggling with unreliable communication systems and infrastructure, it took weeks of an elaborate telephone game to account for all our extended family. On that day and the many weeks following, mine and other Haitian households in the U.S. and across the world watched in fear as the injured and death count eventually rose to more than 500,000.

Today, Haiti faces another potential crisis that also threatens to bring devastating consequences. Hurricane Matthew, a violent Category 4 storm with anticipated 140-mile-per-hour winds and torrential rain, is on target to strike parts of Jamaica, eastern Cuba and the Bahamas, with the bullseye on Haiti. In its direct path is Southwestern Haiti – specifically the coastal town of Les Cayes – with a population of 70,000. Also expected to be slammed is the densely populated (about 150,000-200,000 people) Cite Soleil, a section of the capital Port-au-Prince. Because Cite Soleil is the termination of Port-au-Prince’s drainage canals, the area is clogged with waste from higher up in the city. 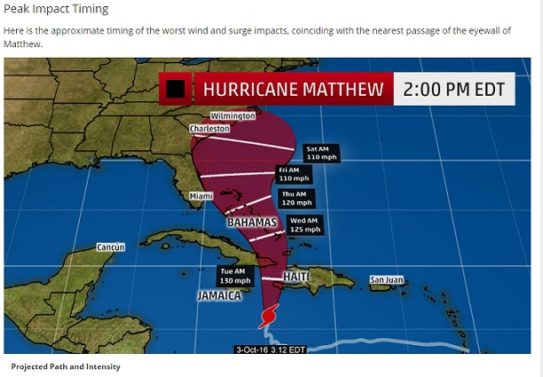 There’s a helplessness to handling such disasters from afar. It’s a common feeling among Americans of foreign descent facing catastrophes in their native land while they are away. Logically you know there’s probably not much you could do even if you were present, but emotionally it’s hard to reconcile. There’s also a sense of “guilt of the survivor” that makes you question why you survived but loved ones didn’t. The guilt is associated with wondering why you had the opportunity to grow up or live in a country with access to resources that other family members didn’t. Resources that could have improved their chances for survival.

During the days following the earthquake, there were calls to the few houses with landlines and to the younger relatives with cell phones. It was their job to travel to different neighborhoods around Port-au-Prince (where much of them lived) to inventory those who were alive and dead. And then to separate the alive category to triage needs: health, food, and then shelter. So devastating was the situation, that nowhere in that priority of emergencies did we even consider there was room for mental and emotional care.

In a country beleaguered by deforestation, an epidemic of cholera, and a generally unreliable sewer system, concern for the safety of citizens remains high. Fear of Matthew’s catastrophic impact include life-threatening flash floods, mudslides, and the spread of the cholera outbreak (the devastating strain brought to the country by U.N. Nepalese earthquake peacekeepers).

As a member of the diaspora, the fear of this is personal. As I watch, wait and pray that the brunt of the storm will veer off to sea, there’s a sense of guilt knowing the majority of my family and I are safe while others are not. I’ve never taken for granted that despite its many flaws, life growing up in the U.S. has offered benefits beyond anything that could have been possible for us in Haiti. The guilt amplifies the feeling of helplessness in not being able to jump in with support – monetary or otherwise.

I feel shame for being relieved that all of my immediate family live in the U.S. and are therefore safe. I struggle with being grateful for that blessing while still praying for the care of extended relatives (and my countrymen in general). My shame also stems from not having returned to Haiti since I emigrated to the U.S. as a very young child. What right do I have to claim emotional connection to a people and a country that is mine only through secondhand stories?

These mixed emotions are first world problems to process at my leisure. What matters right now is praying the brunt of the hurricane veers off to sea and spares the countries in its path. And if doesn’t, that I remember to whom much is given much is to be expected, and offer support however possible.

While I continue to hope for the best and wait to know how else I can help, I am holding on strong to the truth of this statement from Haiti’s Interior Minister Francois Anick Joseph. “I believe it’s an occasion for us to show our resilience, to show the capacity that we have in the face of adversity.”