Iggy Azalea's Remarks About Beyonce Are Stupid--And Scary As Hell

Besides having a remarkable impact on Black women, Beyoncé’s Lemonade has also captivated most of the civilized world. Rolling Stone bestowed a five-star rating on her latest visual album and besides the unimportant opinion of professional troll Piers Morgan and his ignorant, uninformed ilk, it has been praised wide and far for its symbolism, depth and sincerity.

While many critics, like Melissa Harris-Perry, have praised it for be a well-rounded ode to Black women worldwide, there is one “artist” who believes that her album is little more than a racist tirade: Iggy Azalea.

As far as Iggy’s concerned, Beyoncé’s lyric: “He better call Becky with the good hair” from the song “Sorry,” is an anti-White troupe that belittles white women.

This was enough for her to go on an impassioned Twitter tirade, effectively lashing out at Black people who use the term as society’s “real racists” and clutching on to the role of the perpetually-aggrieved silent majority who are the “actual victims” of racism in America, due to the “scourge” of “reverse racism.” 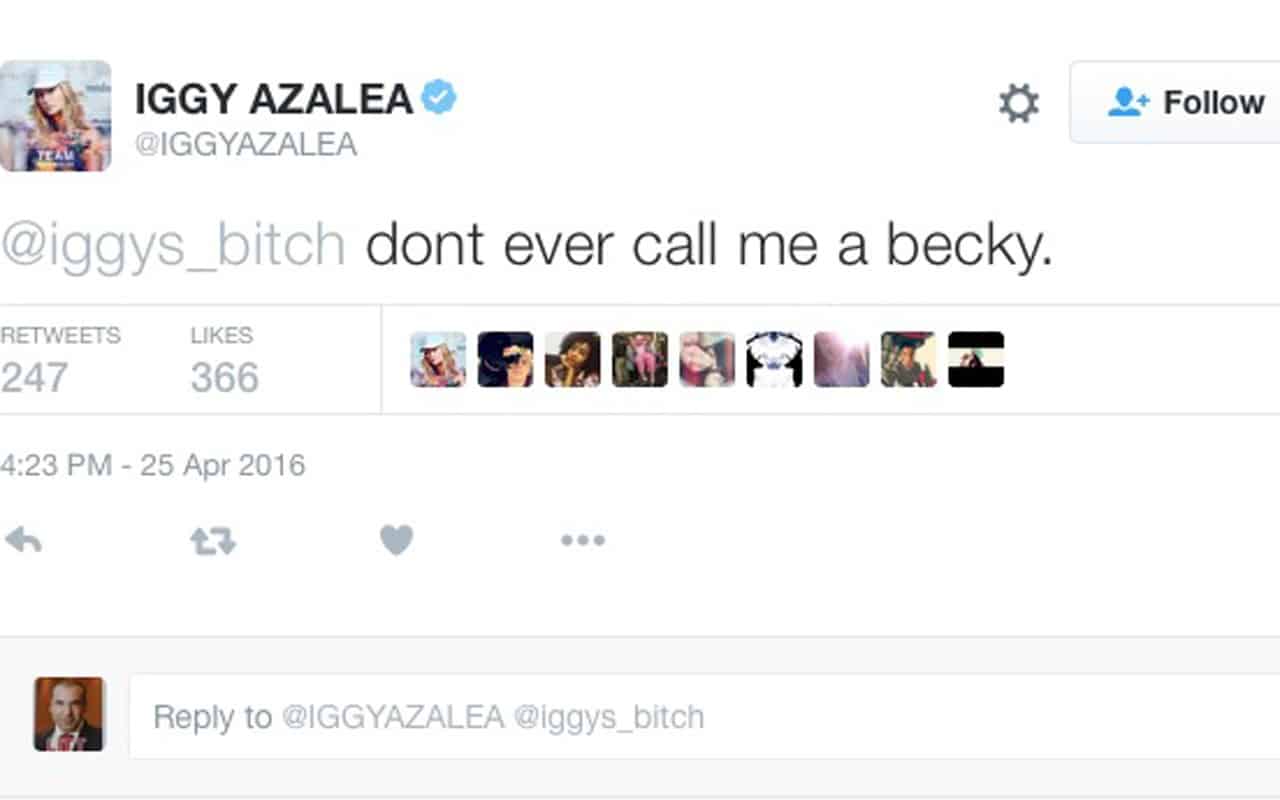 Now, truth be told, this is where I would go out of my way to read Iggy for having little to no depth of what the term “racism” truly entails, especially as a white Australian woman who appropriated an entire culture and stereotypes of our collective mannerisms in order to make a buck, but I don’t feel like that’s the appropriate response. I really don’t have any desire to call her an idiot, claim she’s anti-intellectual and blast her for her lack of racial nuance and understanding, because her comments don’t piss me off – they actually scare me.

Because Azalea, who is currently dating Lakers backup Nick Young, a Black man, recently stated that she intends to have kids with Young, which would mean that with all her willful racialized ignorance, she could actually bring a young person of color into this world. While Iggy may be completely clueless about race and prejudice in America, her ignorance should scare the hell out of all of us because she has the ability to pass that down to her child(ren), who will be dangerously misinformed about the actual racial climate in America.

Her children could grow up believing that we live in a post-racial society, which would be a myth that would critically affect their ability to recognize and fight discrimination. Her children could be the type to scream, “All Lives Matter” not knowing that their lives are endangered simply due to the color of their skin. Her children could be the type that we mourn collectively as a new hash tag, simply because their mother never taught them the importance of heightening their double-consciousness. Her children could be severely handicapped by having a parent who doesn’t have the capability of talking about race in a mature and cogent manner. So me using this article to throw a solar-eclipse amount of shade at her would do nothing but cause her to stubbornly double down, reinforcing her own ignorance.

Azalea’s massive racial blind spot is a serious issue that many White women in her situation need to be cognizant of. While it may be an immediate reaction to become defensive regarding race issues, it’s important that she, a White woman, is far more competent about the real issues of race in America, or women like her will be unequipped to adequately prepare their child to survive in a country where systemic racism still exists.

Listen, if you’re a White woman who thinks that the name/term “Becky” is a sexist, racially-coded pejorative, that’s fine and it’s fair to state. But, please do so without falling into the Trump-esqe trap of White victimhood. If you’re a White woman who is thinking about having a biracial baby, who will be identified as Black as soon as he or she leaves your womb, please understand that it’s very important for you to not try and compete with your kids over who’s the biggest victim in the household, when you have one privilege that you cannot pass onto them, no matter how hard you try.