As far as business mogul Bill Pickard is concerned, the more money that African-Americans can spend with each other, the better.

He added, “You know, we tried politics, and you know what happened. … We tried marching. We tried protesting. And there is no silver bullet. Entrepreneurship is not a silver bullet, but economics drive most of our lives. The more money we keep in our community for a longer period of time, we all will benefit.” 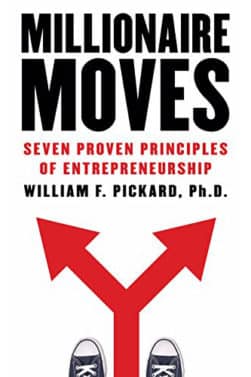 Pickard’s long business career illustrates the potential of Black entrepreneurship. The Global Automotive Alliance, a network of logistics and manufacturing firms of which he is founder and chairman, had $415 million in revenue in 2015, according to Black Enterprise. The 75-year-old mogul is also co-managing partner of MGM Grand Detroit Casino; CEO of Bearwood Management Company; and co-owner of five Black-owned newspapers. Along the way, he picked up a Ph.D. in psychology from Ohio State University. Committed to promoting Black economic success, he has served on the boards of the National Urban League and the Detroit Black Chamber of Commerce, among many other organizations.

Now he is sharing the lessons he learned in Millionaire Moves, a book he says is both relevant to millennials aspiring to entrepreneurial success, and older people who unexpectedly find themselves out of a job and needing to create their own income opportunities. Written with journalist Denise Crittendon, the breezy guide includes life lessons from Pickard’s streetwise, numbers-running Uncle Paul, plenty of inspirational pep talk and numerous war stories from Pickard’s years in the trenches of capitalism. In an interview with EBONY, Pickard describes how the insights he shared in the book relate to current events.

EBONY: Where are the opportunities for Black entrepreneurs in places like Detroit, where you achieved your own business success, and in Flint, Michigan, where you lived as a youth?

Bill Pickard: Opportunities are everywhere. We just have to flip the switch and that there are some dynamics now that we just have to become accustomed to. For example, in Flint, Michigan, which gave me a tremendous start in life … the [auto industry] jobs are not coming back, no matter what the politicians say. The jobs didn’t go to Mexico, by the way. The jobs didn’t go to China, primarily, by the way. The jobs went to technology. That’s the new frontier. That’s the new horizon.

EBONY:  Speaking of where opportunities are going, you were a member of the National Advisory Committee on Trade Policy Negotiations in the Office of the United States Trade Representative under President George W. Bush. Will President Donald Trump’s protectionist trade policies boost or hurt the automotive industry, where you made your fortune?

Pickard: Well, I don’t know what the current administration’s trade policies will be, and I don’t think anyone else knows. I know what the rhetoric is: protectionism. But at the end of the day…it will be just as critical [to look at] where we’ve been over the last 2 decades. I don’t think anyone’s going to build a wall and stop goods from coming in from Mexico or China. I think there will be a lot of rhetoric in that regard and I’ll repeat what I said a moment ago: Canada, China and Mexico didn’t take most of the jobs. Technology took most of the jobs.

EBONY:  The “seven proven principles” you list in your book include vision and attitude; opportunity; finance; relationships; talent and skill set; failure; and faith. Which of those principles is most pivotal to success, if you had to choose?

I tell people use Flipboard, read EBONY and JET. Just look, look, look! I think that’s what [EBONY and JET founder] Mr. Johnson was doing when he showed Sugar Ray Robinson in his Cadillac in Harlem with 50 suits and 75 pairs of shoes. It was partly aspirational psychology … but that was what EBONY did in those early days. It exposed us to what was possible.

Today, it’s even more critical, because I would suggest to you that because of gentrification and integration the Black role model [for instance, in Chicago] they have left the South Side. They’re gone… so you’ve got to read. You’ve got to read Inc. magazine, Entrepreneur, Fast Forward, EBONY, Essence. Did you know [hair care products mogul] Madam C.J. Walker had a vision board in her little shack in 1880, that she and her daughter got up every morning and looked at?

EBONY: You mention in your book that she found a piece of plywood and covered it with pictures that she had cut out of the Sears & Roebuck catalog.

Pickard: You will never be what you cannot see.

EBONY: What’s next for you?

Pickard: I’m working on a book called 100 Amazing Black Business Facts That We All Should Know. I’m also working on another book called My Mama Done Told Me, which is autobiographical.