It Ain’t Over Until The “Big Sassy Black” Lady Sings: Dear Nicole Arbour, Fat Shaming IS a Thing

“Big Sassy Black women in Church Dresses are my favorite thing in the world. But I’m really selfish and I want to keep you around. I have no idea the correlation between high notes and calorie intake, but I’m not going to question it.” — Nicole Arbour, #DearFatPeople

“Sticks and Stones may break my bones, but names will never hurt me!” is a mantra that most of us learn early on as a way to cope with all the mean spirited teasing and taunting that comes our way as children and continues thru adulthood.

For me, the taunting was about my size. I was always teased for being fat. I must admit that there were times when the insults hurled at me cut so deep that it made my soul bleed. In those moments I would have preferred a stick, a stone or even a machete because physical wounds sometimes heal faster. My only form of self-defense was comedy. You hit me with words, I slap you with my tongue. My being funny was less about entertaining people and more about survival. Comedy has saved my life.

With that being said, I love a good joke. Even a fat one. If it’s funny, I will laugh!

So when I woke up one morning with my inbox filled with emails with a video link of Nicole Arbour’s Dear Fat People, I just knew I was going to be in for a treat. I was honestly hoping that it would be just as funny as many of the other “Dear So-and-So” videos that have gone viral over the last few years.

Unfortunately, It wasn’t funny. As a matter of fact, it was awful! It was so bad that I felt sorry for her. As a comedian, I know how hard it is for women to make it in this business. That’s why many of us get so consumed with “making it” that we cheapen our brands and do ANYTHING to get “put on.” In this world of Internet Celebrity where YouTube views equal development deals, Facebook shares create movie roles and Instagram “likes” lead to major product endorsements. It’s no wonder that a comedian like Nicole Arbour would create a video like this to get attention. But all attention isn’t good attention.

In her attempt to be funny, she perpetuated stereotypes and outright lies about overweight people. Even so, I totally believe in freedom of speech and that censoring her by yanking the video off YouTube is not the right move. I also understand that with freedom comes the possibility for backlash if people do not agree with how you feel. In some ways, political correctness has stifled our ability to have open and honest communication about how we REALLY feel.

I don’t know Nicole. Maybe she honestly thought she was being satirical, and that her video would change lives. Or maybe she is a mean girl who hates fat people. Regardless, here are a few things that I think she and others like her should know.

1. Fat Shaming IS A Thing

Her words: “Fat Shaming is not a thing. Fat people made that up. That’s a race card with no race.” How can you say something is NOT a thing, while you are actually doing it? Nicole Arbour’s video is a fat-shaming video, hands down. Her opinions about fat people speak to larger truths about size discrimination. In my opinion, it is one of the last accepted prejudices allowed in this country. When it comes to race, sex, gender and physical abilities, we have learned to be more tolerant as a society, but treating people wrongly because of their size is still fair game.

2. Shaming Does Not Work

Her words: “Shame people who have bad habits until they stop. If we offend you so much that you lose weight, I’m ok with that!”
Studies have shown that shaming people is the wrong move if you want to enhance someone’s personal development. If someone is truly suffering from an eating disorder or health related issue that results in weight issues, shaming them can actually make matters worse.

3. Skinny Does Not Equal Healthy

Listen, I have skinny friends that look healthy by appearances, but are not. You cannot tell if someone is healthy purely by the size of his or her body. I have skinny friends with diabetes, high blood pressure and who cannot walk a flight of stairs without falling out. On the other hand, I have friends that are sizes 12-24 that run marathons, participate in healthy activities and lead happy lives. We can all stand to make better choices for our health, no matter what size our bodies are. Sending the message that healthy has a certain look only leads to more discrimination.

Her words: “Plus size stands for plus heart disease, plus knees problems, plus diabetes, plus your family and friends crying because they lost you too soon because you needed to have a coke plus fries.” I think out of all of her so-called “truths” this one made me the most upset. To assume that the only way to be happy and healthy is to be skinny is totally wrong. There is nothing wrong with being plus sized. The body acceptance movement is a REAL THING. There are plus positive women who are truly making an impact and social media is just one of their tools. From events like The Fuller Woman Expo, Curvy Con and Full Figured Fashion Week, to social media campaign’s such as Lane Bryant’s #PlusisEqual, Tess Muenster’s #effyourbeautystandards and Wear Your Voice Mag’s #DropTheTowel are providing a platform to show that body confidence and loving our body are themes that all women need to embrace. I thank God that there are magazines like Plus Model Magazine, Slink and Daily Venus Diva that truly speak to showing the diversity in beauty. By embracing this movement, all women, no matter what size can feel good about loving themselves and living a fulfilled life!

5. Stay In Your Lane! With friends like you who needs enemies?

Sorry Nicole, my friends and family embrace me for who I am. I personally embarked upon a health and fitness journey because I wanted to, not because I have people in my life pressuring me to be a certain size. I wonder where your friends were when you were shooting this shameful video? If you really want to be a friend maybe you should mind your business and focus on your own flaws. Or better yet, get involved with the body confidence movement and learn that we all have value despite what our bodies look like.

Well they say it ain’t over till the fat lady sings, and since Nicole loves Big Sassy Black Women I dedicate this final high note to her! I hope her 15 minutes of fame from shaming others will soon be done, and she can get back to the business of doing her comedy without the cheap shots. The song is over. Now let’s all get back to loving life, and each other! 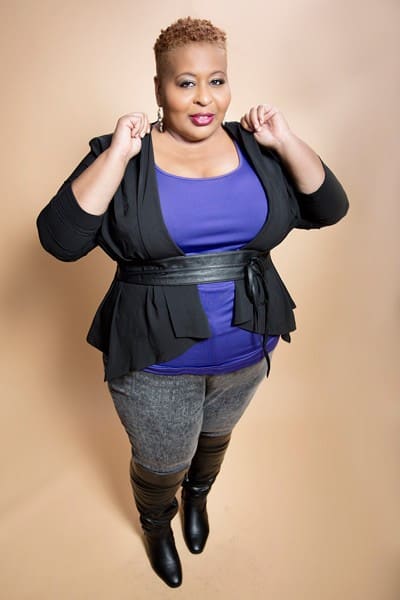 Erica Watson is a stand-up comedian, actress and director. Her one-woman show “Fat Bitch!” has sold out New York’s Laurie Beechman Theater, The Brooklyn Museum, LA’s Comedy Central Stage at the Hudson, Chicago’s Getz Theater and Stage 773. She’s appeared on NBC’s Chicago Fire, Fox’s Empire, TVONE’s Love That Girl, the Oscar nominated film Precious and is will be featured in Spike Lee’s upcoming film Chi-raq. Follow her at @ericawatson and on IG. Watch the video companion to her piece HERE.