For weeks, the fans and media have been trying to decode the meaning of the very cryptic 4:44 project. Billboards, teasers and TV spots during the NBA Finals led many to believe that the campaign was for a top-secret film starring Mahershala Ali, Danny Glover, and Lupita Nyong’o. Earlier this week, TIDAL confirmed that 4:44 would indeed feature new music from Jay Z, fueling suspicions that the mysterious rollout was all leading up to a new Jay Z album. Fortunately for Hov fans, that theory was right on the money.

Jay Z and TIDAL have officially confirmed that 4:44 is the title of Jay Z’s upcoming LP. The announcement also revealed that Hov’s 13th studio album will be available exclusively from TIDAL and Sprint at 12:01am ET on Friday, June 30. 4:44 is being described as the first in a series of exclusive releases that will be made available to TIDAL members and Sprint’s 45 million postpaid and prepaid customers.

“Today is an exciting day to be a Sprint customer,” said Marcelo Claure, Sprint president and CEO. “JAY-Z is a global icon and we’re giving customers an incredible opportunity to be among the first to experience his new album 4:44. Our loyal, existing customers, and customers who switch to Sprint, can experience the album exclusively, plus access a complimentary six-month trial of TIDAL HiFi, giving them access to content they can’t get anywhere else.” 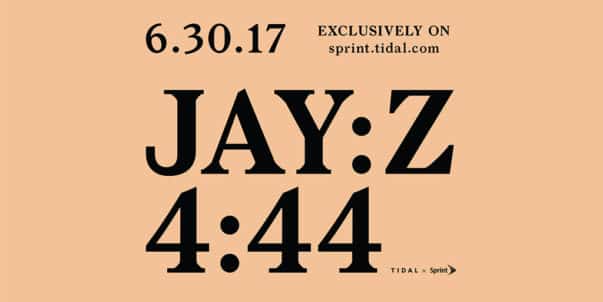 This past week has been full of headlines worth celebrating for Hov. Confirmation of 47-year-old Hip-Hop icon’s new album comes just one week after the Brooklyn native became the first rapper to be inducted into the Songwriters Hall of Fame; an accomplishment which garnered congratulations from President Obama. Jay Z’s Father’s Day was also extra special, as he and wife Beyoncé welcomed twin babies into the world last night.

For those hoping to hear 4:44 as soon as it drops, TIDAL is giving new members some added incentive to sign-up for the music streaming service. A free six-month trial of TIDAL Hi-Fi is available to both new and existing Sprint customers at sprint.tidal.com or by visiting your local Sprint store. The offer is also available to new Boost Mobile customers during in-store sign-up or at boostmobile.com.