Joseph Fiennes' Portrayal of Michael Jackson is An Act of Terrorism

When I first learned British actor Joseph Fiennes had been cast as Michel Jackson in a film about a road trip with Elizabeth Taylor, Marlon Brando, and the King of Pop after the September 11 attack in New York, I thought it was a joke, because clearly it has to be right?

Fiennes brushed off the original criticism with a cringe-inducing response. “[Jackson] was probably closer to my color than his original color.” And I mean, yes, Jackson’s skin went through a serious metamorphosis throughout his life, but the singer was crystal clear about not wanting to be portrayed by a White actor, because he was a Black man– vitiligo be damned. In fact, when a rumor circulated that he wanted a little White child to play him in a Pepsi commercial, MJ pushed back.

Still, British film house Sky Arts tried it by casting Fiennes in the half-hour comedy, and Michael Joseph Jackson did not leave Gary, takeover the world, and give us 40+ years of music to end up looking a mess in not one, but two TV projects–because we still haven’t forgiven Flex for this: 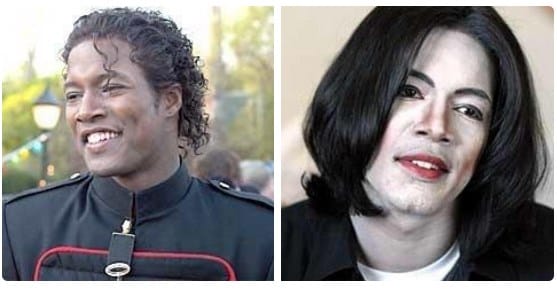 But powdery bullish aside. What Sky Arts and Fiennes did to The Kang is a travesty. It’s an abomination. It’s a straight up act of European aggression and terrorism against Katherine, Papa Joe, the Jackson 5, and all the ancestors of “2300 Jackson Street.”

Jesus take the wheel and crash this car. pic.twitter.com/5BqYJWStRC

@TheMJCast Horrible isn’t it. There aren’t even any nostrils on that nose. I can see exactly how this is going to go now.

@TheMJCast Horrible isn’t it. There aren’t even any nostrils on that nose. I can see exactly how this is going to go now.

Okay? But why does Joseph Fiennes as MJ look like the scarecrow you'd find at the edge of a pumpkin patch!? pic.twitter.com/OxFjP5SZQs

First images of #JosephFiennes as #MichaelJackson.

Your turn: What do you think of Fiennes as Michael Jackson?