Children across the country are celebrating as the school year comes to an end, but for one Bronx, New York teen, that celebration won’t happen because his life was cut short on Wednesday night when he was brutally stabbed to death during a wild machete attack that has rocked a community, left a mother in mourning, led to seven people being taken into custody and has social media users asking why.

If you have been on social media the past few days, you may have seen the hashtag #JusticeforJunior for Lesandro Guzman-Feliz, also known as Junior, who was killed after getting into an altercation with five men outside a corner store, commonly known as a bodega, in the Bronx. 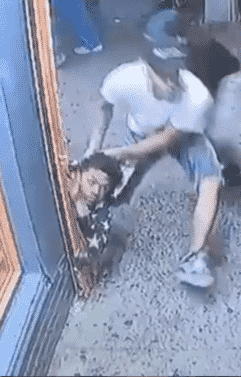 Surveillance video shows Junior being dragged outside the bodega while customers inside looked at him being stabbed multiple times before the men fled the scene.

He managed to get himself to the hospital where he later succumbed to his injuries, according to PIX 11.

“They killed not only my son, they killed me too,” his mother, Leandra Feliz, said. “I’m dead. I’m alive, but I’m dead too. I don’t feel the color nor the taste of life now. For me, this life is not happy.”

News of Junior’s death spread on social media, where celebrities such as Cardi B, who hails from the Bronx, and Rihanna posted their condolences online.

“[I] can’t stop thinking about this poor baby boy, and how his family must feel right now! I’m sincerely praying for your healing and #justiceforjunior,” Rihanna wrote.

“He was a good kid — always in my house, playing video games, playing with my kids, taking them to the park, always playing basketball … all the time,” an unidentified relative told the station.

Pictures of the five suspects were shared online and rumors popped up that they were part of a gang called the Trinitarios.

“They’re terrorizing the South Bronx,” Private Investigator Manuel Gomez told PIX 11. “And they are just as bad as MS-13.”

The gang’s leader reportedly apologized on Facebook, according to reports, saying that it was a case of mistaken identity and that Junior was not the intended victim.

The suspects believed that Junior was in a sex tape with the sister of one of the reported gang members something that police wasn’t able to confirm.

On Sunday in Patterson, New Jersey where Kevin J. Alvarez, 19, was arrested and charged with two counts of murder, manslaughter, gang assault and assault, according to law enforcement.

Six others connected to Junior’s death, Jose Muniz, Jose Taverez, Manuel Rivera, Danel Fernandez, Joniki Martinez and Santiago Rodriguez, were also arrested and a source told PIX 11 that an arrest was made in the Dominican Republic.

“His dream was to be a detective. Since he was 5-years-old, he liked to play with police cars. He would say, mommy, I want to be a police [sic] officer,” his mother said.

A GoFundMe Page was set up to help the family with funeral costs.