Kendrick Lamar is Lyrically Fired Up and 'Humble'

Whether King Kendrick Lamar is shooting darts toward Drake and Big Sean or not with his latest releases is still up for speculation – even though there’s some pretty solid evidence to validate suspicions.

But, what is absolutely without debate is that the Compton-bred emcee is lyrically fired up and no rapper is safe. In “Humble”, his latest rhyme assassination, K.Dot puts opponents on notice that they’re doing too much and need to recognize the real when it comes to his skills.

I get way too petty once you let me do the extras
Pull up on your block, then break it down: we playin’ Tetris

The flow could be viewed as a mockery to what’s been happening musically, with bragadocious rappers rushing to share monumental moments on social media as opposed to keeping their moves modest and on the “humble”. Peep the Obama reference and then think back to what followed after K.Dot’s meeting with the former Prez (no signs of posting from his accounts) and then actions taken after a certain somebody (hachew Champagne Papi) meet with the former First Family.

“This sh*t way too crazy, ayy, you do not amaze me, ayy
I blew cool from AC, ayy, Obama just paged me, ayy
I don’t fabricate it, ayy, most of y’all be fakin’, ayy
I stay modest ’bout it, ayy, she elaborate it, ayy

What Kendrick does in the Mike Will Made It-produced track is flip the script on his artist peers by giving them instruction while also boasting about his own lyrical prowess. The bars and imagery are aesthetically juxtaposed and it’s freakin’ amazing.

For example as he depicts “The Last Supper” while repeating “be humble”, K. Dot leaves a lasting impression before diving into the second verse.

If I quit this season, I still be the greatest…

Not only does he get the fellas rooting for him, but he smacks fakery in the face with bars and visual representation of the au naturale when it comes to beauty. 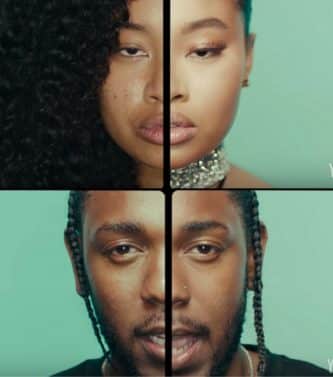 In his final blows on the track, Kendrick advises all to watch him speak from his soul and affirms that he’s “the realest n—a after all.”

Sheesh...April 7 is about to be insane!