In honor of Black Music Month, EBONY has placed focus on the underappreciated movers and shakers of the music industry including genre-bending artists, new gospel voices, and women shattering the glass ceiling.

Maya Angelou famously said about the magic of attaining your desires, “Ask for what you want and be prepared to get it.” Kesha Lee may have been unaware that her first step from radio intern to award-winning sound engineer happened when she dropped out of the University of Alabama at Birmingham because of a lack of interest in a traditional college experience and set out with the thought of wanting a career in music.

In 2011, before having credits on chart-topping hits including Migos’ “Bad and Boujee,” and Childish Gambino’s “This Is America,” Lee received a call asking if she would be interested in being a JET Beauty of the week, to which she agreed. At the time, she  dreamed only of becoming an audio engineer, saying over the phone, “I wasn’t in school or anything, and this photographer reached out to me and asked.”

In the seven years since being featured in the magazine, through the Law of Attraction, Lee went from unfulfilling jobs and nights of uncertainty about her career path to becoming the go-to hip-hop engineer for upcoming rap superstars including Lil Uzi Vert and Playboi Carti. As one of the few women behind the deck in the genre’s boys’ playground, she possesses the hands that are responsible for mixing much of the new wave of Atlanta’s signature rap sound.

When her parents learned of Lee’s early aspirations to become a singer, they encouraged her to play the piano. “Man, both my parents were so persistent about me playing, and now that I engineer I wish I had learned.,” the Birmingham native says. “It’s like a finger exercise, so it would have been dope to know it. I learned two songs, and then that’s it.” Lee’s rise to success was not an overnight story. She interned at a local station, where radio personality Buckwild noticed she was skillful in using software such as Adobe and had her speak to another radio host, Isis, who introduced Lee to engineering. “I think a lot of people just don’t know about engineering,” Lee said. “I didn’t know about it for the longest. I didn’t know what engineering was. I didn’t know that it was a career.”

Then in 2012, she moved to Atlanta, music’s rising cultural hub, and enrolled in the Atlanta Institute of Music and Media, which offers associate degree programs and certificates in recording, audio and music production.

One night while with friends, Lee was bold enough to approach Atlanta rap star Gucci Mane and procured an in-house engineering gig at his infamous studio, the Brick Factory. When discussing the studio’s impact on the music that comes out of the region, the 29-year-old said, “I just feel like that studio is significant because Gucci [is] the greatest street A&R.” Due to “Gucci’s ear for talent,” she was able to work with rappers including Young Scooter, Future, Young Thug and around “all the biggest Atlanta producers, including Zaytoven, Metro [Boomin’], TM88 and Honorable C.N.O.T.E.”

Lee was built up her résumé in that studio but isn’t blind to the fact not many women exist at the forefront of her field. “At school I [could] count how many females there were, and it wasn’t a lot.” She believes that had more to do with the lack of exposure many people have to the technical side of audio and she assures the landscape is changing. “I feel like now there are a lot of girls in school for it and girls who are artists wanting to learn how to record themselves,” she says.

Being a part of the music industry has also opened Lee’s eyes to just how many women are responsible for much of the background work. “There are a lot of female A&Rs, songwriters and producers.” She acknowledges other prominent female engineers, including Ann Mincieli, who owns Jungle City Studios in New York City and works with Alicia Keys, and Marcella Araica (aka Ms. Laga), who has engineered for Timbaland, Missy Elliot and Britney Spears.

Sometimes being the only woman in the room doesn’t bother Lee because, unlike the colossal music she mixes, she says, “I’m super quiet.” Regardless of gender, some hardships come with the job. “I’ve heard some horror stories from engineers about how artists will be verbally abusive to them,” Lee says. “You’re working on the music, so if you don’t keep up or know what you’re doing, it can be frustrating.” Lee scored her third placement on Billboard’s Hot 100 with “This is America” by Donald Glover (Childish Gambino), who played on the alleged abuse of engineers on “Money Bag Shawty,” episode three of the second season of Atlanta: Robbin’ Season.

Despite having engineered numerous gold and platinum record, Lee says she doesn’t “really think about how far a song is going to go or if it will chart or anything.” However, Gambino’s now-viral song stood out to her as “amazing” because “there are so many components to it.” In the five years she’s been a professional, most of her work comes by word-of-mouth, but she is unaware how the Grammy Award-winning musician acquired her service. “I don’t know if he looked up who worked on ‘Bad and Boujee’ or what, but that’s one person that I don’t know how that came about but it was dope as hell.” Glover notoriously shouted out the Lee-engineered Migos cut during his Golden Globes acceptance speech in January 2017. 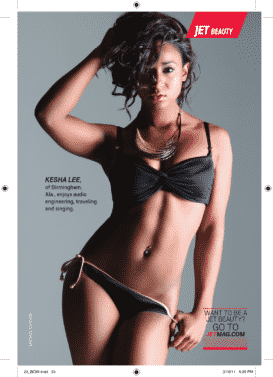 The sound engineer looks back at her feature in JET and is in awe that her bio reads, “Kesha Lee of Birmingham, Alabama enjoys singing, audio engineering and traveling.” Just less than a decade later, “it’s cool to have an interview with you guys and…I found my passion, and I’m doing what is in my bio. I’m engineering, I’m traveling, but I only sing in the shower.”

It’s been a short time since Lee began her journey but there’s more to come. In the next decade, she hopes to use her platform to help jump-start the engineering career of her assistant, Jessica Guiterrez, collaborate on the sonic direction of an artist’s entire project and travel the world to learn about cultures’ use of music.

Lee is a true testament to your thoughts becoming tangible. She created, visualized and worked on her dream and after some time it became her reality.