Kirk Franklin’s eldest child has accused the gospel mainstay of trying to kill him in a recent social media post.

Kerrion Franklin has been estranged from his father for years, according to Black Christian News (BCN), making an appearance on Instagram last month to make the bizarre claim toward the Grammy-winning songwriter.

In a now-deleted screenshot obtained by BCN, Kerrion calls his father “sneaky” while declaring, “my own father is trying to kill me.” 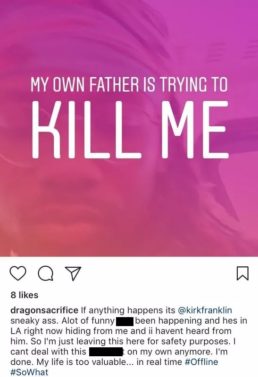 The accusation comes just one month after Franklin revealed his sister would be heading to prison for 30 years.  Although the gospel superstar didn’t go into detail, he stated plainly that it had been a “rough week” for his family after discovering how much time is sibling received.