From Lena Horne to Pharrell: Most Iconic EBONY Music Covers

Originally published in June 2018, this is the last installment of our 2018 Black Music Month series, in which EBONY has placed focus on the underappreciated movers and shakers of the music industry, including genre-bending artists, new gospel voices, audio engineer Kesha Lee and other women shattering the glass ceiling.

Since being published in 1945, EBONY has been one of the few publications to not only address issues within the African-American community but also promote the culture’s prominent figures. More than seven decades later, the magazine is still revered for its representation of Black life. Debra Lee, the former chairman and chief executive officer of BET Networks, talked about the impact it has had on her career. “Growing up I was a fan of beautiful brands like EBONY and Motown, that’s about all we had in Greensboro, [North Carolina]. Naturally, I was excited 32 years ago to join a Black-owned company that created content specifically for a Black audience,” Lee said while accepting her 2018 Ultimate Icon Award at the BET Awards on June 26.

On “Black Effect” from The Carters’ collaborative album, Everything is Love, JAY-Z raps, “hopping on a JET with my EBONY chick,” a clever wordplay giving a nod to his wife Beyoncé and the magazines, which have repeatedly featured both as cover stars.

As a tribute to the legacy of EBONY’s relationship with Black music, we share some of our favorite issues that feature musicians for Black Music Month. 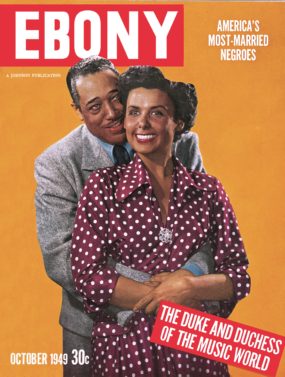 Several jazz icons have graced the cover of EBONY, including Billie Holiday, Nat King Cole and Billy Eckstine. Individually, Horne and Ellington also appeared on the cover several times throughout the years, however, the October 1949 issue is unique because it captures the essence of their longtime friendship, which started at Harlem’s Cotton Club, where Ellington played with his jazz orchestra and Horne began singing at age 16. 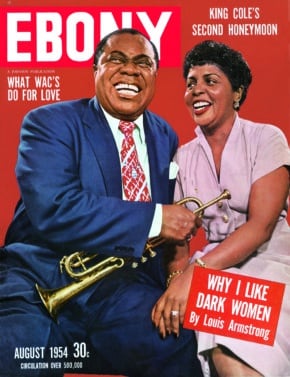 Throughout his career, Satchmo has appeared in and wrote for EBONY magazine. In August 1954, the trumpeter was both featured on the cover with his wife, Lucille Wilson, and penned the article “Why I Like Dark Women.” Wilson was the first dark-skinned dancer to break the color line at the Cotton Club. Because colorism is still an issue within the community,  to see this showing of Black love 60 years later is touching. 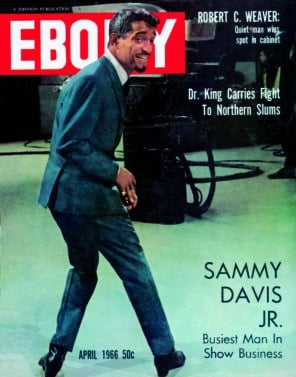 Davis, born in 1925 began his career in vaudeville at the age of 3. He transitioned into acting in 1933. Throughout the ’60s, Davis was a member of the Rat Pack, a group of entertainers including Frank Sinatra and Dean Martin, who appeared together on stage and in films. In 1966, Davis was dubbed “The Busiest Man in Show Business,” as the EBONY cover says, starring in the Broadway musical  Golden Boy, hosting his TV variety show, The Sammy Davis Jr. Show, while continuing to perform as a singer, dancer and comedian. 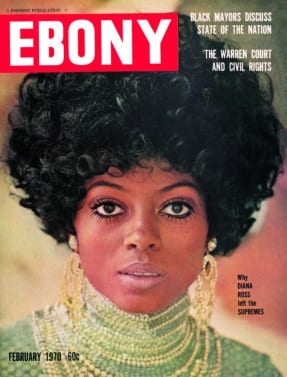 Ross rose to fame during the 1960s as the lead vocalist of the Supremes, the best-charting girl group in U.S. history and Motown’s most successful act. In 1967, the group was renamed Diana Ross & The Supremes and called that until the lead singer left in 1970 to work on her eponymous debut solo album, which released later that year. EBONY’s February cover story explained the reason for her departure from the group. The cover’s portrait of the “Ain’t No Mountain High Enough” singer is elegant and draws in viewers with her doe eyes. 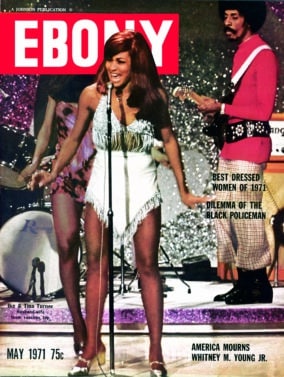 During the year this cover was released Turner was at the height of her career as part of a group led by former husband Ike Turner. In 1971, their biggest hit, a cover of “Proud Mary,” reached No. 4 on the Billboard Hot 100 chart and earned them a Grammy for Best R&B Performance by a Duo or Group. Later that year, their live album, What You Hear Is What You Get, became their first gold-certified project. The cover of the magazine depicts the electrifying presence of the Queen of Rock ‘n’ Roll onstage in the early ’70s. 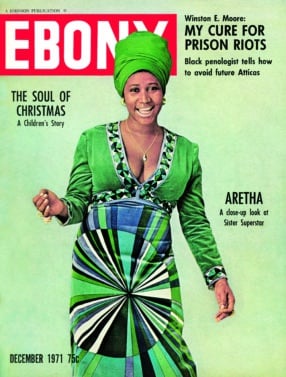 The Queen of Soul became the first R&B performer to headline at San Francisco’s Fillmore West, a historic rock ‘n’ roll music venue, in 1971. The vocal powerhouse appears on the December 1971 cover beaming with joy but also looking more like the girl next door than your lavish musical superstar.

Gladys Knight and the Pips, June 1973 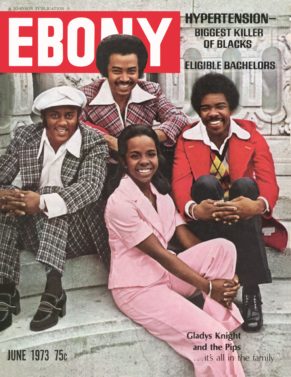 This cover features the R&B/soul musical family the year they left Motown for Buddah Records before the release of their hits “Best Thing That Ever Happened to Me,” “I’ve Got to Use My Imagination” and “Midnight Train to Georgia.” The photograph offers a clear look into the style of the era. 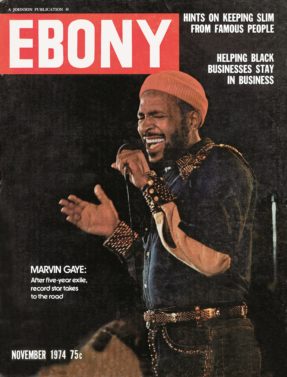 After fighting in the early ’70s for the release of “What’s Goin On” and scoring big with the chart-topping Let’s Get It On in 1973, Gaye embarked on his first tour in four years. The singer’s reputation as a great live performer was cemented during this time, and he toured throughout 1974 and 1975. The November 1974 cover catches Gaye in his soulful element. 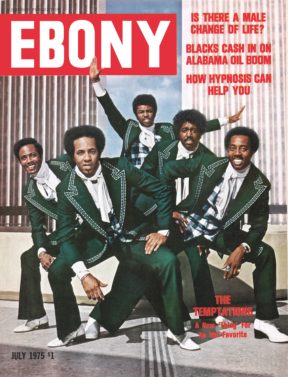 In January 1975, the group released A Song for You, the first album produced by Jeffery Bowen. The project features two R&B No.1 hits, “Happy People” and “Shakey Ground,” the Temptaions’ final No. 1 R&B song; and “Glasshouse,” their final Top 40 pop hit. The July 1975 cover showcases the group members at their best in matching suits. 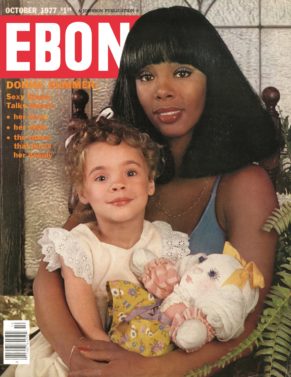 The Queen of Disco is featured on the October 1977 cover with her oldest daughter, Natalia Pia Melanie Sommer. The image is a powerful statement on remaining sexy as a mom. In 1975, Summer released her 17-minute single “Love to Love You Baby,” which generated controversy because of her moans on the record. Despite being banned on several radio stations, the song reached No. 2 on the U.S. Billboard Hot 100 and earned a gold record. 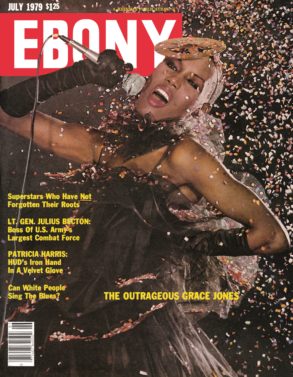 The Jamaican-born singer exists as her eclectic self on the July 1979 issue. In 1977, Jones inked a deal with Island Records and became the star of the New York City disco scene, often frequenting the infamous Studio 54. 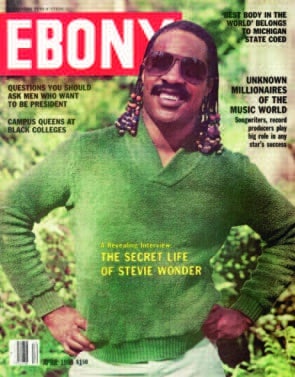 Wonder was already a 12-time Grammy winner and a staple in Black music, but 1980 is when he’d secure commercial success, rising in fame and achieving his biggest hits. That year’s April issue of EBONY is prerequisite into the life of the superstar, for anyone who just joined the party. In September, the singer would release his first platinum-selling album, Hotter Than July, featuring the single “Happy Birthday,” which he used to help  establish Dr. Martin Luther King’s birthday as a national holiday. 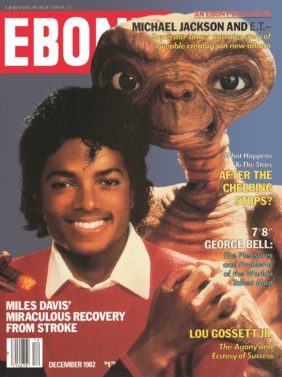 Jackson appeared on EBONY covers both as a member of the Jackson 5 and as a solo artist. This cover is particularly memorable because 1982 was the year the pop icon narrated E.T. the Extra-Terrestrial, the audiobook and soundtrack for the Steven Spielberg-directed film of the same name. It was released just months before the King of Pop’s acclaimed  Thriller, which remains the world’s best-selling album. The soundtrack earned Jackson a Grammy for Best Recording for Children.

The year 1984 belonged to Prince. He released Purple Rain, an album regarded as one of his best works (and starred in the  movie of the same name). The project was later certified diamond and the world’s third best-selling soundtrack. The first two singles, “When Doves Cry” and “Let’s Go Crazy,” topped U.S. single charts. “Purple Rain” ranked No. 2 on the Billboard Hot 100. 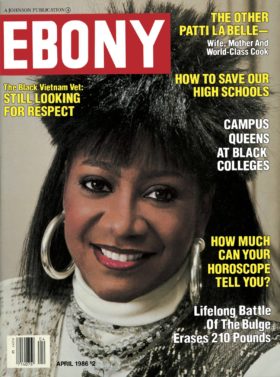 This issue catches LaBelle outside her music career and takes a look at the family woman and cook who would later become known for her world-class meals and pie. In 1986, the singer’s album Winner in You peaked at No. 1 on the U.S. Billboard 200 chart and included the No. 1 hit single “On My Own.” It was the only album from LaBelle to chart overseas. 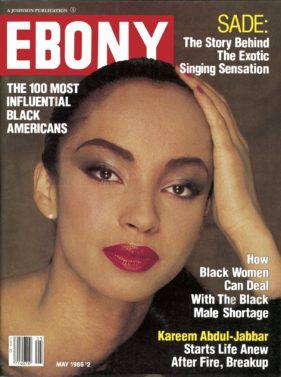 Looking back to 1986, it does not seem as though Sade, now 59, has aged. In the early ’80s, she became a backup singer for the British band Pride. After the release of the 1984  single “Smooth Operator,” the vocalist gained her own attention.. In 1985, she released her sophomore album, Promise, which became her first album to reach No. 1 on the U.S. Billboard 100, in 1986. Though Sade was a household name in Europe at the time, EBONY’s cover gave a background story to the rising American interest.

The youngest Jackson’s third studio album, Control, released in February 1986 and became her commercial breakthrough and propelled her into the realm of popular music. 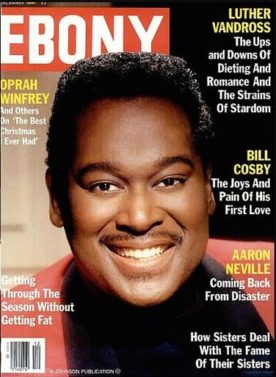 The Bronx, New York-born singer had a breakout career in the ’80s and became known as “the best voice of a generation.”  Vandross’ sexuality and fluctuating weight were often topics of speculation. Despite dealing with the lack of privacy that comes with stardom, the cover features his signature smile. 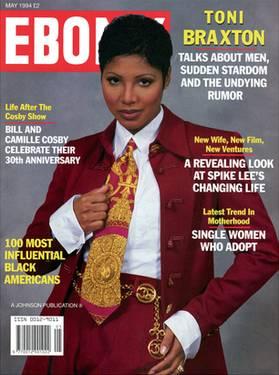 After being catapulted into the spotlight with the release of her self-titled debut album in 1993, Braxton made her first appearance on an EBONY cover in this May 1994 issue. Her pixie haircut coupled with her menswear outfit are great representations for the power of her raspy voice. 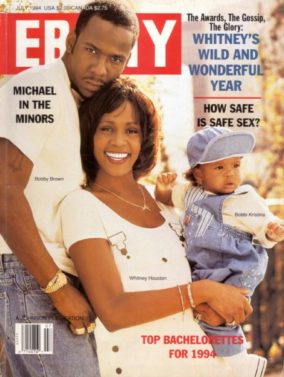 Houston landed herself on the cover of EBONY a number of times before this July 1994 issue. The most notable aspect of this cover is the family element featuring Houston at the height of her career; her husband, Bobby Brown, whom she referred to as “the original king of R&B”; and their daughter, Bobbi Kristina. 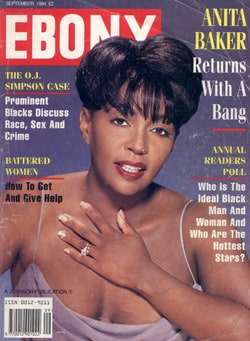 After starting her career in the ’70s, Baker took a break from music in 1991 to focus on her family. Three years later, she would return to the charts with her fifth album, Rhythm of Love. The project featured the hit single “Body and Soul,” her first top 40 pop hit since 1989. After giving birth to a boy in May 1994, she elegantly graced the September issue of the magazine. 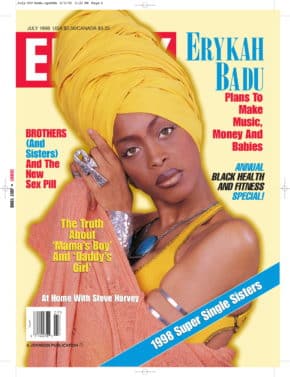 The Queen of Neo-Soul released her debut album, Baduizm, in February 1997. It went triple platinum and served up hits including “On & On” and “Next Lifetime.” In November, her first live album, Live,  was released and was certified double platinum. The July 1998 cover issue highlights Badu’s earthy personality and carefree nature. 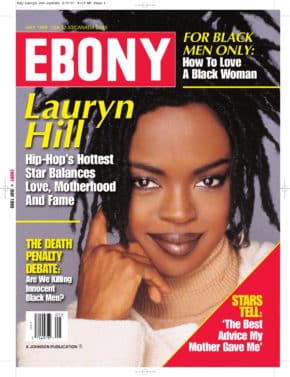 In 1998, Ms. Hill released her only solo studio album, The Miseducation of Lauryn Hill. The critically acclaimed project earned her five Grammy Awards in 1999, including Album of the Year, making Hill one of 10 Black artists to take home the coveted award. 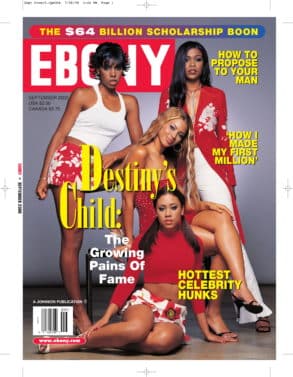 Despite the success of its second album, The Writings on the Wall, the group, originally made up of Beyoncé Knowles, Kelly Rowland, LaTavia Roberson and LeToya Luckett, faced internal conflict. The EBONY cover features Roberson and Luckett’s replacements Michelle Williams and Farrah Franklin. Franklin quit after a few months, creating the iconic trio we know today. 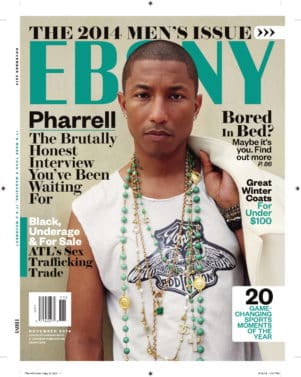 The producer appears on the November 2014 issue after the release of his second album, Girl, which received backlash over the lack of dark-skinned women on its cover. The criticism and social events surrounding the death of Mike Brown, the 18-year-old gunned down in the summer of that year  by Darren Wilson in Ferguson, Missouri, led Pharrell to be the center of a political conversation, which was in drastic contrast to the dialogue around his debut solo album, In My Mind (2006).

To millions of Mary J. Blige's fans, she is R&B royalty whose empathetic voice belting out pain and heartbreak has helped them through life's worse trials: breakup, betrayal, addiction and abuse. She presides over a music genre that has lost so many of its most talented players.