A One on One With LeToya Luckett

Speaking with an artist after they have just released an album is an amazing thing. I was blessed with the opportunity to chat with the beautiful singer-songwriter and actress Ms. Letoya Luckett. I could feel the positive energy and excitement in her voice as I tried to contain mine.

If you are late to the party, Back 2 Life is everything! The 13-track LP will take you on a roller coaster ride of emotions with a musical genius. Get into it. Below is a little taste of her sound.

Enough with the small talk, let’s get into this interview. Letoya gave us insight into the workings and motivation behind her album, handling public break ups (JUICY) and more.

EBONY: Can you talk about your new album and let us know what listeners should expect from this new project?

LeToya Luckett: Man, this album, I can’t even. It’s hard for me to even process that it is out because it’s taken eight years. I don’t think it’s even hit me that I have music back out there. And it’s not that I strayed away from music at all. I was just trying to find a balance between my acting career and just making sure that I didn’t just put anything out, you know? Because people have timelines. But, I just feel like right now is a perfect time. It’s God’s timing and I’m excited. I’m excited to have music out, man.

EBONY: What was the creative motivation behind Back 2 Life and what was the reasoning for the title?

LeToya Luckett: Getting back to my first love. I think music has always fed me, you know what I mean? It’s healed me. I’m just in a different space in my life right now. I’m definitely more confident. I’m definitely walking in my truth. With this album when I started the process, I was like, “You know what? I’m not gonna be scared. I’m not gonna be scared to sing this song, to talk about this subject … I want to be open. I want people to hear my heart. I want people to know my truth. I want people, I want the ladies to know I’m right there with you. I’ve gone through it before, too.” I feel like I did that with this album. I feel like I accomplished that in allowing people to see another side of Toya. A vulnerable side, an honest side. A confident side. I think that that’s what’s necessary in music today.

EBONY: If you could pick one song off the album to really represent your current state of mind or where you are in life, what would it be?

LeToya Luckett: “I’m Ready.”  It’s a song that gets me groovin. It’s sexy; it’s on. It has that Marvin Gaye feel to it, and I feel good when I listen to it. 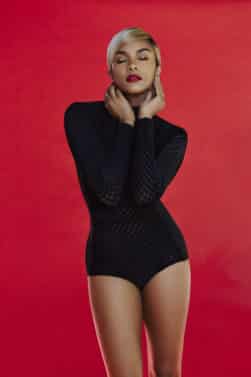 EBONY: You recently went through a very public breakup, what advice would you give someone on how to handle similar situations?

LeToya Luckett: It’s never easy, especially matters of the heart. For me I love very, very hard. So I will say take your time and be okay with where you are right now. Don’t try to rush that feeling of, “I gotta get better, I gotta get better.” Now, have it in the back of your mind that, “I’m gonna give this a little bit of time. I’m not going to live in this space,” but at the same time, acknowledge where you are right now. Acknowledge whether it’s over, and if it is over, then learn the lesson from it. You know what I mean?

Operate out of love, too. Don’t try and do things out of spite or anger. Even though that person has hurt you or whatever it is. You gotta forgive, man. Don’t carry that stuff with you. It’s heavy. Especially something that I’m sure you’ve invested your time into. That’s heavy stuff, but you gotta release it. You gotta forgive. You gotta move on from it and wish that person the best, man. Even with things that I have gone through, I don’t like being public and going off saying crazy stuff and drawing negative attention to it. That does not do anything to you. It doesn’t help your process in healing, either.

EBONY: Can you tell me five things that most people don’t know about you?

EBONY: What are some goals you would like to achieve by the end of the year?

LeToya Luckett: So one of them was already accomplished. I put my album out, woo-hoo!  I want to start on a script for maybe a TV show.  I caught the bug by creating my mini-series and producing that. Of course my album just came out, but I want to be on a tour. I need to get around this world. Not just this country, I need to go around the world singing my songs.