March is Endometriosis Awareness Month and according to the U.S. Department of Health and Human Services, more than 6 million women in the United States suffer from the disorder. Actress and Cooking Channel host Tia Mowry has been vocal about her battle with the condition, which can cause cysts and scar tissue to develop, often resulting in severe pain. On the advice of doctors, Mowry changed her eating habits by giving up dairy, refined sugars, and processed foods to ease her endometriosis symptoms. The results of her dietary change led the Tia Mowry at Home star to create a new cookbook called Whole New You that’s geared to help those fighting health issues, like endometriosis, by showing them how changing the foods they eat can help them find some relief.

EBONY caught up with actress to discuss her journey with endometriosis and how revamping her diet changed her life.

EBONY: How did you discover you had endometriosis and how did it lead to you creating this cookbook?

Tia Mowry: One of the main reasons that I decided to write this book is to inspire and to encourage other women; and to help educate the masses about how food is medicine. This is my personal journey, I actually went through this. I was diagnosed with endometriosis in my mid to late 20’s. I had no idea what it was. I had just gone through having very painful menstrual cycles. I talk about it in the book about how it was so painful it would interrupt my daily activities. So I went to my family doctor, and she would just say these are menstrual cramps, you’ll get through it and would say take a hot or cold bath. She was just throwing everything at me and nothing would work. I was referred to Dr. Kent who is an incredible gynecologist. She did an ultrasound and said “you have endometriosis.” You can only be diagnosed with it when they do surgery, but he knew because of the way my uterus looked. She was like you have to have surgery. I had never had surgery before, never had anesthesia; so of course this was a scary moment for me.

After getting in there and seeing all of the scar tissue, she recommended for me to change my diet. After the surgery I felt better. Then as months went by, I started having symptoms again and the pain was so bad, that I still remember it to this day. It was after the first surgery, I was in so much pain that my sister and I were taking a meeting together for some animated series and I just couldn’t stay still because I was in so much pain. I had to go home and get on a heating pad. I told my doctor and she said you have to have another surgery. She went in, saw the scar tissue had built up, and said this is going to be a repetitive cycle if you do not change the way you eat, and if you want to have children. So as I got older wanting to have kids, I was like I have got to get this right. So that’s when I finally got on the diet; which are basically the things in my cookbook. I ate these same types of foods. I didn’t have any more endometriosis symptoms.

EBONY: Endometriosis can affect your body in so many ways. How did changing your diet lead to the types of recipes you included in the book?

TM: It can get really bad. When I got pregnant, I had a scare of having an ectopic pregnancy because of my endometriosis. So it also doesn’t just affect your uterus. It affects your intestines, your eyes, all of your organs. Endometriosis is an autoimmune disease basically.

I met with Donna Gates, who also has a book out called The Body Ecology Diet. She opened up a whole new world for me. She told me how you can suppress some autoimmune diseases by lowering the amounts of certain foods that causes inflammation in your body. The number one thing that exacerbates inflammation in the body is dairy. There’s other books out there that teach you about food and health and then leaving you hanging without any recipes or they give you boring recipes with bird food. That’s why this book is so good, because you can still eat fried chicken. Instead of using milk you can use unsweetened cashew milk. So my point is that it’s all about how certain foods like dairy, sugar, and certain foods can in fact speed up whatever illness you have and the healthier alternatives can suppress it. 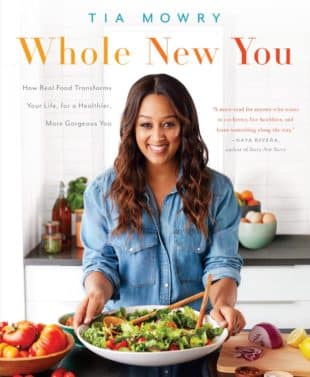 EBONY: In Whole New You not only are you educating readers about what happened to you, and then you break it down into health and nutrition, with lots of recipes. For people that are challenged in the kitchen, are those recipes easy to make?

TM: Oh yes! Now when I went on this journey myself, it was all about educating myself and there were several books that I purchased that will remain nameless. I was so disappointed because most of the ingredients in there was stuff I couldn’t even pronounce. I was like what? How am I supposed to get this ingredient? You want me to fly to Japan and get this? I don’t even know what this is! (laughs) So for me, it was all about simplifying it and choosing recipes that were recognizable with our culture, our generation and not be put off by it. So it’s all about giving different options and creating an alternative. I’m all about practicality even on my cooking show. Ain’t nobody got time to be in the kitchen for four hours! (laughs) So creating the really easy, practical recipes, like the banana pancakes, is really easy. I also find that cooking healthy is easier than if you weren’t cooking healthy. Everything is so fresh so there’s not too much cooking time.

Shameika Rhymes is a journalist of all trades. She can usually be found producing television news and has written for outlets like Charlotte Five, Sheen Magazine, JETMag.com, SoulTrain.com, WEtv.com and her own website, www.themofochronicles.com. Follow her on Twitter @Mofochronicles @WriterShameika