Season Two of Luke Cage goes deeper and darker into the nuances and complexities of Black life. The superhero tropes of the Marvel Universe are supplemental to the cultural and social themes of being Black in America. One of the first scenes opens with Cage listening to Mobb Deep’s “Shook Ones, Pt. II,” and is a subtle indication of the heaviness to come. The song is a mirror into the season because it was an anthem of the ’90s, an era in New York City where inner-city youth fought for financial freedom while battling regional warfare and the shift of the structure of household after the crack epidemic. A history many are still trying to rewrite.

The show quickly picks up with Cage (Mike Colter) being the famous Harlem vigilante. He’s acquired a certain level of celebrity and is in a budding relationship with Claire Temple (Rosario Dawson). Everything seems bright, but he is soon faced with the consequences of the neighborhood’s past. John McIver, (Mustafa Shakir) the Jamaican badmon known as “Bushmaster,” comes to do right by his family and reclaim their empire from Mariah Dillard (Alfre Woodard).

All out war begins, and it becomes too much for the hero to tackle because he is still working on the strained relationship with his father and the introspection of what it means to be a superhero, while his antagonists are fighting not only for territory but the American Dream. The attainment of wealth is seen as an escape from social oppression for the African-American, Jamaican, Hispanic, Chinese and Italian gangs. As a result, the show captures the diversity of New York City culture.

That isn’t the only thing Luke Cage gets right. Here are other themes the season does well:

Feel the rhythm. Hear from the musical acts featured in #LukeCage. pic.twitter.com/u4dYA9chGl

“The genius of Wu-Tang is they know that half the audience has never been to the projects, and has no idea what they’re talking about. They’re just creating a world and that’s what we’re trying to do.” – Cheo Hodari Coker

Season One established hip-hop within the Marvel Cinematic Universe. Every episode of Season Two is named after a Pete Rock & CL Smooth song, just as the first season’s songs are titled after Gang Starr music. Black music from across the diaspora is explored and reggae becomes a central theme with the introduction of Bushmaster.

The music sets the pace of the story instead of simply being background for a scene. There are references made in the script to artists including Prodigy, Method Man and State Property. The season also features performances by Gary Clark Jr., Faith Evans, Ghostface Killah, Stephen Marley, Esperanza Spalding, Jadakiss, KRS-One and Rakim, who wrote an original piece for the season finale.

Cage’s heroism is symbolized by the bullet-riddled hoodie, which represents Trayvon Martin and the Black Lives Matter movement. An indestructible Black man becomes the face of resistance, and the season delves deeper into what it means to be a Black hero. Unlike the other superhero series on Netflix, such as Iron Fist, Jessica Jones or Daredevil, Cage’s heroism is intertwined with the struggles of his race. He has to deal with social media, fame, gentrification and how to make money while sacrificing for the greater good of Harlem. The latter is often a discussion within the Black community when it comes to Black activists and the ethics of receiving money or sponsorship.

There’s power in the way the comic hero grapples with finding a balance between personal survival, race and heroism in this season.

“A lot of people had to die to make this family what it is.” – Mariah Dillard

Several mainstream shows present the surface of a version of Black life. If an African-American person is seen as good or bad, he or she is portrayed as coming from a good family or broken home, respectively. This season throws that stereotype on its head as almost every Black character comes from a family that experienced trauma, which is used to rationalize decisionmaking. Cage’s need to be a hero is rooted in his need to be seen by his father, Pastor James Lucas (Reg E. Cathey). All of the members of the Stokes and McIver families are trying to uphold or run from their family name. Each main character gives a monologue about family that is rooted in the effects of slavery or imperialism on the function of the Black family.

“Blackness is always a superpower. Period. Being Black gives you a confidence in the world that you will find your own way of reinterpreting something.”- @cheo_coker 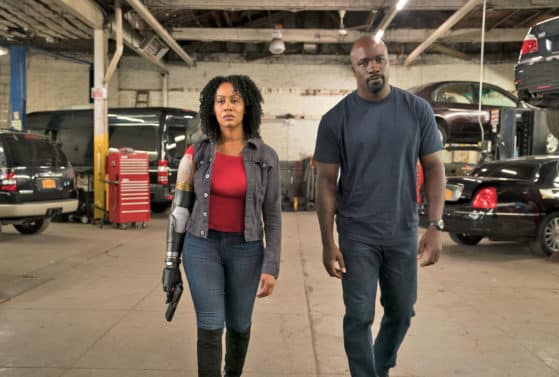 While the show focuses on a Black man as a hero, this season does a fantastic job solidifying women as the silent heroes of society. Claire and Tilda  (Gabrielle Dennis) are health-care professionals who, at different moments, keep the men of the series alive. Misty (Simone Missick) fights for justice while learning to live with one arm. Dillard grapples with motherhood, the trauma of sexual abuse, and is a direct counter to the angry Black woman trope—she’s “got a lot to be mad about.” Despite their struggles, the season is a testament to women being the real backbones of a patriarchal society. Without them, men would lack the conscience that pushes them into action. Even Bushmaster’s mother, who isn’t a physical character, is an integral part of his plight.

Season Two is a satisfying watch but can be too slow at times with a great deal of filler material making up its 13 hourlong episodes, which is a problem with most of Netflix’s Marvel series. If you, like me, are of Jamaican ancestry, the accents can come off as unauthentic. However, if you are a fan of the series, this is a solid follow-up to Season One, with good acting and more Blaxploitation.