A photograph of Drake donning blackface surfaced as the cover art for Pusha T’s “The Story of Adidon,” a diss track that takes direct aim at the Canadian rapper, has many people upset, but Lupe Fiasco has come forward to give context to the image and its artistic purpose.

Please stop referring to this picture as “artwork”…I’m not an internet baby, I don’t edit images…this is a REAL picture…these are his truths, see for yourself https://t.co/gd6vRS3HM8 pic.twitter.com/2el58HEZ8F

After releasing the song last night (May 29), fans began to accuse Pusha T of photoshopping the image of Drake in blackface for shock value. However, the G.O.O.D. Music rapper clarified that he doesn’t “edit images” and that the picture is “REAL.” After being asked about the controversial images by a fan, Lupe Fiasco revealed the there were two photos of Drake in blackface that served to present a different message than just the one Pusha shared. 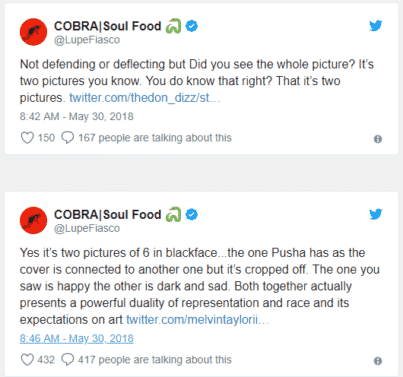 “Not defending or deflecting, but did you see the whole picture,” Lupe asked. “It’s two pictures you know. You do know that right? That it’s two pictures.” He continued: “Yes it’s two pictures of 6 in blackface… The one Pusha has as the cover is connected to another one, but it’s cropped off. The one you saw is happy; the other is dark and sad. Both together actually presents a powerful duality of representation and race and its expectations on art.”

The Chicago rapper explained that Drake’s photos are a form of artistic expression, in the same way, Pusha’s use of an image of Whitney Houston’s drug-riddled bathroom for his DAYTONA album cover is. “Last time I checked 6 was a mix of 2 of the most hated races on earth. Made an artistic gesture in those photos. Pusha let Ye put a stolen photo of Queen Whitney at her worst as an album cover as an artistic gesture. I can see validity in both.”

Lupe’s reveal that there are two images is correct. According to Hip Hop-N-More, the pictures of Drake are from a 2008 lookbook for the Toronto-based brand Too Black Boys taken by David Leyes. The two photographs feature Drake wearing a “Jim Crow Couture” t-shirt with one featuring him expressing happiness and the other sadness. Leyes defended the image on his Instagram. “Ask Drake… I captured his idea,” he asserted. “I’m proud to be part of a strong statement made by a black man about the f**ked up culture he is livin in.”

Leyes has since had the image removed from Pusha T’s page. Drake has not commented on the controversy over the photos.