In 1973, 46-year-old trumpeter Miles Davis wanted to connect more with Black youth. His iconic albums like Kind of Blue and ‘Round About Midnight had defined jazz for the past 15 years. Never wanting to be boxed into the “jazz” ghetto (he hated the term “jazz,” by the way), he defied convention again with On the Corner, an album of unsettling funk and unapologetic Blackness. It stood shoulder-to-shoulder with Head Hunters, an equally funky album that year from Davis’ former pianist Herbie Hancock.

Fast forward to 2016 in Los Angeles, where 38-year-old pianist/composer Robert Glasper is embarking on co-producing (with Terrace Martin) Hancock’s next album. Glasper, a Blue Note recording artist, has been following Davis’ eclectic philosophy by incorporating different sounds and textures into his repertoire. So far, it has served Glasper well, earning him back-to-back Grammy Awards for his genre-bending Black Radio albums. Glasper’s keyboards are also all over Kendrick Lamar’s To Pimp a Butterfly, helping it to become a modern day classic that transcends hip hop. Hancock, undoubtedly, also recognized the presence of his former mentor’s progressive sound in Glasper. Sony Music did as well.

After asking Glasper to compose and curate the score for the Davis biopic, Miles Ahead, Sony gave him another dream project–a Miles Davis remix album. Glasper agreed, but opted not to “remix” Davis’ music, but to reimagine it into new music instead.

The result is Everything’s Beautiful (out May 27), an 11 track exploration of improvisation and adventurous song structures, featuring an eclectic array of superstar guests, including singers like Erykah Badu, Bilal, and Stevie Wonder alongside rappers Phonte and Illa J.

With Everything’s Beautiful, Glasper was granted unprecedented access to Davis’ vast music vault. He chose to select more obscure tracks, and alternate versions of well-known songs, to give the listener a fresh perspective on Davis’ versatility.

“There’s no reason for me to do ‘So What’ again,” Glasper explained. “Miles has an extensive catalog; there are a lot songs. So, let’s dive into some of those songs that people don’t know.”

Glasper hand-pick each guest vocalist to guarantee the successful execution his vision of a new creation based on the foundation of Davis’ ideas.

“I purposely chose people who love Miles,” Glasper said. “I wanted it to be a labor of love, to be a way for each artist to express themselves and express how Miles influenced them and express their love for Miles in their own way.” 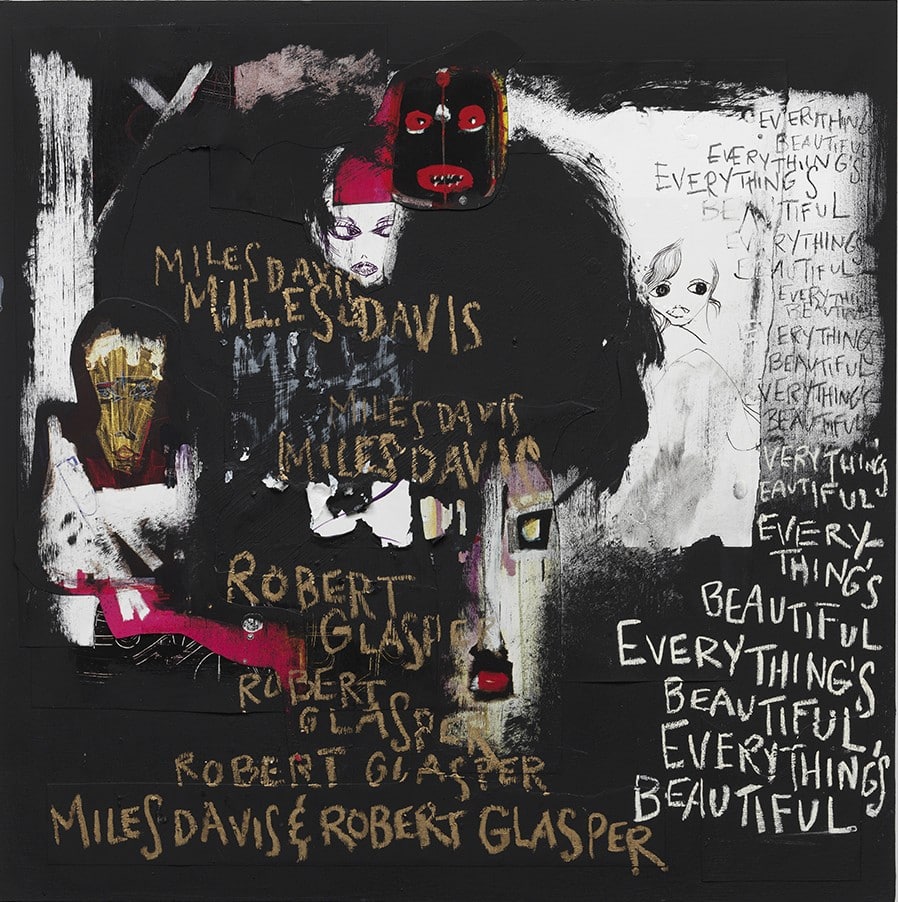 A perfect example of that expression is the album’s first single, “Ghetto Walkin,’” based on an outtake from In a Silent Way, “Ghetto Walk.” Glasper places a plaintive loop of a Rhodes over a groove-laden drum beat, with astral vocals from Bilal, who Glasper calls his “favorite singer.”

“Bilal has the highest musical IQ of any vocalist I’ve ever worked with. What I mean by that is he only does what’s needed,” Glasper said of his friend and fellow jazz fan. “He approaches every song he sings like acting, like this is a role I’m playing and this is the best way to bring this scene alive. He’s like Prince in a way. Prince could really sing, but he don’t be really singing on all his songs; he gives you what’s needed for that particular song and that particular story. That’s what I love about Bilal.”

What makes Glasper the perfect musician to tackle Davis’ work with such ambition is his embrace of the diverse influences around him. Davis himself was heavily influenced by Jimi Hendrix and James Brown as he was making his seismic transition into the fusion scene. Glasper has his own iconic figure to chase in late producer/beat-maker J Dilla, with whom he worked in 2001. Their relationship opened musical doors to Glasper that he didn’t know existed, leading to him to expand his own sound.

A virtue that Dilla and Miles shared was open-mindedness and versatility. Davis’ albums– from Kind of Blue to Sketches of Spain to Jack Johnson–couldn’t be any more diametrically opposed, and that’s what Glasper appreciated about Dilla.

“There’s some stuff Dilla did that no one’s heard yet that’s weird as hell,” Glasper revealed. “I’m like, ‘Wow! That sounds different than ‘Stakes is High.’ That don’t even sound like the same person. I feel like those two cats are the same in that respect, where they’re always searching for the next thing. They’re never complacent at all. Ever.”

Stagnation is something Davis fought against as an artist. Instead, he always tried to be a reflection of what was going on around him.

“He wanted his music to be social music; it was all about the audience and getting a bigger and broader audience,” Glasper said. “That’s why he didn’t like the word ‘jazz.’ He felt like it minimalized what he was doing because of what people thought and the perception of the word ‘jazz’ was/is.”

According to Glasper, innovation in the genre all but ceased in the 1980s, which he argued is the reason jazz is mostly consumed, and controlled, by older people holding onto tradition today.

Glasper contends that he and a small contingent of his contemporaries –citing Esperanza Spalding and Christian Scott among them – are “trying to turn it around.” He confesses, however, he still has to compete with the ghosts of jazz’s past on the Billboard and iTunes charts. He may been number one today, but Kind of Blue will be back shortly after.

What ultimately keeps Glasper on the cutting edge more so than most jazz artists today is his dedication to the muse. Whether reimaging Miles Davis’ tracks, covering Radiohead, or writing new material, Glasper surrenders to divine inspiration, regardless of when and where it comes, often running to a quiet place to sing or hum melodies and rhythms into his phone; a method he stated accounts for “95 percent” of his work.

“Most people compose when they sit down at their instrument,” Glasper said. “They say, ‘I’m going to sit down at 2 o’clock at the piano and try to write a song.’ But that’s not when the universe decides when it’s going to give you a song. I feel like the universe gives you a song when you’re walking down the street, when you’re on a bus, when you at a urinal, peeing. You can ignore those, because those are the gems because they come out of nowhere, to you.”

Glasper’s Miles Ahead score and Everything’s Beautiful album are equal hybrids of Davis and himself, but he’s not through with Miles just yet. This fall, Glasper will put on a new hat, as professor at New York University. He’ll be teaching a course on the trumpeter, exploring his musical eras and how his life influenced those eras. The Grammy-winning pianist feels that youth need to understand not only Davis’ music, but also his approach, which will lead them to innovate rather than re-do–something Glasper will continue to do himself.

“That’s my whole thing right now – making the audience bigger and getting my word out to a bigger platform and inspiring young people to have courage to be themselves within the music,” Glasper stated. “Miles was the epitome of that. Personally, he’s my hero in the way he maneuvered through the main rooms in the house of Black music.”