Naomie Harris is a true thespian, taking on an assortment of roles over the span of her nearly lifelong career. Here, the Oscar nominated star chats with EBONY about transitioning from her very dramatic role in Oscar-winning film Moonlight to the action-packed Rampage, co-starring Dwayne “The Rock” Johnson.

When you first read the script, what attracted you to the role of Kate Caldwell?

I worked with Bo Flynn, who is one of our producers, 15 years ago on After the Sunset, which was my first ever Hollywood movie. He was the one who approached me about playing Kate, and I loved the idea of working with him again.

Also, I had just come off of Moonlight, and it was just such a completely different role. After having done something so gritty, earthy and real, I wanted to do something fun and light-hearted, and Kate offered me that opportunity.

I also love Brad Peyton, he’s a brilliant director and he’s so passionate! What I really appreciate about him is that he knows how to make these big, action-adventure, blockbuster type of movies, but he also adds heart to them. He knows that people still need to see real relationships between characters and how important it is for them to be well-rounded as human beings.

Were you aware the film was based on a video game before signing on?

Did you ever get to play the game growing up?

No, it’s not something I ever played, but I was aware of it. The guy who actually invented the video game, he came on set and he was really emotional, he had tears in his eyes. It was his vision coming to reality.

It’s wonderful, because there are actually a lot of call backs and references to the video game in the movie, so gamers are going to get a lot out of the film and will probably catch some things casual movie goers may miss the first time around.

You’ve been acting for most of your life, taking roles in all kinds of films, but many of your fans recognize you most for your dramatic work. How do you compare the experience of working on an action-packed film like RAMPAGE and more dramatic roles, such as Moonlight or Mandela?

Each project is completely different from the others. Personally, I feel the tone of a film is set by the director, so it’s all about their vision and passion and where they want to take it. Brad sets this really fun, playful tone, so it was very different experience. It wasn’t as intense or serious, but the results are no less brilliant.

How was your experience co-staring alongside Dwayne Johnson in this film?

It was fantastic working with Dwayne, I learned so much from him. The biggest take-home for me was just how much respect he has for his fans. I’ve never worked with an actor so in-tune with what his fans want and need in a movie, he’s all about delivering for them, which is really special and selfless in a way. 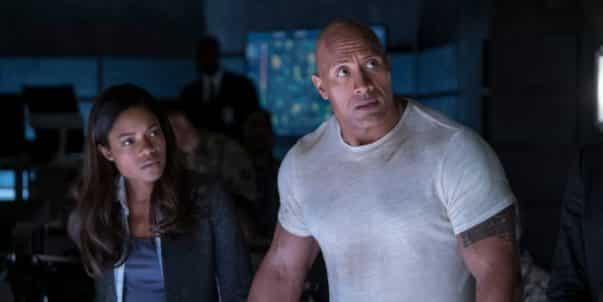 What do you think is the message RAMPAGE sends in regards to how we treat the animal kingdom?

I think the message is that animals have beating hearts! They have brains and are sentient beings, and therefore, we should treat them with greater respect, love and care. It’s a really powerful message.