Nas Reacts to Comments Accusing Kelis of Lying About Abuse

Rapper Nas has not officially addressed the allegations of physical and emotional abuse made by his ex-wife, Kelis. It appears, however, that he has interacted with fans on his Instagram page who have alleged that the singer-turned-chef is looking for a payout or is lying about the ordeal.

So Nas’ response to allegations of domestic violence is to post an old shot of him and their son while co-signing shots of his ex-wife? pic.twitter.com/MueoyaYRVz

Writer Michael Arceneaux posted screenshots on Twitter of the rapper responding to comments about the “I’m Bossy” singer under a throwback photo of Nas and the former couple’s son, Knight.

A user with the handle @bacheorlyfe wrote under the photo, “One or two restaurants she would have been cool. You started doing too much and she da chef. You know you not supposed to live son!” The “Bye Baby” rapper responded to the comment with a “100” emoji. 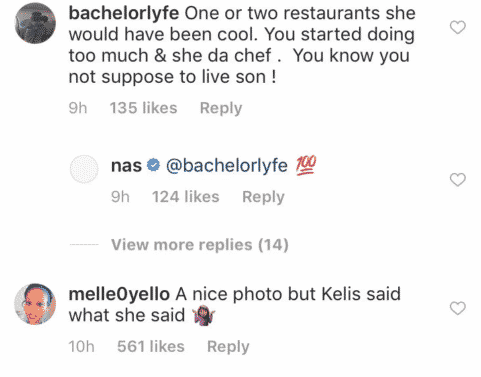 Another user wrote, “We need to build the black community, black women are used @ times by the femenist [sic] agenda targeting black men and white supremacy as well,” wrote willali6301. “And it’s not what she shows on social media, brothers and sisters, because truthfully it’s none of our business we are not judge and jury, but some play God, but let God Son raise his son in peace.” Nas commented “applause” under the statement. 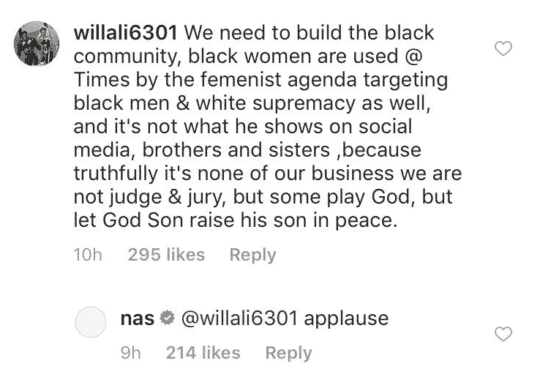 The rapper, without directly responding, seems to be aligning himself with comments that are defending him amid the claims made by Kelis. He reportedly has not replied to those more critical of the alleged abuse. After years of a public custody battle, Nas and Kelis have agreed to share joint custody of 8-year-old Knight.  There is no indication that Nas will make an official statement about the accusations made against him by his ex-wife.