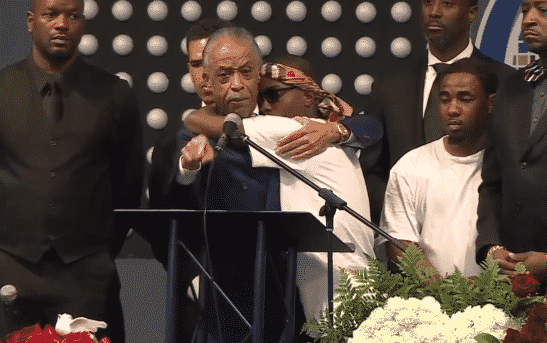 The funeral for Sacramento man Stephon Clark took place this morning, 11 days after the 22-year-old was met with 20 bullets from police who mistook his cell phone for a gun.

Just one day after White House Press Secretary Sarah Huckabee Sanders called the killing a ‘local matter,’ the Clark family laid their kin to rest. Rev. Al Sharpton flew in to give the eulogy, according to ABC 7.

“No, this is not a local matter,” Sharpton declared during the emotional service. “They’ve been killing young black men all over the country, and we are here to say that we’re going to stand with Stephon Clark and the leaders of this family. … This is about justice. This is about standing with people with courage.”

Family and friends of the slain father of two took their time sharing heartfelt moments and stories of the family man who was engaged to be married before his untimely death. Stephon’s brother, Stevante Clark, believes Stephon’s name should be remembered for years to come, saying, “Stephon is going to live on for generations, generations and generations.”

You can watch the full funeral below.