After tech executive turned feminist activist and author Sheryl Sandberg published her bestselling book Lean In: Women, Work and the Will to Lead, she quickly began to focus her conversations on our dire need for female leaders towards the socialization of young girls.  In fact, one of her major campaigns , #banbossy, was developed to help parents, teachers and others learn how to encourage girls to be assertive and “sit at the table” in order to become trailblazers, without using the kind of dispiriting language and actions that makes girls unsure of themselves as they grow into the kinds of women who lack the confidence they need to chase their dreams inside and outside of the workplace.

Or White girls, at least.

As the mother of a Black girl, who I am desperately trying to raise as proud and free in a world that seeks to snatch both pride and freedom from her, I want to, of course, teach my daughter to “lean in.” I want my daughter, and every Black girl, to stand tall and be their best selves.  But, there are moments, daily reminders in fact, when I remember that teaching her to assert herself in this world might mean compromising her dignity, her safety, or even her life.  It occurs to me– even as I read the story of six-year-old Madisyn Moore being handcuffed by a school security guard– that Black girls aren’t even allowed to have moments where they are uncooperative or unresponsive without being humiliated, assaulted, or worse by those charged with their protection and upliftment. 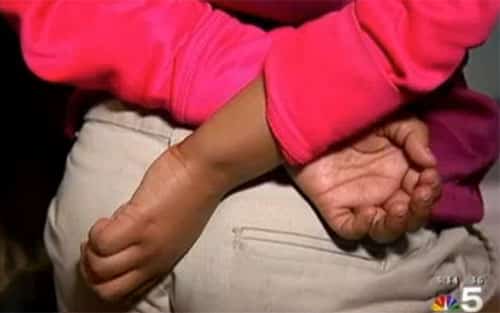 Madisyn demonstrates how she was cuffed for NBC-Chicago.

How can Black girls learn the kind of assertiveness that will make them future leaders, when they aren’t even allowed space to be human, when they are criminalized for simply having bad days?

Allegedly Madisyn Moore, a baby barely out of kindergarten, took something that didn’t belong to her. For this minor infraction, a school security guard (because, yes, security guards and police officers are often on staff at even elementary schools) decided he needed to teach Madisyn a lesson by accosting her and leading her out of her classroom embarrassed, in pain, and handcuffed.  Black girls like Madison learn at an early age that stepping out of line, which is often what “leaning in” requires, might lead to serious trouble.  Trouble that, if a Black girl is lucky, might only include suspension, or a lesson learned through the pain of handcuffs and a release to their parents.

It could always be worse, we know.

I consider the worst scenario while remembering the few seconds I was able to stomach watching the video of Senior Deputy Ben Fields as he put a Black female student into a chokehold and forcibly dragged her across her classroom in Richmond County, South Carolina.  Like Madisyn, that student was also handcuffed.  Like countless other Black girls, that student was criminalized for having a bad day and for, essentially, saying no.  Ben Fields, like so many who find themselves in positions of power over Black girls, believed the student he dragged had to be put in her place.  She had to be taught a lesson, like little Madisyn.

This nation, and the world, is hell-bent on teaching Black girls (and Black women) lessons on what happens when we get out of line.  Like when a fifteen-year-old Black girl was thrown through a restaurant window because she tried to help her friend who was being assaulted by police as they waited for the food they ordered.  Or when a bikini-clad Black girl was slammed to the ground and handcuffed in McKinney, Texas while in total fear for her life because she wasn’t “cooperating with officers.” Or when, more famously, we see Sandra Bland being assaulted, handcuffed and hauled off to jail by Brian Encinia for daring to assert her rights and ask questions about her arrest.

The good news is (because we need some good news, don’t we?), there is now a Congressional Caucus on Black Women and Girls.  U.S. Representative Robin Kelly (D-Ill.), while announcing the caucus argued that it’s time to give Black women a seat at the table to discuss the myriad of socioeconomic issues that affect their success.  Maybe now we’ll see a bridge built that forces the nation to contemplate and transform the harsh, cruel treatment of Black girls, so that they, too, can “lead in” and become the leaders and change agents so many are capable of becoming.

Josie Pickens is an educator, culture critic and griot.  Chat with her on twitter: @jonubian