She was an old Korean lady from a small village in Jeju Island, South Korea, with innocent, childlike tendencies—void of interracial friendships and eager to physically touch a Black man for the very first time. I was going through mixed-feelings in my first month in South Korea. It was 2010. The earthquake had devastated Haiti a few weeks prior, and I grew somewhat tired of explaining my hyphenated identity.

We arrived at the Fire Festival, an annual harvest celebration, and my foreign (and Korean) friends and I stood out like lost rock stars on an unknown tour. The Jeju locals gave us an undeserving celebrity treatment, pulling out multiple Samsung and LG cameras and cheesing from east to west. Some stood afar, afraid and indecisive. The old Korean lady gave a welcoming gesture, as she took a hesitant step toward me. Before I knew it, she immediately stroked my long dreadlocks, dived underneath my right arm, conjoined her Asian V-for-Victory sign with my peace sign for a close-up snapshot; and after the picture, she jumped up and down like a 5-year-old who had just discovered the meaning of life.

The video currently sits over 2 million Facebook views right now, and counting, with nearly 30,000 shares. It evokes a high, positive emotion–it’s quirky, contagious and quintessentially human. For some, it’s also a romanticized example of an ideal solidarity between the Black and Asian community in the United States, a bubbly juxtaposition of the historical plights–the hypervisibility of Blackness versus the invisible Asian. Muhammad Ali’s thoughts on the third-world liberation idea of the “Black Asiatic” also came to mind. But, in the comment section, there were still some reservations toward the video–many without proper context.

Most people simply couldn’t imagine having a random stranger running up to them for the first time, encroaching on their privacy and personal space. That’s understandable. In the expat community in Asia, however, we were already accustomed to the wide-spectrum of subtle/overt reactions toward foreignness—our westernized idea of personal space and universal social etiquette was constantly challenged and reimagined.

And for Black travelers, in particular, we’ve always been fully cognizant of the anti-Black sentiment that exists in varying degrees around the world. The never-ending attention can be exhausting. So it isn’t always great to be seen as an anomaly, a perpetual deviation from the norm—which made the old lady’s good intentions simultaneously admirable and problematic.

The ghost of imperialism still haunts our collective psyche: We do everything we can to avoid being dehumanized. But, in this case, it wasn’t problematic; I owned my agency, and the love was reciprocal. In an ironic twist, she actually ran the risk of seeming “uncivilized” to me, an American of African decent, who was privileged with having a breadth of cross-group experiences.

The quick, genuine embrace in that video goes even deeper.

It wasn’t enough to simply introduce myself as a Haitian-American from South Florida, because an arms-length approach would have only softened the barriers that exist in racially homogenous spaces. Hugs and high fives are necessary—it’s a universal form of language, we’re communicating the very connection that thought leaders around the world often advocate for.

At that very moment, I could also measure just how much everyone embodies the spirit of old people and curious babies, trying to avoid succumbing to unreasonable fears. But human touch is a universal language that isn’t spoken widely, which allows indifference and racial bias to fester like an incurable virus.

For a myriad of reasons, we see this lack of human connection in the United States, a country that prides itself as a “we all get along” country of immigrants. According to a Reuters study, an astounding 40% of white Americans have no friends of another race. A study in the Journal of Early Adolescence claims that as elementary and middle school students progress in school, interracial friendships decline significantly. Not good. The common individual can no longer deny the societal advantages of intergroup contact and a diverse social network, especially since “educators and scholars have argued that friendships across race have social, emotional, and academic benefits.”

Perhaps that is why people overwhelmingly admire this video. The average, good-hearted person is actually quite eager to connect with the “other.” He or she, in most cases, don’t know how to or have succumbed, to some extent, to their socially constructed fears.

Modernity is usually defined by its advancements in technology. A quick use of a smartphone immortalizes respect and love, which can be replayed over and over again. Modernity is defined by our social ability to advance our happiness and wellbeing. But it’s also defined by our willingness to be cooperative with the uncertainties that govern our bodies.

South Korea, like the United States, is a technologically advanced country, and does a lot of things better than other countries. It isn’t always the rural areas that suffer from a lack of cross-group exposure.

But the picture below shows a woman who is frightened by what she refuses to understand. There are definitely elements of this in the United States. Just take a snapshot of 2016’s political season so far. 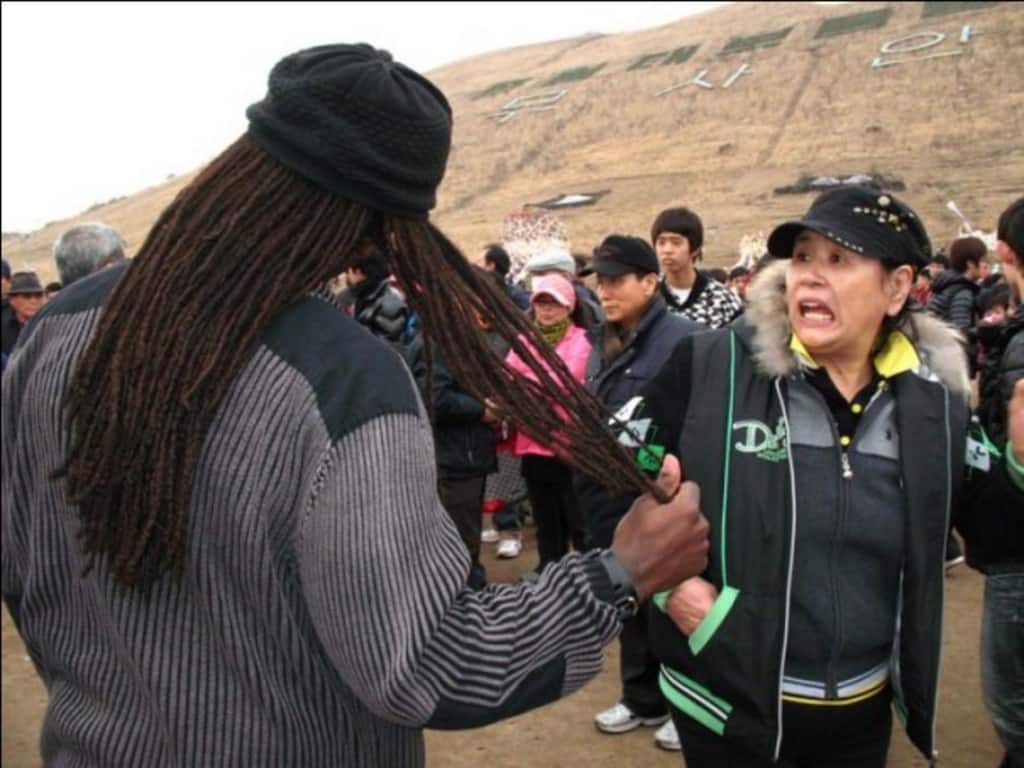 This image is in direct contrast to the video. We all risk looking like her if we continue to fail at challenging cultural discourse, informing the general public and finding beauty in our differences.

Republished with permission from OogeeWoogee.com.