A Call for Unity Among Two States of the Union
Advertisement 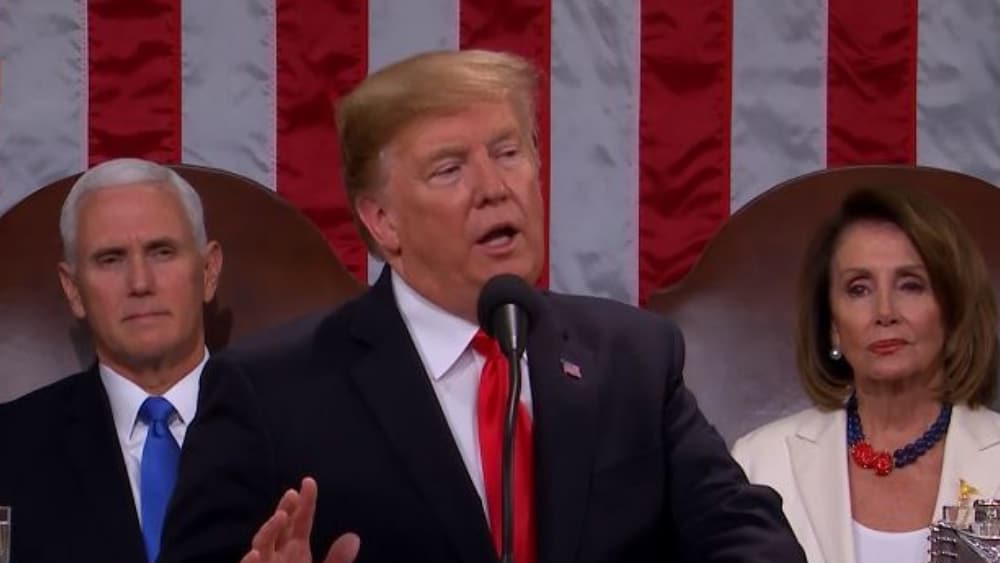 While Donald Trump’s State of the Union address on Tuesday focused, at times, on openness to compromise and national unity, it also highlighted his skillful use of polyvocal messaging.

Experts in immigration, sociology, politics and linguistics consider Trump’s show-and-tell style on border security and anti-Semitism, and avoidance of key issues such as climate control and budgeting, examples of Trump’s ability to talk to his base and appeal to pessimistic critics.

John Baugh, a sociolinguistics specialist and professor of at Washington University in St. Louis, noted that the State of the Union address is strategically written by a team of speechwriters and approved by the president. Baugh considers it important to keep in mind that every word serves a political purpose. “The speech contained two parts: One, that every patriotic American would approve of, and two, things that were overt messages to his base and coded messages to his base,” he explained.

Trump courted Americans beyond his base with calls for nationwide-paid family leave, lower drug prices, funding for childhood cancer research and a call to “defeat AIDS.” Alongside his appeals for highly favorable causes, Trump slipped in red meat for his base with items such as the end of late-term abortion, withdrawals from international treaties and a declaration against socialism.

Rep. Al Green (D-Texas) does not think Trump’s proposals are sincere, nor does the congressman see Trump delivering on his calls to action. Green is an African-American lawmaker who represents a district that includes Houston, home to a growing African immigrant population. “He has consistently proven to us that what he says too often does not align with what he does. He says he wants to eradicate HIV and increase funding for cancer research, but he cuts funding for health research in his previous budgets and eliminates certain protections for the LGBTQ community,” he said.

Treva Lindsey, Black Women’s History scholar, thinks the speech also served as a rallying cry around Trump and his values. “He’s trying to use unity, use bipartisan in ways that are of course misleading,” she said. “Suggesting that if you don’t get behind my vision of this then you are being divisive, as opposed to the policies that I’m talking about being divisive.”

At one point during the speech, Trump said, “If there is going to be peace and legislation, there cannot be war and investigation. It just doesn’t work that way.” Both Baugh and Lindsey consider this section of the speech to be an implied threat to Democrats.

Baugh also noted that there were many moments in the speech when Trump avoided issues such as budgeting, climate change and racism.

“He recognized African-American guests released from prison, but he has removed civil rights protections by the Department of Education, decreased Justice Department investigations into brutality allegations against police departments nationwide, and repeatedly espoused racism in his tweets,” Green said.

Kris Marsh, professor of sociology at the University of Maryland, focused on the president’s nonverbal cues. Marsh said Trump’s guest selection served as nods to his base. “You have two drug dealers up there that are Black. You’ve spoken directly to your base without speaking a word about it,” Marsh said. “In one breath, we want to celebrate these two getting out of jail, but to his base, it reinforces the notions of crime, drug dealers, the immigrants and these people of color without him having to say anything at all.”

Asad L. Asad, a sociologist specializing in immigration and incoming professor at Stanford University, also sees the examples of Alice Johnson, a woman convicted of drug trafficking, and Matthew Charles, the first person released through the First Step Act and a former crack cocaine dealer, as a part of a larger narrative.

After discussing the two guests, Asad said Trump immediately pivoted to “drug cartels from Mexico who are coming in and bringing all of these drugs with them.” According to Asad, “He’s saying look at these two people and their stories: ‘They’re victims basically of this drug war, where they were caught with these relatively low-level offenses and look, I saved them. And, now I want to save more people like them by regulating undocumented immigrants.’”

Some news outlets, such as the Grio, have pointed out a strategy to distinguish between U.S.-born Black Americans and their immigrant counterparts. Green, who represents Texas’ 9th congressional district, pushed back against Trump’s immigration rhetoric.  “Our diverse cultural histories and ethnic backgrounds make America the country we love. Being American does not mean you have to relinquish the richness of your culture. It means you get to hold true to the culture in which you were born and provide color to the ethnic fabric of our nation,” he said.

Asad thinks the selection of the Immigration and Customs Enforcement officer, who immigrated to the United States from the Dominican Republic through legal means, also served as a symbol of tokenism.

“There’s no such thing as a monolithic Hispanic or Latino experience. Different countries from Latin America have different relationships to immigration in the United States,” Asad said. “Dominican migration to the United States is a sort of different reality in that there have often been policies directed at promoting legal migration from the Dominican Republic.”

Red meat for the base

Another point of contention that served as an energizer for the base was the call to end late-term abortions. In this section of the speech, Trump said, “To defend the dignity of every person, I am asking the Congress to pass legislation to prohibit the late-term abortion of children who can feel pain in the mother’s womb.” Just before this statement, Trump made mention of Gov. Ralph Northam (D-Va.) without using his name as an example of Democrats who support late-term abortions.

Marsh considers Trump’s statements on abortion loaded, especially since he made a point to highlight lifting “nearly 5 million Americans” off food stamps, and did not elaborate on healthcare plans during the address. “You’re then not thinking about how they deserve health care,” Marsh said about the hypothetical unaborted children. “You want to protect them in the womb but the minute they come out you don’t want to continue protecting them.”

Also, family leave is an issue with bipartisan support, but the phrases to address the topic during the speech were alarming to Marsh, who reflected on the migrant family separation crisis. In the speech, Trump said, “I am also proud to be the first president to include in my budget a plan for nationwide paid family leave—so that every new parent has the chance to bond with their newborn child.”

Jessica A. Floyd is a candidate for her master’s degree at Medill-Northwestern University focusing on politics. You can follow her on Twitter @JessAFloyd.

In this article:Donald Trump, state of the union