This article is the first of a two-part series published in collaboration with The Chicago Reporter, a nonprofit investigative news organization focused on race, poverty and income inequality.

When Bill Lowry learned that 15-year-old Hadiya Pendleton had been shot to death near his home, he was working in his corner office at a law firm in Chicago’s financial district.

The high school honors student was caught in gang crossfire on Jan. 29, 2013 in a playground behind Lowry’s home. Pendleton had recently performed at a presidential inauguration event in Washington, D.C., celebrating Lowry’s friends—Barack and Michelle Obama.

Her death, steps from the Lowry family’s elegant two-story home – not far from the Obamas house – would have been unthinkable in Mayor Rahm Emanuel’s North Side neighborhood of Ravenswood. But it is not in Kenwood, a predominantly African-American community on the city’s South Side that is a stone’s throw from Lake Michigan.

Here, in this rapidly gentrifying neighborhood, well-off residents like Lowry, a managing shareholder at his law firm, live with the trappings of the haves and the have nots: take-out joints and tony sit-down restaurants, check cashing businesses and branches of major banks, public housing units and million-dollar homes. 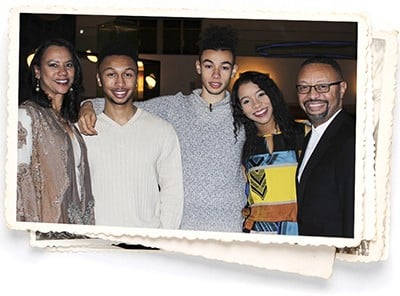 Lowry and his wife Cheryl, a dentist, could afford to live elsewhere in the Chicago area. They chose a double lot in North Kenwood, where they built a 4,600-square-foot home in 1999 and settled in to raise their three children. Their resources, like those of other middle-class families, can help improve the community.

While some middle-class African Americans like the Lowrys benefit from living in neighborhoods like Kenwood, with its tree-lined streets, striking architecture, short commute to downtown, less costly housing and a connection to the history and cultural legacy of the Great Migration, they also pay a price.  Their homes have less value than those in comparable white neighborhoods. They live in close proximity to poverty. They sometimes go home to gunfire.

Middle-class whites are more likely to reside in communities insulated from high concentrations of poverty, says Derek Hyra, associate professor and director of the Metropolitan Policy Center at American University.  “The Black middle-class is more vulnerable,” he said.

This is especially true in Chicago, one of the most racially segregated cities in the nation. Most Black Chicagoans live in a neighborhood that is more than 50 percent African-American, compared to 42 percent of Blacks in other metro areas, according to research by Mary Pattillo, professor of sociology and African-American Studies at Northwestern University.

The Kenwood community area is 68 percent African-American. One in three residents has an advanced degree, and one in six lives below the federal poverty line.

“The Black middle-class is more susceptible to feeling the impact of some of the legacy of violence that remains in [gentrified] communities,” said Hyra, who conducted research on urban renewal in the nearby neighborhoods of Douglas and Grand Boulevard.

When Pendleton was shot about 10 feet from the Lowrys’ property line, Bill Lowry’s commitment to the neighborhood was tested. 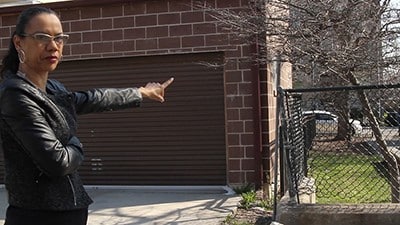 Cheryl Lowry points to the spot behind her house where Hadiya Pendleton was shot in 2013. Photo: Stacey Rupolo

His middle child, Evan, 17 at the time, asked him what he was going to do about the shooting.

The senior Lowry invited clergy, educators, former gang members and public officials, including Cook County Board President Toni Preckwinkle, to his house for a breakfast meeting to talk about possible solutions.

“It’s time for us to stop hiding behind our alarm systems and safety glass,” he recalls telling the group. “We need to step up and play a role in our community.”

Isaac Monroe, who lives two blocks from the Lowrys, had a similar moment when another teenager was fatally shot in the neighborhood nearly three years after Pendleton.

“Liked the area. Liked the transition that I saw. Liked the history. Liked being close to the lake. And I could just see the potential,” he said.

The 64-year-old legislative consultant saw another side of the neighborhood too. Drug dealers carried out transactions from two abandoned cars on the vacant lot next door “like it was an open-air vegetable market,” he said.

Even so, he was optimistic. He liked his neighbors. He had never been personally touched by crime.

“We always boasted that we never had anything happen on our little block here,” he said.

That changed on Sept. 19 of last year.  Monroe was attending his next-door neighbor’s birthday party when the early evening tranquility was shattered by gunfire.  The party guests, gathered in the dining room, hit the floor. When they finally went outside they saw two teenagers lying on Monroe’s lawn. The teens had run through his open gate to escape the gunfire.

“One kid was shot and he was trying to get up and a couple of friends were trying to help him,” Monroe recalled. “A couple feet over another kid was lying face down.”

Tyjuan Poindexter, 14, had been shot in the head. Gang members had mistaken him and his friends for a group of boys they had fought with earlier in the day. He died in Monroe’s backyard.  His body rested there for five hours as police investigated the shooting. The sight of the boy’s lifeless body and the sounds of his sobbing mother are seared into his memory, Monroe said.

“To hear a mother wailing for five hours knowing that her son is lying just a few feet away,” said Monroe, his voice choking and then trailing off. “I can still hear the wailing.”

Days later, still in shock, he tried to hose down a patch of grass where Poindexter had collapsed. But the congealed blood and brain tissue would not wash away.

“I have gotten a heightened sense of awareness (about crime),” Monroe said, “but I’m still determined I’m not going to live in fear.”

Pattillo, who has conducted research on Black gentrification and public housing transformation in North Kenwood and neighboring Oakland, said many of the residents she interviewed were attracted to the area’s history and revitalization.

In two waves of migration between 1910 and 1970, countless African Americans headed to Chicago’s Black Belt, trekking from the rural South to the North in search of jobs and a better way of life.

During its glory days, the area around 43rd and 47th streets was a lively cultural scene. Jazz and blues notables such as Louis Armstrong, Nat "King" Cole and Muddy Waters lived in the area at one time or the other. Muhammad Ali once owned a home in Kenwood near the imposing residence of the late Nation of Islam leader Elijah Muhammad.

Today, almost 18,000 people reside within the one-square-mile that makes up the Kenwood community area, which stretches from 43rd to 51st streets between Cottage Grove Avenue and the lake.

The area’s history isn’t its only appeal, Pattillo, author of the book "Black Picket Fences: Privilege and Peril Among the Black Middle Class," said. “Many people also saw it as an excellent financial deal.”

Historically, urban segregation has not been a matter of choice for Blacks. Decades of policies and practices – blockbusting, racially restrictive covenants, racial steering by real estate agents and redlining by banks and other lenders – limited Blacks’ housing choices and destabilized neighborhoods.

The continuing segregation of predominantly African American community areas in Chicago led to concentrated pockets of poverty, where over 40 percent of the residents live below the federal poverty level.

Brown says she understands why middle-income Blacks choose neighborhoods where other African American live. It’s more comfortable living in a community where “lots of people look like you.” But she said the decision to buy a home in a Black neighborhood carries financial risks. Property values are lower in areas where the population is more than 10 percent African American, she said.  That’s true whether the homes are owned by Blacks or whites in those neighborhoods.

Some African American families with means debate the idea of moving to communities that are less Black and less economically mixed in an effort to build wealth and protect their housing investment.

In 2013, the wealth of white households was 13 times the median wealth of Black households.

A residence, however, means more than just dollars and cents.

“There’s no right or wrong answer about whether people should or should not stay,” said Pattillo, who is African American and lives in North Kenwood. “It’s tied to very thorny, personal questions about integration versus segregation, and self-help versus policy changes, and notions of racial uplift. I don’t think there’s a right answer.”

Pendleton’s murder didn’t change the way she felt about the neighborhood.

“We built this home, and I’m not one to run. That’s what it would feel like, like someone was pushing us out of our home,” she said. “We want to try to change what’s going on and help some of these kids.”

Deborah L. Shelton is Managing Editor of The Chicago Reporter and is a resident of North Kenwood, where she has lived for 8 years.