Last year marked the 60th anniversary of Emmett Till’s brutal murder, and a marker sits at the site where his body was found, tortured to death. But the condition of the marker is almost as angering as the killing.

The 14-year-old Chicago native had been visiting relatives in Mississippi when he was killed because someone said he whistled at a white woman in the small town of Money.

Till’s body was recovered three days later. He was found with a cotton gin fan tied around his neck with barbed wire. His left eye and most of his teeth were also missing and his nose was crushed, along with a bullet hole to his right temple. JET ran the gruesome photos of Till”s body in its Sept. 15, 1955 issue.

The murderers were set free by an all-white jury and confessed to the crime in a 1956 interview with  Look magazine. “I didn’t intend to kill the n****r when we went and got him – just whip him and chase him back up yonder,” one of the killers, J.W. Milam said when he and cohort Roy Bryant spoke out.

What’s just as disturbing as the harsh, brutal and devastating murder of a child at the hands of men full of hate is the reality that the memorial that marked the place where Till’s body was found now looks like this:

A Facebook user took a photo of the site where Emmett Till’s body was found. The marker is covered in bullet holes. https://t.co/InIhSywkDWpic.twitter.com/QyVrKKInug

On the other hand, the marker for the home of Milam is almost perfectly intact: 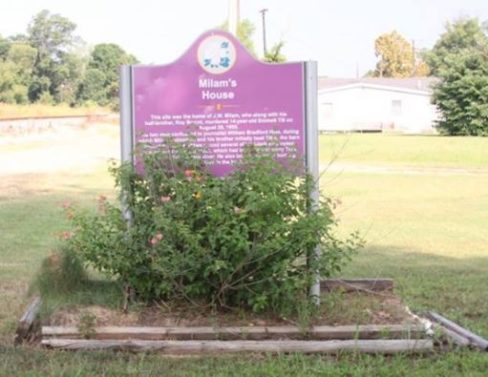 The signs were installed in 2007 and according to Slate.com, have been vandalized ever since. One of the signs, located on U.S. Highway 49 was stolen. Another in Tallahatchie County was damaged a year later. That same year, the original sign placed where Till’s body was discovered was ripped down by vandals, officials say.

At the time of incident, Board of Supervisors President Jerome G. Little expressed commitment to preserving the signs.

“We’re not going to tolerate them tearing down anything that’s marking Emmett Till’s murder,” Little said. “I want to send a message: Every time they take it down, we’re going to put it back up.”

The sign was replaced but in 2013, it was shot up. And it has remained in that condition ever since.

Viewers of the sign say at least 30 bullet holes rest in its structure.

“It shows that there’s still people who do not want to remember or talk about Emmett Till,” Patrick Weems, a project coordinator for the Emmett Till Memorial Commission, told the New York Daily News.

To me it shows a little more than that. Hopefully the post-racial society advocates take note.

Weems said the struggling organization can’t afford to routinely replace the signs. Instead it has been forced to launch a virtual tour of sites commemorating Till’s death, called the Emmett Till Memory Project.

Currently, the  Emmett Till Interpretive Center is raising money to fund the project and to replace the bullet-riddled sign.

Afraid to live in a world where the marking for a man who committed one of America’s most brutal and horrific crimes is adorned with flowers and admiration.

I’m afraid to live in a world where an innocent, Black boy can be terrorized, brutalized and horrifically murdered, with his mother making the difficult decision to place his body on display for the world to see was necessary for our quest for justice and equality.

For those who are convinced that we live in a post-racial society, take a hard look at the world we are living in. Those rose-colored lenses will only allow you to “see” so much.

At Least 30 Wounded, 6 Killed at Chicago Fourth of July Parade