End of the Amen Corner: It Will Take More Than Prayer to End Mass Shootings

The front page of the New York Daily News said it all: “God Isn’t Fixing This.” 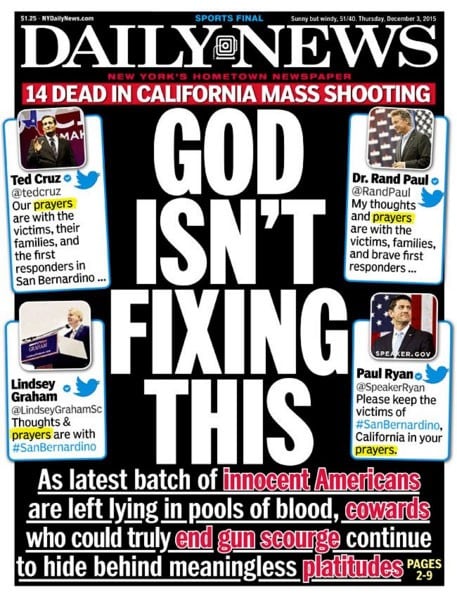 And they certainly haven’t fixed it on the South Side of Chicago. Or in Detroit. Or Cleveland. Or Baltimore. And now we can add San Bernardino, California, to that lengthy list.

The coming days and weeks will reveal the story, but so far not much is known. According to reports, two suspects—identified as Syed Farook, 28, and Tashfeen Malik, 27—went on a gun rampage at a social services facility, killing 14 and wounding 21 others. They were killed four hours later in shootout with police on a residential street about two miles away. No motive has been established yet, but authorities are speculating anything from a disgruntled worker situation to terrorism.

Clearly, the two — who a family member told the Los Angeles Times were married — dressed in military fatigues and body armor and intended to engage in some type of battle.

So now the television pundits will spend hour upon hour saying the same things they always say: “Gun violence is bad, m’kay?” Liberals will call for removal of all guns from every corner of society. Conservatives, noting Farook was a devout Muslim, will call for ridding the nation of any follower of Islam. Neither is likely to happen.

It’s a very predictable formula that happens every time we have a mass killing in this country. But what never happens is the enactment of actual, tangible solutions. What never happens is real analysis of what law enforcement is missing or the resources required when it comes to preventing mass shootings. What never happens is discussion on limiting gun access to only those who pass qualification standards—you know, the same way we have to in order to drive a car.

Whether the shooters were angry about a workplace situation or plotting a Paris-style massacre in the name of ISIS, it should have been very hard if not impossible for them to get their hands on that kind of firepower. It’s doubtful these were gun enthusiasts who owned AR-15s for sport shooting.

So at what point do politicians who are terrified of the NRA actually begin to create meaningful firearms policy in this country? At what point do they even enforce existing federal gun laws?

The only thing that might get this country serious about effective gun policy is if every Black man in America legally obtained firearms and carried them openly. History has already proven that will light a fire under political butts.

In 1967, then-California governor Ronald Reagan didn’t hesitate to sign the Mulford Act into law after Huey Newton and the Black Panthers marched up the state capital steps—weapons in hand—in protest of that very bill, which banned public carrying of loaded firearms. Ironically, the bill enjoyed the full support of the NRA.

Before everyone goes nuts, I’m not saying that every Black man should go out and buy a gun. I am saying that the only thing that seems to get this country to act is when it thinks Black men are becoming too dangerous for Main Street. (It never thinks about MLK Boulevard.)

Let’s be blunt: mass shootings, be they on the streets of Urban America, in schools and campuses, in workplaces, or in churches, are currently commonplace in this country. It’s now normal for this type of thing to happen. You can pretty much expect something like this to happen at least once every few weeks.

While people bark at each other over the Second Amendment, mothers, fathers and children lose their lives. On the other end, there’s someone who is angry enough, selfish enough and thoughtless enough to carry out another killing. If there were effective measures taken by people who could prevent mass shootings before they were ever more than an evil idea, it wouldn’t have to be this way.

That’s one way politicians can answer their own prayers.