Harlem’s rich history is overflowing with an abundance of of jazz and art, but tucked away down West 124th Street, right across the street from Marcus Garvey Park, is a quiet, hidden gem. Inside a small, brick building, you’ll find one of the last remaining orders of Black nuns left in the country, who happen to also be celebrating their centennial anniversary today.

The Franciscan Handmaids of the Most Pure Heart of Mary have resided in their convent since 1923. The order was founded in segregated Savannah, Georgia in 1916 in response to a proposed law that would have prevented White nuns from teaching Black children.

Since their move up North, the Franciscan Handmaids became a major center for Catholicism in Harlem. The nuns operate the St. Benedict Day Nursery, located in the building connected to their convent and the St. Edward Food Pantry in Staten Island, which serves more than 20,000 families each year. Despite their continued good acts, the Franciscan Handmaids have been battling with dwindling numbers in an ever aging order.

“Our community has been in New York since 1923 and the last New Yorker who entered our order was 60 years ago,” says Congregation Minister Sister Gertrude Lilly Ihenacho, who is originally from Nigeria. 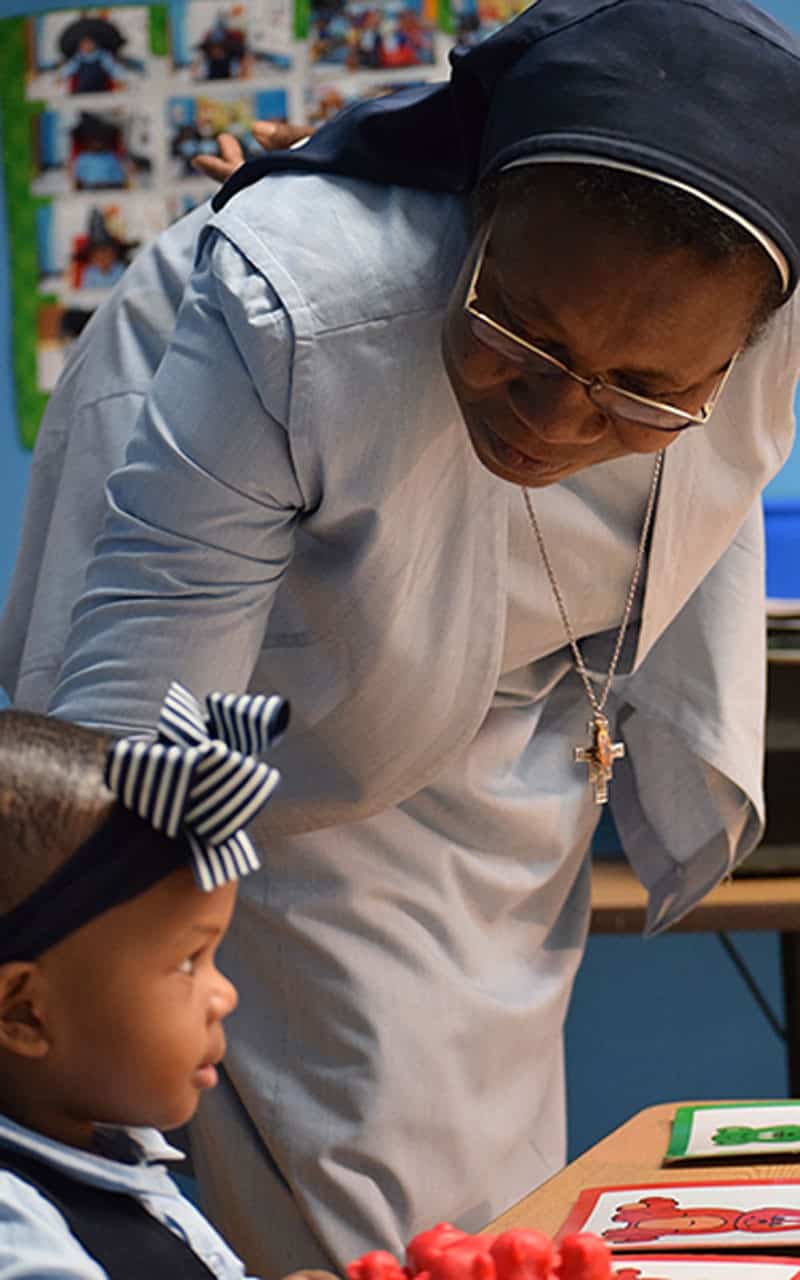 In 2016, women are choosing not to join the convent, creating a constant issue within any aging order. According to a 2014 study titled “Population Trends Among Religious Institutes of Women,” conducted by Mary L. Gautier and Mark M. Gray at Georgetown University’s Center for Applied Research in the Apostolate, there has been a 73 percent drop in membership, from its peak of over 181,000 sisters in 1965 to less than 50,000 in 2015.

To continue serving the community in Harlem, Staten Island, and Yonkers, Sister Gertrude sought to invite new sisters into the order from beyond the New York. area.

“We created a website and email. We started accepting applications from the Caribbean and Africa including Nigeria and Guyana,” Sister Gertrude explained. “Our sisters come from the Virgin Islands, Camden, NJ, North Carolina, and there are those from the Bahamas, St. Croix, Puerto Rico, and other islands.”

Since opening the lines of digital communication, the sisters have welcomed four new women into the order, all of whom are Nigerian.

“We said either we close now or we listen to the word of God and open our mission,” explained Sister Gertrude.

Though the numbers of newly added nuns are small, Sister Gertrude is hopeful that more women from across the world will continue to reach out in an effort to join the order. Currently, with only 14 sisters available, their lists of responsibilities are mounted high.

Walking through halls of the four-story convent, you know there is a lot to do. And yet, within the quiet serenity, there is a sense of gladness and satisfaction that radiates from the sisters living and worshipping there.

“We joyously take a moment to reflect on our 100 years of providing vital assistance to the community, but it’s amid a renewed calling to revitalize our purpose and expand our mission of service for the next 100 years,” said Sister Gertrude.

Coinciding with their anniversary, the sisters launched “100 Days of Kindness” a campaign which runs from January 6 to April 14 and corresponds with the arrival of the Magi who brought gifts to celebrate the birth of the Christ child. The nuns are asking New Yorkers to perform one daily, random act of kindness with the purpose of enriching the life of another human being.

The Franciscan Handmaids official centennial celebration will be held at the New York Academy of Medicine Conference Center in East Harlem on Tuesday. Proceeds from the gala will go towards scholarships for needy children to attend and revitalize the St. Benedict Day Nursery.