How the Racial Differences in Prison Deaths Illustrate Inmate Afflictions

New data released last month from the Bureau of Justice Statistics shows a stark difference in how White and Black inmates are dying in the nation’s prisons and jails.

Deaths of all prisoners rose slightly from 2013 to 2014, the latest year for which the bureau has compiled data. Of the 4,980 people who died in custody of federal and state prison systems and about 2,900 local jails nationwide, most were non-Hispanic Whites.

Illness accounted for a vast majority of the deaths — heart disease and cancer were among the most common causes — but a closer examination shows significant racial differences in two causes of death.

Between 2001 and 2014, the percentage of state and federal prisoners who died from AIDS-related illnesses decreased dramatically, from a high of 9.6 percent down to 1.8 percent. Local jails saw a similar drop. At the same time, the number of prisoners living with HIV, the virus that causes AIDS, also decreased. 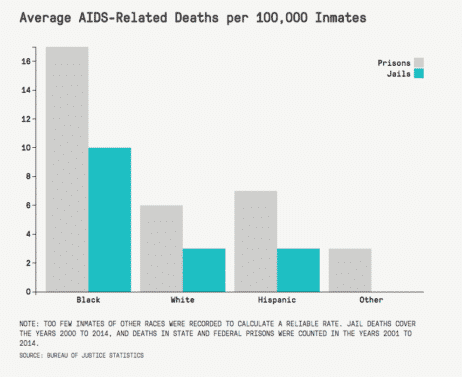 Despite the decrease, the rate of AIDS-related deaths differed significantly between White and Black people in prisons. White inmates died of AIDS-related illnesses at an average rate of 6 per 100,000 prisoners each year. The rate for Black inmates was 17 per 100,000, nearly three times that of Whites. In jails, a similar pattern emerged. Hispanic and Latino prisoners had roughly the same mortality rate as Whites in prisons and jails.

There are similar disparities for suicide, which overall has increased slightly in prisons since 2001. It is the cause of death for 7 percent of White prison inmates, compared with only 3.5 percent of their Black peers.

In 2014 alone, suicides represented 7 percent of all deaths in state and federal prisons — the highest percentage since 2001.

This mirrors the overall increase of suicide among White men between the ages of 45 and 64 in the general population, according to the Centers for Disease Control and Prevention. But it is also reflective of the problem with mental health treatment in jails and prisons. Michele Deitch, a senior lecturer at the School of Law at the University of Texas at Austin, says there are ways to prevent suicide among the incarcerated.

“Look at facilities that have been sued,” Deitch said. Afterward, “they tend to implement good prevention strategies,” she said.

For people who are already living with mental health challenges, the loss of a family member, a stint in solitary, being the victim of violence or being denied parole can lead to a state of depression, said Deitch, who urged better staff training in all areas of corrections. 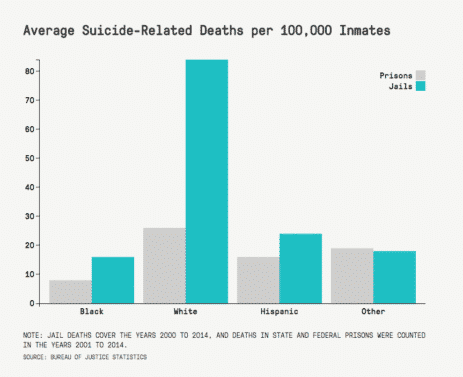 The jail suicide of Sandra Bland in Texas in the summer of 2015 brought national attention to the problem and led to some changes. The new federal data released, however, covers only through the end of 2014 and would not reflect any shifts since Bland’s death.

Although more than one-fifth of suicides in local jails happened in segregation, nearly half occurred among inmates housed in the general population.

This article originally appeared at TheMarshallProject.org.