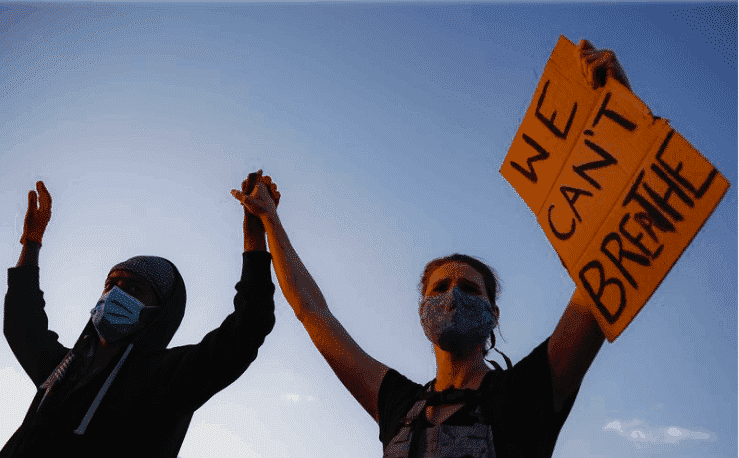 Protestors demonstrate on University Avenue while holding a "WE CAN'T BREATHE" sign and wearing protective masks, Thursday, May 28, 2020, in St. Paul, Minn. Protests over the death of George Floyd, a black man who died in police custody Monday, broke out in Minneapolis for a third straight night. (John Minchillo/AP)

This is an OP-ED

I am a proud American, and I am having trouble breathing in the country I love.

Even though the Declaration of Independence stated that Americans have the unalienable rights to life, liberty and the pursuit of happiness, these are realities for some yet remain out of reach for far too many.

As the father of two black teenage boys, I had “the talk” with my oldest son, prompted after I was pulled over for allegedly turning without signaling. Many black parents have accepted the necessity of warning their kids about driving while black, and what to do in the event they are stopped. It is a dreaded ritual for us — it’s so difficult to explain to our children the danger they may face when venturing out beyond our reach.

But I never expected that my son, a runner, would ask if it was safe to jog while black.

Sadly, Ahmaud Arbery’s murder isn’t shocking. Neither is the failure of Georgia’s criminal justice system to respond until after a video emerged publicly. In the case of George Floyd, fortunately, his brutal killing by Minneapolis police officers was captured on tape, too. Also appalling was the Central Park encounter of Christian Cooper, a bird watcher who experienced an indignant dog walker, Amy Cooper, who engaged in weaponizing the color of his skin with a quick call to 911. That was a chilling reminder of the jeopardy that black men face every day. However, the New York City police department has yet to charge her for making a false report.

In a move we rarely see as a response, her previous employer, Franklin Templeton, an investment firm that manages millions for Connecticut’s pension funds under my purview, took swift and transparent action in her firing. They wrote to me and shared: “Franklin Templeton does not tolerate racism of any kind.”

Government has failed. Law enforcement has failed. Social and financial institutions have failed. In a nation with such powerful ideals and global leadership in human rights and innovation, this persistent systemic failure should be unacceptable. If we want to see change, it is incumbent upon us all to recognize the killing of unarmed black people as the existential crisis that it is.

While no one action will solve the racial problems America faces, this much is certain: We cannot continue doing the same things and expect different results. It is time for the wealthy and privileged to start pulling the levers of power they hold. Wall Street and corporate America, I’m speaking to you.

There is precedent for corporate America playing a constructive role in advancing social change. Its economic boycott efforts helped to end apartheid in South Africa, and more recently, helped to stop North Carolina’s so-called “Bathroom Bill” from discriminating against members of the LGBTQ community. Just imagine if the NBA, NCAA, NFL, Jet Blue and Delta took similar stands in states with poor records on criminal justice. Corporate America can and should act as if racial injustice is bad for business — because it is.

Our justice system offers inconsistent protections, and the murders of unarmed black Americans are rampant. Between 2013 and 2019, there were 204 unarmed black men in the United States who were shot and killed by police who were on-duty, and in 188 of these incidents, there were no known criminal charges filed against the officer. And let’s face it: we know a lot more about these incidents because of these videos.

I should also note that, as someone who was grateful to work with police and a prosecutor to bring the killer of my cousin to justice, I know there are good people in law enforcement who honor their oath to protect and serve.

When I was growing up, my parents would take us on summer trips to Georgia, their home state. I recall one time when we stopped at a motel to rent a room to freshen up after having been on the road all day. The parking lot was empty, and yet still, the motel manager looked at us and said, “We’re all filled up right now.” There wasn’t a car in sight.

As a family, we talked about it, understood it for the racial discrimination that it was, and we kept going. Black Americans still experience hard moments like this, daily. The truth is, if we display our anger and hurt externally, it rarely ends well. And if we internalize it constantly, it’s hard to function. It’s for that reason that we keep moving; it’s how we have learned to survive.

America has been on a painfully slow and zigzagging march towards racial equality, but leadership matters. Our current president does nothing but exacerbate tensions to fuel hate, and as a country, we are still uncomfortable with discussing, let alone addressing, the deeply harmful impacts of racism. It’s seen in the economic, health, education and criminal justice disparities we see every day but largely ignore.

With COVID-19, black men are now expected to wear masks to protect themselves and others, but even without masks, we are criminalized while walking, jogging, driving and just being. As a state treasurer overseeing more than $60 billion, I am well aware of the power of capital in America. So, to Wall Street and businesses across America, hear us: We want to live, and we need you to get off the sidelines. Joining with advocates, you have the power and the resources to change the trajectory of this country.

We cannot delay any longer. I just want our sons to grow up in an America where they can breathe and pursue their dreams.

This originally appeared in the Hartford Courant.