Beauty and the Bleach: This Issue is More than Skin Deep

Over the past few years, social media has been abuzz with discussions of skin bleaching. In recent weeks, we’ve lamented Lil Kim’s ghostly shadow of her former self, ridiculed Ghanaian boxer Bukom Banku for denouncing his black skin, and dragged Azaelia Banks for becoming a virtual spokesmodel for Whitenicious by Dencia. While we talk amongst ourselves, a segment of a 2012 video investigating “unusual beauty trends” in Jamaica has resurfaced on Facebook. Viewed over two million times in less than one week, in that segment we see a soft-spoken blonde-haired European reporter “in the trenches” as she talks to a number of Jamaicans about their bleaching and offers requisite warnings about the dangers of the practice.

Whether from the perspectives of Black folks or from those of Whites, our communal voyeurism into skin bleaching tends to focus almost solely on the individuals who bleach their skin, and not the global institutions that make skin bleaching a viable option. And it’s a problem.

More often than not, whenever we catch wind that someone is bleaching or has bleached his/her skin, we jump directly into a predictable practice of backyard psychology. While it is likely, and many times admitted by said person, that their self-esteem has been compromised by any number of mitigating circumstances, how is it that we, the laypeople at our keyboards, feel so comfortable “diagnosing” everyone who bleaches her/his skin with “self-hate?” And more importantly, how does this “self-hate diagnosis” move us closer to adequately eradicating the practice? That is our goal, right?

As a researcher who studies skin bleaching, and has actually spoken at length with women and men who bleach their skin, I am deeply troubled by our response to the practice:

I feel sorry for them.

These people are sick.

People just need to love themselves.

I’m not sure what it is that we don’t understand.

As we sit on our social media pedestals, we behave as if we are somehow different, if not better than people who bleach. Again, we focus our attention on them as individuals, and not as inhabitants of a global society that reifies skin color as a determinant of life chances and social relations—a society that we ourselves also happen to inhabit. Our public response to skin bleaching (not to be confused with our public policies around skin bleaching), suggests that somehow “those people” who bleach their skin ought to “know better.”

In speaking with skin bleachers in Ghana, a number of them reported that part of what makes light skin so appealing is its presumed connectedness to Whiteness. The idea that in a society where the large majority of people are relatively dark-skinned, to have light skin means that you may have White (or other) ancestry. And if in this context, Whiteness has been historically projected as inherently better than Blackness, to have White blood automatically renders one better than average. The value bestowed light skin in its presumed connection to Whiteness reflects the extent to which the entire society continues to privilege Whiteness. So if there is such a thing as “self-hate,” our entire society undoubtedly engenders it. We have to stop treating skin bleachers as if they exist in a vacuum. They do not. 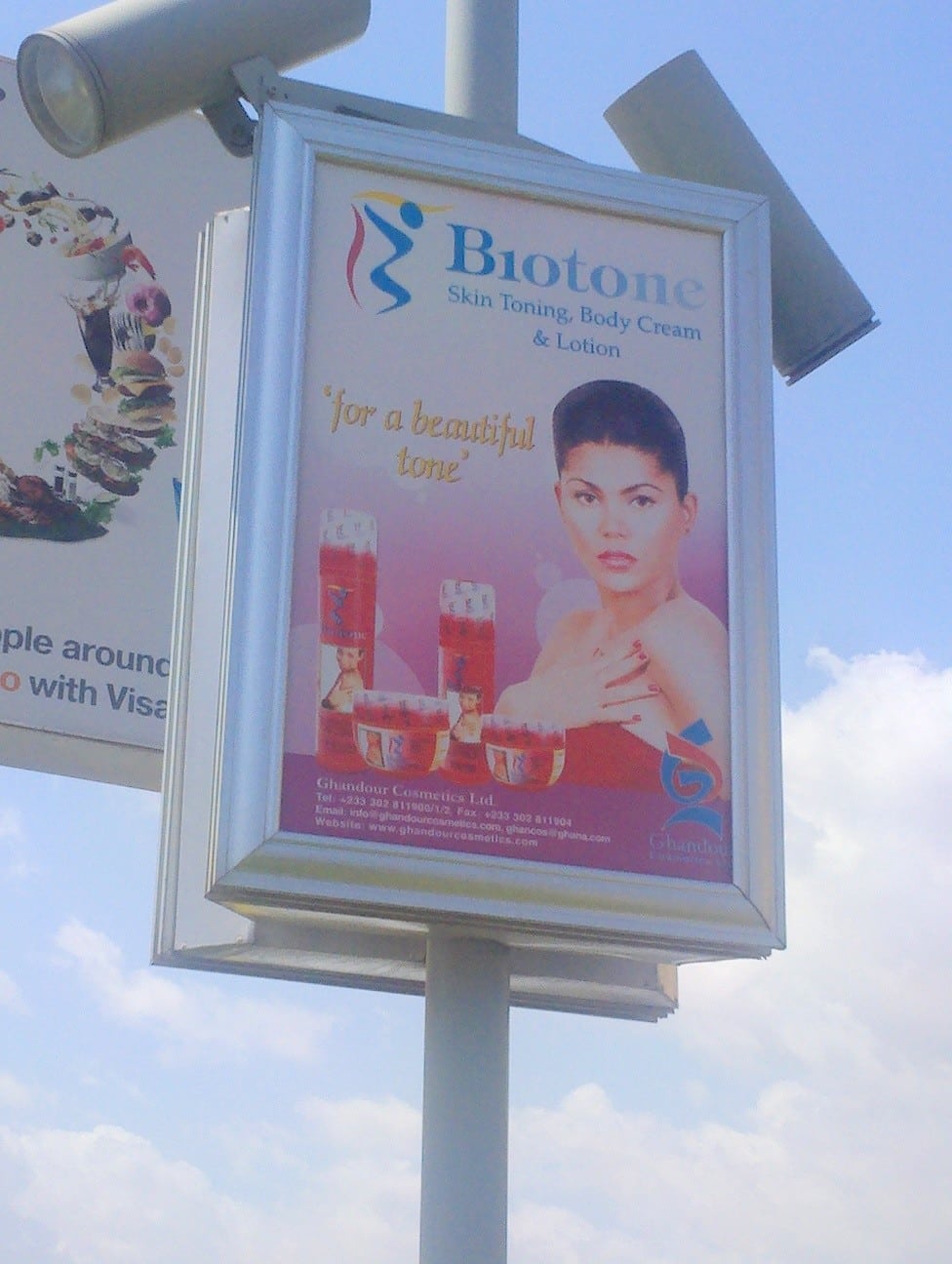 Now of course, with our skin color being the immutable mark of our Blackness, skin bleaching stands as the most egregious attack on our identity, the most literal champion of White Supremacy. Yet, we are fighting the individuals—people who bleach—and not the institutions—the people who make the products. Most of these skin bleaching products are manufactured in Europe where the active ingredients have been banned–banned from use, not manufacture. It seems then that the Diaspora has become a literal dumping ground for chemicals deemed unfit for White bodies. Although Ghana recently announced its ban on particular bleaching products (those containing hydroquinone), enforcement is not only highly unlikely, but low priority. The Ghana Food and Drug Board already banned the import, distribution, and use of products containing hydroquinone in excess of 2% concentrations in 1995, and later reviewed the prohibition to 0% in 2005 – if there was indeed a ban then, there would be no need to announce another ban now. (Note – hydroquinone in concentrations above 4% is banned in the United States. Take a trip to your local beauty supply store and you will likely find a number of products containing upwards of 20% hydroquinone. Unenforceable in the United States, unenforceable in the Diaspora.)

While we’re passing judgment, and ridiculing people of color (namely Black people) as “brainwashed” for thinking that lighter skin is more appealing, we conveniently ignore the fact that the streets of many West African cities are decorated with 60ft billboards for skin bleaching products, that magazines marketed to women of color all over the world, especially in Asia, feature pages and pages of advertisements for skin lighteners (or to use the more socially acceptable language, “fade creams”), or that many Black male celebrities (many of whom are themselves dark-skinned) often make very public statements (and write very noxious lyrics) about their “preference” for lighter-skinned women and/or their disdain for darker-skinned ones. Instead of asking women why they bleach, why aren’t we asking men why they “prefer” light skinned women? There’s a fine line between “preference” and pathology. Where is our discussion of the “self-hatred” of these men? Men who reject women who likely look a lot like the women in their families, the women who gave birth to them.

Ironically enough, when our analysis of skin bleaching hits our interwebs and our press, oftentimes it is featured on sites that continue to project consistent images of presumed Black beauty as light-skinned, if not, racially ambiguous. Where is our discussion of the “self-hate” of Black media sources? If they are in a position to diagnose self-hate, then they should know that their continued projection of dominant imagery affects the consciousness of their readers, no?

In 2016, what are the parameters of Black self-hate and how is it measured? Is practicing Christianity, a religion that was used to justify the enslavement and colonization of our ancestors, a reflection of self-hate? Or is sending our children to predominately White schools, spaces where they are often one of few Black children, a form of self-hate? What about Predominately White Colleges and Universities (PWCUs)? Or living in all-white cul-de-sacs? Self-hate?

And then there are chemical hair relaxers, products that include ingredients similar if not identical to the ingredients in many skin bleaching agents, products that are placed on our scalps, underneath which lie our brains. Dare I even mention the vast array of “exotic” and very expensive hair extensions – Brazilian, Malaysian, Peruvian, etc. Where is the discussion of self-hate now? What is our investment in supporting one aspect of a White aesthetic for Black women, yet completely rebuking another? Could it be that we continue to seek social acceptance based upon what it means to look “civilized” in the eyes of the rest of the “civilized” world? (Respectability, anyone?) Could be, but if you understand my point, then you can begin to understand the complexities of the skin bleaching phenomenon, and thus the limitations of the “self-hate” diagnosis. If skin bleachers suffer from self-hatred, then in some ways, so too do we all.

There are levels to this.

Yaba Blay is the Dan Blue Endowed Chair in Political Science at North Carolina Central University. She is the creator of the #PrettyPeriod movement and the author of (1)ne Drop: Shifting the Lens on Race. Her research focuses on skin bleaching, colorism, and the politics of Black beauty. For more about her work, visit yabablay.com.