Nicki Minaj doesn’t have any beef with Bronx rapper Cardi B, but that doesn’t mean the former reality star hasn’t offended the “Monster” MC since her time in the spotlight began. In a new interview with Zane Lowe, Minaj dishes on incarcerated ex Meek Mill, label mate Drake and “Motorsport” collaborator Cardi B, whom she feels didn’t show the proper respects when asked about the 2017 anthem. 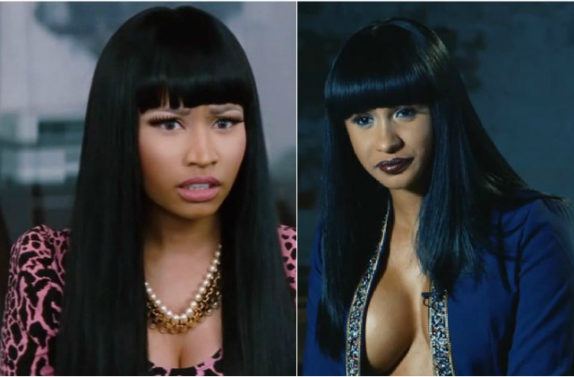 “I remember when I first came in the game… I would only be singing their praises and saying thank you,” Nicki said of the female rappers who came before her. “The first interview she did, it just hurt me because she looked so aggravated and angry. She just kept saying she didn’t hear it…. I was like, What?”

Minaj is referring to Cardi’s Capital Xtra interview where she claimed Minaj re-wrote her verse once she realized they’d be sharing the track, insinuating that the Barbie was intimidated by the “Bodak Yellow” spitter.

#PressPlay: #CardiB addresses how she became a part of #Motorsport featuring #NickiMinaj and #Migos. She says that when she first heard the track, Nicki’s verse was different than the version we hear today. Via: @capitalxtra

When it comes to the music video for “Motorsport” and why they filmed their verses separately, Minaj says they both had a scheduling conflict because they share the same hair stylist. She took offense to the fact that no one, including the three members of Migos, came to her defense while she was made to look like “the bad guy.”

“And you still did interviews just to paint Nicki as the bad person. And play the victim. And that really, really hurt me because I really fully supported her [Cardi B]. And up until this recent interview she did [with Ebro Darden for Beats 1], I had never seen her show love in an interview. And I can only imagine how many girls wished they could’ve been on a song with Nicki Minaj.”

It seems things have come full circle for Onika, as she was accused of refusing to pay homage to Lil Kim upon her entry into the game.