If you’ve taken the Oscars off your radar this year due to the #OscarsSoWhite controversy, there are a few ceremonies that will highlight the diverse talent the Academy won’t.

Black&Sexy TV is hosting Battle of the G.O.A.T.’s aka the Greatest of All Times Debates, an event where the crew will gather to debate about some of best in Black film.

From vintage Black cinema to the great romance films of the 90’s, movie lovers will wrangle it out with exciting categories including Love Jones vs Love and Basketball, Greatest of All Time Denzel Performance and Coming to America vs Boomerang. Man, it’s bound to get heated!

Catch the live broadcast on YouTube, Facebook and Periscope Feb. 28 at 6 pm PST – the same night as the Academy Awards. But before the party officially begins, watch at least Chris Rock’s opening monologue along with the Black&Sexy TV family.

The Webisode allstars aren’t the only ones with something good going on. Russell Simmons’ All Def Digital also is throwing a celebration. The company will be paying tribute to Will Smith and Norman Lear at the first-ever All Def Movie Awards. 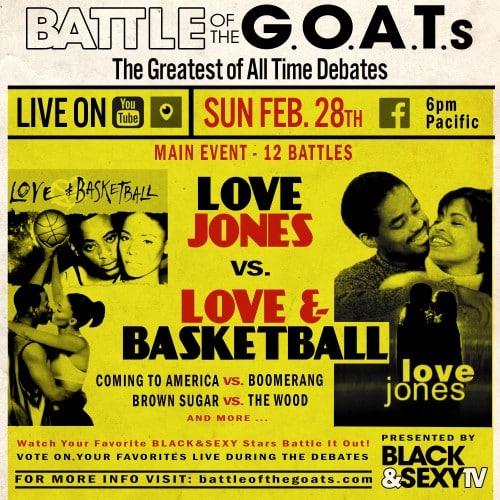 While the Concussion actor will receive the Lifetime Achievement Award, the Good Times creator will be honored with the Vanguard Award.

“As a Grammy Award-winner, television star and the most accomplished and bankable film artist in the world, Will uses his powerful voice for social change,” Simmons said.

He added, “Norman has been a true champion for people of color. He shined a light on the marginalized in our society and made us laugh. He wrote aspirational and inspirational roles for minorities.”

See, we’ve got you covered! Fade to Black.