Other Sides of St. Thomas

Ringed by clear, cobalt water and pearly sand beaches, St. Thomas’ Charlotte Amalie Harbor is one of the most beautiful natural harbors in the world. With two cruise docks serving the 32-square-mile island, St. Thomas hosts one of the busiest cruise ports in the Caribbean. Before Hurricanes Irma and Maria hit the island in 2017, up to six cruise ships might be docked there at any given time. The rowdy cruise ship crowds and animated nightlife earned St. Thomas the nickname “Rock City,” and travelers rarely ventured beyond the shops and bars near the harbor. Although most of the island’s attractions have reopened since the hurricanes, a lull in cruise ships and travelers offers the perfect opportunity to explore it without the crowds. From historic forts to innovative cuisine, visitors can get to know other sides of St. Thomas. 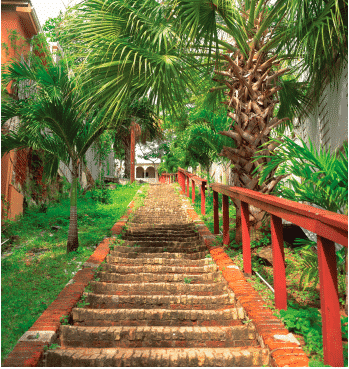 It’s always best to start at the top, and on St. Thomas, that means absorbing green hilltops and a crystalline coastline from the Skyride to Paradise Point. Located directly across from the West Indian Company dock, Skyride provides gondolas that glide 700 feet over Charlotte Amalie, the U.S. Virgin Islands’ capital and largest city. The approximately 10-minute ride treats passengers to some of the best vistas on the island, with views of neighboring Hassel and Water Islands as well as the harbor. Part of the Skyride tradition is to sip a signature Bushwacker cocktail once you’ve landed at the top of Paradise Point. The potent combo of coconut rum, chocolate, Amaretto, Baileys, and Kahlúa will have you convinced that you have, indeed, discovered paradise. If you want to go even higher and squeeze in some duty-free shopping, ascend to Mountain Top, the highest point on St. Thomas, 2,100 feet above sea level.

The panoramic lookout supplies eye-popping images of Magens Bay, considered one of the most beautiful beaches in the region, as well as St. John and the British Virgin Islands. An extensive collection of souvenirs, beach clothes and jewelry helps the shop live up to its billing as the largest duty-free gift shop in the Caribbean, but Mountain Top’s real claim to fame is as the place where the banana daiquiri was invented. Since nothing much happens on this island without a stiff, rum-based drink, don’t pass this one up as you enjoy the views. On your way down, stop and pay respect to the “Three Queens of the Virgin Islands.” 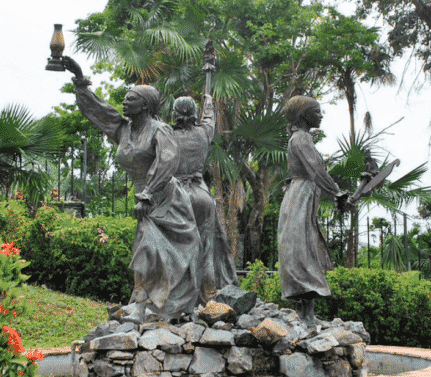 On a hill above Charlotte Amalie, a bronze fountain displaying the power and passion of Queen Mary, Queen Agnes and Queen Mathilda commands attention. The memorial honors the three women—brandishing a torch, a knife and lanterns—who led the “Fireburn” rebellion, burning almost 50 plantations and most of the city of Fredriksted on neighboring St. Croix after emancipation failed to grant humane working conditions to freed laborers in the Virgin Islands in 1878. One of the most famous landmarks of Charlotte Amalie is the flower-lined 99 Steps. The stairway winds up the hilly landscape and features bricks from Danish trade ships that served as ballast. Built in the 1700s, the city boasts several step streets or frigangs, as the Danes dubbed them, but this is the most well-known—and there are actually 103 steps, not 99. Cool off after all that climbing on the flawless shore of Magens Bay. Fringed with sea grape trees and palms (a few still bent from the hurricanes) and tranquil waves, this is the island’s most famous beach. Popular with cruise passengers and locals alike, a bar and restaurant make this a perpetually crowded hot spot. For a more laid-back beach experience, head to Coki Point Beach, on the east end of St. Thomas. This small beach is a local favorite, with dancehall tunes playing, roosters and iguanas roaming and clear turquoise water.

You can easily eat your way through St. Thomas; this island serves up dishes from fresh fish to pizza, but true foodies will be dazzled by the flavorful local cuisine. Start with a paté (pronounced pat-tay), a doughy pastry stuffed with a variety of fillings, including beef, chicken, saltfish or even lobster. Traditionally grabbed as a quick breakfast or snack, you can buy patés as well as johnnycakes (fried dough cakes stuffed with cheese, fish or beef) at local food trucks or cafés. For a taste of an authentic Virgin Islands meal, check out De Coal Pot. This charming eatery serves up such classics as oxtail stew, garlic herb conch, and red snapper creole. Plus, it offers sides including plantains, ground provisions (starchy root vegetables including cassava and carrots) and rice and peas. Wash it down with local juices such as tamarind, soursop or passionfruit. At the landmark Gladys’ Cafe, locals gorge on curry goat or stewed chicken with a side of fungi (a corneal and okra dish), with liberal sprinklings of the restaurant’s famous homemade hot sauce.

For the ultimate in elegant St. Thomas dining, head to the Mafolie Restaurant. Located 866 feet above sea level, the nighttime views of Charlotte Amalie’s harbor are almost as enticing as the menu of Caribbean fusion dishes such as stuffed Atlantic salmon, callaloo soup, and coconut-crusted red snapper.

As of May, many of the large hotels are still rebuilding, but there are plenty of small inns, villas and B&Bs available. Consider At Home in the Tropics Bed & Breakfast Inn, Emerald Beach Resort or Blue Sandcastle Villas.