“Cancer tried to destroy my body, but it couldn’t touch my spirit.” – Paulette Leaphart

Usually, when someone is interested in supporting a cause, they sign up to run or walk in some kind of race. But Paulette Leaphart is literally “going the extra mile.”

“Spartanville, South Carolina. That’s where I’m at right now,” she tells EBONY.com from the road.

If you asked me to show you where Spartanville, South Carolina is on a map, I couldn’t. But what I can show you is what courage looks like, and it is coming in the form of Mississippi native Paulette Leaphart.

Since April 30th, Leaphart and her 8-year-old daughter have been working toward an ambitious goal: to walk 1,000 miles to raise awareness for breast cancer. The mother of eight started in Biloxi, Mississippi and will end her trip in Washington, DC.

And she’s doing it all topless.

Leaphart was diagnosed two years ago with breast cancer, which is the most commonly diagnosed cancer among Black women. She says God told her that she was sick, and as a result, she underwent a double mastectomy.

“I was 47-years-old and it was 2 o’clock in the morning. I never had had a mammogram,” Leaphart says. “God woke me up and said I had cancer in my breast. That’s how I found out.”

Leaphart’s mom, aunt and cousin all had breast cancer, but for some reason, Leaphart didn’t think she would be affected.

“You know, I’m like any other woman in our race. Number one, [the mammograms] were too expensive. Number two, I just never thought it would happen to me,” she says casually.

A couple of days after that night, Leaphart went for a mammogram. Nothing came back abnormal, but she insisted on more tests.

“I went and had the ultrasound and the lady just stayed on my right breast, “ Leaphart recalls. “[She was] really snapping pictures of it. Then finally after about 30 minutes of taking pictures, she says ‘Wait a minute. I want the radiologist to come in for a minute.’ That’s when I knew she found something.”

Leaphart was diagnosed with a rare form of breast cancer, one that does not always show up on traditional screenings for the disease. Per her surgeon’s recommendation, she underwent a double mastectomy with the hope of reconstructive surgery.

But due to pre-existing health conditions, Leaphart was not eligible for the procedure.

“After I found out that I couldn’t get new breasts, I got angry and depressed for about eight months while I was going through my treatment,” Leaphart recalls.

But instead of allowing the aftermath of the deadly disease to rob her of her confidence, Leaphart decided to use her trials as catalyst for inspiration.

That’s how she ended up on the side of the road in Spartanville, SC. 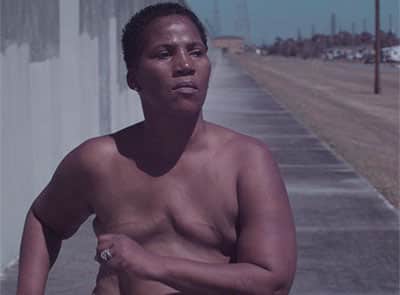 So how did it all begin?

During an outing with her children at the beach one day, Leaphart decided to take pictures topless and upload them to Facebook.

“I never really showed my scars out in public. Out of anger I took pictures, and the pictures that I took didn’t show my face. But one man walked up to me [at the beach] and said, ‘I’ll never ever complain about anything else in my entire life. Thank you.’ That was the most beautiful thing I’ve ever seen.”

The images were so well-received that she figured why not go a little further? So that’s what’s she’s doing—bringing awareness and attention to the potentially deadly illness by journeying across a portion of the country.

“I’m walking across the country topless for many reasons,” Leaphart explains. “One reason is to take the shame and the stigma away from ladies like myself who bear the scars of a double mastectomy. Women need to know what their scars truly mean. It means without the scars, we wouldn’t be alive.”

In addition to baring it all for 1,000 miles, Leaphart plans to meet with Congressional members once she reaches Washington D.C. She hopes to help secure more funding for those suffering from breast cancer but cannot afford treatment.

“72 hours before my surgery I had to sell my car to pay the bills,” says Leaphart. “I lost my house, I didn’t have insurance. I eventually got Medicare, but I lost everything. Shame on America.”

You can follow Paulette Leaphart, who hopes to complete her amazing journey by her 50th birthday on June 27, via her Facebook page.