“Remembering Sherman Hemsley” was originally published at EBONY.com July 25, 2012. As ABC broadcasts a reboot of Norman Lear’s All in the Family and The Jeffersons on May 22, 2019, EBONY shares this commentary on the comedic actor’s life and the importance of his role as George Jefferson has had on Black culture and portrayals of African-Americans in media.

Some actors become almost synonymous with their most iconic characters: Bela Lugosi is Dracula. Christopher Reeves is Superman. Jimmy Walker is J.J., and Sherman Hemsley will always be George Jefferson, that Afro-American everyman who moved on up to the East Side on the hit show The Jeffersons with that down-home, sho-nuff, arm-swinging swagga and in-your-face wingspan that compensated horizontally for what he lacked vertically. 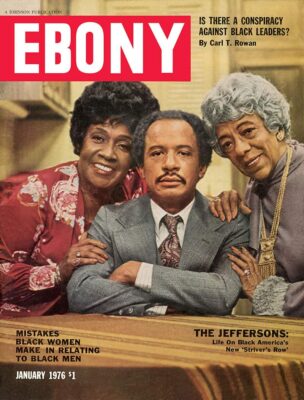 A creation of Norman Lear, some thought The Jeffersons were supposed to be a Black and tan copy of All in the Family. But the superb acting of Hemsley, Isabel Sanford (Weezy) and Marla Gibbs (Florence) breathed real life in their characters, giving the world a more honest view of our lives that went beyond the stereotypes.  George Jefferson was supposed to be a dark version of the bigoted Archie Bunker, but Hemsley’s humanity always showed through; whether he was signifying on his maid, talking smack to his wife or giving the neighboring interracial couple (which included Lenny Kravitz’s mom, Roxie Roker) the business, Hemsley made you root for him, because we all know George Jefferson. He’s the loud uncle at your cookout, the presiding elder at your church who’s always clapping in front of, or behind, the beat. And he’s the next-door neighbor who always plays his Arthur Prysock records precisely at 6:30 in the morning.

Hemsley’s portrayal of George Jefferson is surely drawn from the broad experiences of his life and art. The Philadelphia-born Hemsley was a high school dropout, a factory worker, an Air Force veteran and a U.S. postman who went to acting school at night.  He studied with the legendary playwright/director Lloyd Richards’ Negro Ensemble Company, a New York City proving ground that also spawned John Amos, Antonio Fargas and Samuel L. Jackson. He worked in Vinnette Carroll’s Urban Arts Company in a number of productions including The Witch, The Lottery and Sorry, I Can’t Cope. Hemsley’s role of Gitlow in the Broadway play Purlie caught the attention of Norman Lear, and the rest was history.

The late actor also shined in a number of roles after his George Jefferson years. He most notably was cast as Deacon Earnest Frye, the straight-laced, supercapitalistic Philly churchman on Amen with the Daddy’s little girl daughter Thelma (Anna Maria Horsford ) who pined for suave Rev. Reuben Gregory (Clifton Davis). Hemsley sat at, well, the helm of this talented cast of both young and veteran Black actors and illuminated something that had yet to be explored on mainstream television: the Black church experience.

As we mark Sherman Hemsley’s passing at the age of 74 on July 24, 2012, it’s hard not to quip that he’s doing that famous George Jefferson walk to the most glorious “dee-luxe apartment in the sky.” Here’s to hoping he’ll rest comfortably there after a life well-lived.

all in the family
norman lear
sherman hemsley
The Jeffersons
Ebony