Malcolm D. Lee just gets Black women. The nuances and intricacies of Black womanhood aren’t often considered in cinema, especially not in studio films. Much more complex than its name, Girls Trip takes its comedic cues from the best aspects of The Hangover and Bridesmaids while underscoring the specificities of what makes Black women unique. The Best Man director isn’t afraid to get hyper-specific or raunchy, and his choices pay off immensely.

Girls Trip throws the middle finger to the myth of the Black Superwoman. Not one member of the Flossy Posse has it all together. Lisa is so consumed with motherhood that it takes her friends not so subtle nudging for her to rediscover her identity and sexuality. Formally renowned writer Sasha is barely making ends meet competing against The Shade Rooms and Perez Hilton’s of the world. Then there is Dina, who is determined to live her best life by being exactly who she is. Still, it’s Ryan’s life that might be the biggest façade of all. With her ex-NFL player hubby Stewart (Luke Cage’s Mike Colter) at her side and a new self-help book, You Can Have It All, we soon learn there’s a reason Ryan has avoided her girls for so long. 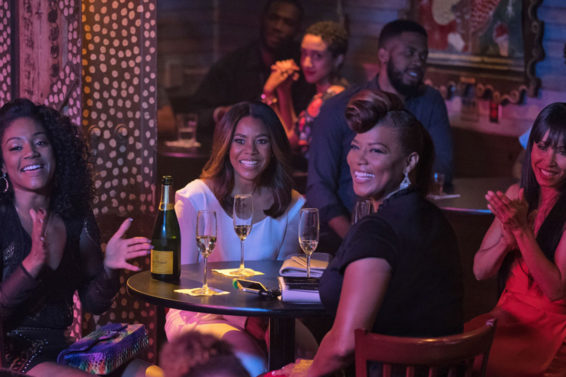 Female sexuality (sans commitment) is also celebrated here in a way that is typically reserved for erotica and white women. In Girls Trip, sex isn’t something to be whispered about or hidden in the bedroom; it’s normalized and placed at the center of this story. The “grapefruit technique” from Auntie Angel’s viral video is basically its own character. Ryan is the only married lady out of the bunch, and though her marriage does sit at the center of her storyline, overall, men are simply a source of pleasure in this film. Cue Kofi Siriboe’s well-endowed Malik, Larenz Tate’s Darius Lovehall-esque Julian, Maxwell, Morris Chestnut and some other familiar (and fine) faces.

The film has its weak spots, sometimes slipping into the realm of slapstick, and Private Practice alum Kate Walsh’s clueless white girl routine was often too forced. There is even a bit with a sausage and a meat cleaver that takes things just a step too far. And yet, the incredible chemistry between the cast and the plethora of witty— full-bodied jokes more than make up for it.

Black women aren’t “behaving badly” in Girls Trip, they’re simply living— a luxury they aren’t often afforded. Vulgarity and shenanigans in spades, sisterhood is the overarching theme here. Over the course of the film (and the ladies’ outlandish weekend), past animosities and conflicts arise. Feelings that were previously masked nearly choke the life out of twenty-five years of friendship. Fans of Issa Rae’s Insecure will surely recognize the long-gestating fight that ensues between the group of friends. Like the fallout between Molly and Issa in season one of the HBO comedy, a collision course is inevitable, but as in any real friendship, the storm passes.

Raunchy, sharp and uproariously funny, Malcolm D. Lee’s Girls Trip is a celebration of Black womanhood, female sexuality and of course, #BlackGirlMagic. (Lee even pays homage to cinematic history, giving  Queen Latifah and Pinkett Smith a Set It Off moment in the 21st century.) Hall, Queen Latifah, and Pinkett Smith are sensational, but it’s Tiffany Haddish’s performance as Dina that will solidify the film as one the best comedies of the summer.