It was more of a plea than a question, when Rodney King spoke those words on May 1, 1992. His voice trembled as he addressed America and called for an end to the looting, deadly fires, and rioting that flooded the streets of Los Angeles following the April 29 acquittal of the four officers who were captured on videotape brutally beating him, a year prior.

The outrage that sparked  lasted for five days and left 63 people dead, thousands injured and a tattooed stain on the Black community.

King concluded his speech with the following: “Can we all just get along? Yes, we can. We just have to work it out. We’re all stuck here for a while, so let’s work it out.”

“I think that speech he gave was one of the great American speeches,” said actor Roger Guenveur Smith. “It’s a message that this country has been very reluctant to listen to, but here’s a man who was brain-damaged, probably drunk, disappointed that the officers Koon and Powell, Briseño and Wind, who had beaten him walked out of that courtroom, and moreover traumatized because here are all these people on the streets of LA who are dying, senseless, crazy, stupid deaths in his name.”

In an intense one-man performance, aptly titled “Rodney King,” Smith explores “the man within the myth.” Premiering on Netflix, April 28, under the direction of Spike Lee, a long time collaborator with Smith, the film analyzes King’s complex life, the headlines, and the circumstances surrounding his death on Father’s day 2012.

In a conversation with EBONY, Roger Guenveur Smith details the historical moment, racial climate in Los Angeles and what he and Spike hope to bring to the current state of socio-politics and racism. 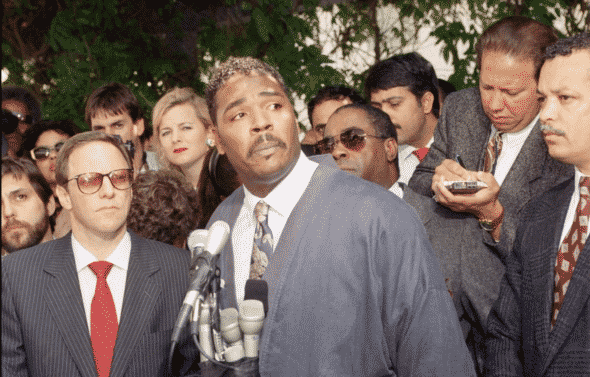 Roger Guenveur Smith: I was right here in Los Angeles. It was a memorable day. A year before when Rodney King was beaten by officers Koon, Powell, Briseño and Wind, it was not surprising to those of us who had grown up in LA and have had ongoing conflicts with the LAPD. I think what was surprising for the world was the brutality of the beating that they were able to witness through the videotape that emerged and went viral. I don’t think that it was particularly surprising to us a year later when those officers were found non-guilty of essentially all charges.

The community exploded, and it wasn’t exclusively because of the case of Rodney King. Latasha Harlins [15] was shot and killed by a merchant and the woman who shot and killed her, Soon Ja Du, did absolutely no time even though she was tried and convicted of voluntary manslaughter. The jury’s recommendation was overruled by the presiding judge. So all of this was happening essentially at the same time. The appeals to have Ms. Soon Ja Du serve some time was denied in early April ’92. So that enraged the community.

EBONY: I was able to watch a rough cut of ‘Rodney King.’ It’s intense, dramatic and felt like an analysis of his whole being, wrapped in what was going on in society at the time, including Latasha Harlins’ case. What compelled you to tell his story?

RGS: I think it’s important to get to the man within the myth. I think that we know Rodney King, if we know him at all at this point in time, we know him simply as a human piñata. You know? As the symbol of something, the symbol of police brutality, as the guy who ignited the so-called social disturbance of 1992. But he was a man, and as a man he had flaws, he had a complicated history. His end was particularly tragic because those of us who cared about Rodney King, and I was certainly among them, were really happy in the spring of 2012 because it was like Rodney was on his way back. It looked like he had beat down the demons that had been haunting him for all these years, 20 years after the riots. He published a book, he was making public appearances, getting great press coverage, et cetera. To lose him on father’s day 2012 in the way that we lost him was tragic. I know that when I opened up my laptop and saw the news, I was devastated, and I wanted to know why. Why would his life matter to my extended audience? So there’s stories of madness and villainy, but there’s also great stories of heroism here, and I wanted to tell those stories as well.

EBONY: Rodney King is your ninth collaboration with Spike Lee. The two of you also collaborated on the phenomenal Huey P. Newton Story, which was also adapted for film. That one-man production fused a lot of visual aspects and some direct interaction with audience. What went into the film adaptation of Rodney King?

RGS: Yes. Well, it’s interesting to compare the two. One was done in the winter indoors, and the audience that we had was largely a solicited audience. We asked everybody to come and dress in black so that they would be in silhouette. There were some set-ups for some of the scenes that we had to come back and do. Largely, the performance was one live performance. We used green screen technology. We had these, as you know, beautiful archival images. Some of them were still images, some of them were moving images with sound, some of them were silent. But with ‘Rodney,’ a lot more raw, a lot more visceral, and it was done in one take. We had 15 cameras, but it was done in only one take. The performance was part of a performance series called Summer Stage, which is done for free for the people in New York in public parks. It was 102 degrees and we didn’t know if there was going to be a thunder shower that night or what. But there was actually a beautiful rainbow just before we started the show. So there were those natural elements as well.

EBONY: Being that the film adaptation of Rodney King is heading to Netflix with the potential of having such a very broad viewership, what do you hope to add or change about the conversation as it relates to police brutality, racism and the protests of today?

RGS: I think that we’re very blessed in that we’re going to immediately have an international, multi-lingual, audience. But in terms of putting the focus on these issues which tragically continue to reverberate, yes I hope that this film, as I know this play has, will enrich and illuminate the conversation,  but also the movement for freedom and equal protection under the law.

When we did the play in Brooklyn, Spike Lee and his family were in attendance, as was my family, and we had a town hall meeting after the play. There was  overflow crowd that night that flooded the lobby, watching it on a monitor. We spontaneously, all of us, decided that we need to get out of the theater and get in the street because this was the same week that the non-indictment of officer Pantaleo, who had choked Eric Garner to death, was announced. We made a public demonstration which was part of an ongoing struggle for recognition and for liberation from the tyranny of state sanctioned violence against our community.

We do these films not simply as artistic exercises, although I think that Spike’s work, and I would like to think that my work, has advanced the aesthetic landscape, but I think that we also do these things because we have a notion of art as being a mirror on society.