[The Upload] Superproducer Ryan Leslie Dials Up Diversity With His SuperPhone

By #TeamEBONY  | May 3, 2016
Share
You might know Ryan Leslie as the musician and producer who discovered Cassie Ventura and the singer behind the hits “Diamond Girl” and “Addicted.” You might even know that he’s released his last two albums via his own e-commerce initiatives, but you might not know that he’s a legit tech entrepreneur.
After the success of his web platform, #RENEGADES Club– that other artists like 50 Cent and Talib Kweli also used to self-distribute their music, merchandise and build community– Leslie went full steam into creating a viable mobile product that’s set to re-engineer the music industry and the way artists sell to and build relationships with their customers. And he’s got the $1.5 million backing of Silicon Valley and other investors to do it. With his company Disruptive Multimedia, Leslie launched SuperPhone, a personal relationship management tool that offers dashboard insights into his nearly 50,000 audience through his text communications with them. (Feel free to text him at 646-887-6978 to see what we mean.)
Ebony.com caught up with Leslie to learn more about how others can leverage the tool to build their businesses and what he thinks about diversity in tech.
EBONY.COM: Can you talk a little bit about the impetus that drove you to create Superphone?
Ryan Leslie: I wanted to be able to thank everyone. And to thank supporters personally, you need to know who they are. If you buy my album on iTunes, I have no idea who you are and there is no way for me to thank you personally. When you buy from the App store or the iTunes music store, they can easily market to you, and they use and aggregate your purchases and build an incredible database of user information so they can make smart decisions on what kind of products you’d be willing to spend on.
When I looked at my business structure in 2010, I evaluated it in the way I would evaluate Apple or Google or Amazon, all companies that I’ve invested in and I asked myself, “Would I invest in the Ryan Leslie business given the fact that Ryan is unable to have the insights that Apple, Google or Amazon have around their customers?” Once I placed a rational lens on my business infrastructure, I realized that the secret to the success of those companies was in their ability to communicate directly with their customers.
When I realized that all of my resources, all of my energy, all of my content, all of my communication strategies were being invested and tailored to platforms that I did not own, I realized I needed to make a decisive change to the way I conducted my business and that was really the genesis of this concept that now exists in the form of SuperPhone today.
EBONY.COM: How is this platform useable for an artist who is not independent. In short, can a label artist make use of this?
RL: I believe that any artist or any label that isn’t making use of some sort of very precise data strategy is doing a disservice to themselves if they are an artist, or to the artist that they represent if they are a label. The business ramifications between the difference in the value proposition between owning 1,000 Instagram followers or owning a direct phone number on 1,000 people that want to buy your album is so transparent. As an individual you should have ownership of the relationships that you appear to maintain on your social profiles.
EBONY.COM: Do you see this D2C (direct-to-consumer) channel being used beyond the music industry?
RL: This is for everyone. This is why I have converted my entire business to a D2C model.
Oprah has 32 million Twitter followers. Her last Tweet only received about 1,000 ReTweets. What happened to the other 31,999,000 followers on Twitter? That clearly illustrates that there is a huge chasm which disconnects you from any audience you are building on social media.
Ninety-five – 99% of text messages are read within the first 3 minutes of them being delivered. So, if someone is handing you a platform in which you can reach everyone who is interested in supporting you via SMS, this is the platform which should be employed by virtually everyone.
EBONY.COM: You were able to get Silicon Valley money for this platform yet most African-Americans and women aren’t getting those dollars. What can we do to change this?
RL: Build a minimum viable product that proves that what you’re offering is a solution that’s truly valuable to the world. What investors are looking for and what I’ve learned is that you have to be truly passionate about what you’re building. In my case, I was using this technology and it was having a huge impact on my life. In the future, if by some strange series of events, SuperPhone fails and goes bankrupt, I will personally underwrite the maintenance of the platform just for me at whatever price it costs because that’s how valuable it is for me.
One piece of advice Quincy Jones gave me in music production was: “You have to listen back to the record you’ve made and you have to really evaluate does this record give you the goose bumps because if it doesn’t give you the goose bumps you don’t have a chance of giving someone else the goosebumps when they’re listening to this record.” I would say that advice applies squarely to those who are entrepreneurial.
If you’re helping someone make money or save time, then this is a product that is valuable. This advice crosses racial lines, it crosses gender lines, it crosses transgender lines. Is your product really going to be game changing; is it going to inspire or save someone time or increase someone’s enjoyment? 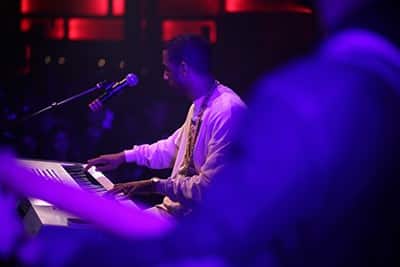 Credit: Mylez “Myvision100” McBange
EBONY.COM: Are you doing anything to promote diversity in tech?
RL: For one, I’m being an incredibly focused and passionate minority founder. Number two, I wanted my pool of investors to reflect the people I want to serve with this product so I reached out to my buddy Taj Clayton, one of only four black partners at one of the leading Intellectual Property firms in the world, Fish & Richardson. So Taj and myself put together a minority syndicate whereby the number of initial investors in Superphone outweigh the number of traditional investors.
I think promoting diversity in technology really means being a role model that young people of color and that young women can look at and say this is possible. This is a real pathway that someone who goes to Code Academy online and teaches themselves to successfully code a viable business, earn investment, raise money from other people of color as well and actually continue to set the standard high for great technology and change the lives of millions, even billions of people around the world.
EBONY.COM: You coded this yourself? Was coding in your background?
RL: It took me about 40 – 60 days to sit in front of a computer and teach myself the bare minimum code to build the first version. I have since employed an incredible team led by Brandon Brisbon, a young brother from Denver, to build a scalable version. To anyone interested in learning to code, Code Academy is a great place to start. It’s free and it’s really directly a function of how much time you invest in front of that computer screen teaching yourself.
EBONY.COM: You’re managing those conversations yourself without a community manager? How does that scale?
RL: First, there is very specific directed information that I would like to know about everyone who texts me. First, if you text me from an unknown number, who are you? Number two, if you’re writing me are you interested in supporting my album? If you are interested in supporting my album I would like to thank you personally.
We have very powerful artificial intelligence and machine learning which is synthesizing all of my conversations and learning how to respond as me. Not because I’m not interested in personally responding it’s because it is humanly impossible to respond to 50,000 people.
There are several ways I’m able to manage these conversations. I’m able to tag every single person as they come into my phone book whether you’re an investor or a photographer all of this is happening in real-time as people are texting. So, if I mark someone as a super VIP my phone is tracking my communication and I can trigger a message to them. Should two weeks go by and we haven’t exchanged a text message or had a phone call, my phone will automatically reach out to you.
Lynne d Johnson has been writing about music since the early 1990s, tech since the late ’90s, and the intersection of technology and everything else since the early 2000s. She currently writes, teaches and consults companies on how to better engage with their audiences. Follow her on Twitter @lynneluvah.