Imagine a 1921 Broadway show so outrageously successful that New York City officials had to convert a two-way street to a one-way thoroughfare to accommodate the intense traffic. Now envision that this musical was created, performed, directed and co-produced by African-Americans. Surely this would be mentioned at least once every February to commemorate Black History Month, right? Wrong.

When Shuffle Along, written by F.E. Miller and Aubrey Lyles, with music by Noble Sissle and Eubie Blake, appeared on the Great White Way (a nickname that references the many electric lights used on theater marquees) 95 years ago, it set the stage for Blacks in theater, but somehow the show and its creators have been lost in the history books. 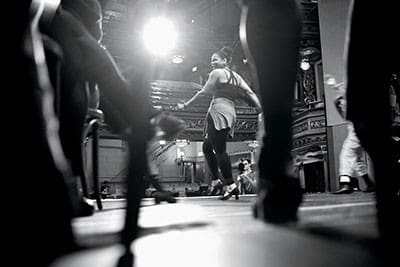 Fortunately, change is set to blossom this spring. In April, Tony-winning director and writer George C. Wolfe premieres his latest work, Shuffle Along, or The Making of the Musical Sensation of 1921 and All that Followed. The ambitious piece plans to give audiences a history lesson while offering some of the best entertainment in town. On the threshold of its debut, EBONY explores the significance of the revival and why the theater needs this show now.

If you weren’t schooled on the original Shuffle Along, you stand in good company. Many of the current cast members were not aware of the source material before they joined the project, including six-time Tony Award winner Audra McDonald, who plays Lottie Gee, the original production’s female lead.

“I had never heard anything about the history of the show,” she explains. “I didn’t know much of this story, which so deeply and directly affected me. This is my theater lineage … I was immediately intrigued.”

Thankfully, Wolfe, well-versed on the musical, decided 2016 was the perfect year to bring the show to a new audience. “[Shuffle Along] was an extraordinary cultural landmark and more people should know about it,” he says. “It changed New York; it changed theater. It was truly a culturally transformative moment.” 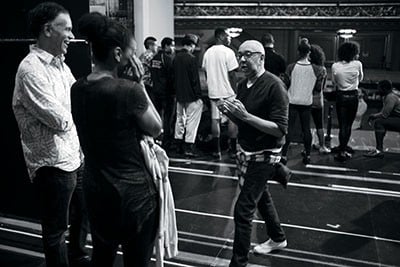 Wolfe is known for keeping things real. His career has been defined by tackling large projects such as the epic Tony Kushner-written plays Angels in America: Part One and Part Two, which explored AIDS and homophobia, and Reg E. Gaines’ genre-defying Bring in da’ Noise, Bring in da’ Funk, a hip-hop infused musical revue that provided a lesson in Black history. So it’s not surprising that Wolfe chose to resurrect the original Shuffle Along in addition to telling the story of how it came to light and what happened in its robust wake—all in one production.

“I just fell in love with [everyone] who made the [original] show,” he says. “[This production is about] celebrating ordinary people with talent, doing extraordinary things collectively.”

Although theatergoers will be entertained, they’ll also be challenged by the content. Wolfe divulges that the creative team is currently “exploring” the use of blackface in the play. The makeup treatment, typically used by White minstrel-era performers, exaggerated and mocked the features of African-Americans. Usage of blackface is quite controversial in contemporary American culture but was authentic to the period. In totality, the fusion of past and present will contextualize a century-long journey of the Black stage performer.

But this is Broadway, and teachable moments aside, the entertainment value of a show ultimately fills seats. So Wolfe has assembled a comprehensive team of the industry’s best talent. “The new Shuffle Along is about icons and legends performed by icons and legends,” says Brandon Victor Dixon (a Tony nominee himself), who takes on the role of composer Eubie Blake. Joining him and McDonald is Adrienne Warren, along with Tony winners Brian Stokes Mitchell and Billy Porter, noted stage stars Joshua Henry, Felicia Boswell and Amber Iman, and an assemblage of more than 25 singers and dancers.

This multigenerational excellence is fitting; the original production featured then-unknowns Paul Robeson and Josephine Baker in the ensemble. Only time will tell who will become the next legend from the current cast. 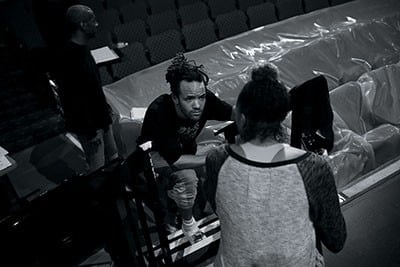 “This has given me an opportunity to exercise the other dancer in me,” says the Tony-winning virtuoso. “Shuffle Along is not the Noise/Funk kind of tap dancing; it’s on a more evolved and mature level, aligned with the style that was done in the 1920s.”

On the heels of #OscarsSoWhite, Wolfe continues to make it his duty to cultivate Black stage talent and storytellers.

“We all come from someone,” he says. “And it’s very important that you keep learning how far back your story goes—not just in a genealogical way but culturally and spiritually as well.”

Iman agrees. “This is one of the first times in my career I’m truly proud of myself,” she says. “I want people to understand how wonderful it is for us to be able tell our own story our way. There is so much joy in that.”

Shuffle Along, or The Making of the Magical Sensation of 1921 and All That Followed opens April 28 at the Music Box Theatre in New York City. For information, go to shuffle- alongbroadway.com.

This Broadway season, one block along West 54th Street will showcase the hottest Black stars of television, film, music and theater, including the cast of Shuffle Along. EBONY gives you the rundown:

Academy Award winner Lupita Nyong’o makes her Broadway debut in this gripping drama alongside stage and screen vet Akosua Busia (Nettie in the film version of Alice Walker’s Pulitzer Prize-winning novel, The Color Purple). The play explores the lives of five women as they band together in hopes of surviving Liberia’s second civil war. Eclipsed is the first Broadway production written, directed, performed and designed exclusively by Black women.

Runs through June 19 at the John Golden Theatre

Oscar and Grammy winner Jennifer Hudson, in the role of Shug Avery, headlines the cast of this musical. In addition, British actress Cynthia Erivo, portraying Celie, shines as brightly as the show’s marquee. Be sure to bring tissues, and pay particular attention to Danielle Brooks’ (Orange Is the New Black) buoyant portrayal of Sofia.

Open-end run at the Bernard B. Jacobs Theatre