So, I’m sure you’ve seen this image by now.

A bird-chested Bow Wow lounging atop some crisp dollar bills.  Based on the caption below, it seems that the one-time prodigy of Snoop Dogg is pretty pleased with himself. Alas, the Interwebs have spoken and the verdict is that his “stash” looks more like what one would spend on a light grocery run versus a mattress for a mogul. 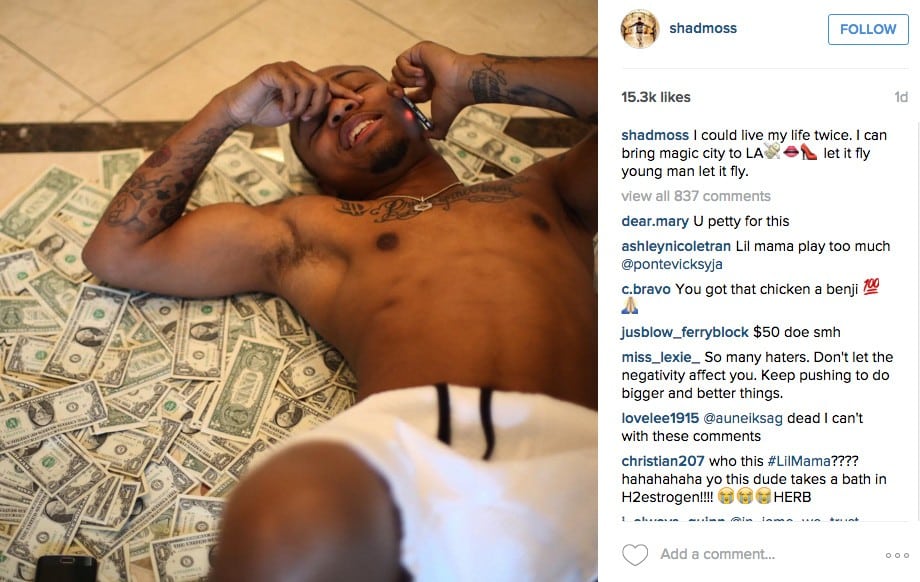 I truly thought this sad, shameless act would be the worst thing we’d see this week. The combination of boasting and bumminess is a testament to the times we live in now, but still it is galling to see it acted out by the ex of Erica Mena.

But as I can see from some other developments over the past few days, I was dead wrong.  Here are two other fools who need to evacuate the Internet and go back to pen and paper, stat.  These individuals simply lack any semblance of Social Skills.

Oh, what can we say about the leader of an academic institution who allegedly has turned Twitter into his own personal diary of a madman.  (No shade to Scarface.) Whether taking shots at “dumb people” he feels need to ride the “Jerry” bus, being homophobic, or judging light-skinned women to be inferior to their dark-skinned counterparts, Raymond Ankrum is clearly an individual who does not know the meaning of decorum.  The fact that this lawsuit bullseye, at least at one time, was entrusted with the shaping of young minds at the Riverhead Charter School in Long Island lends an even more troubling filter to his online antics.

The Takeaway: Nobody can stop you from being a fool if you aggressively endeavor to be one.  However, if you are smart, you will keep these poisonous thoughts to yourself.  An idea off the top: Invest in a notebook and at the end of each week, burn it in a trash can.

What is it that people don’t understand about venting their bigoted spleens on Facebook?  Do they seriously believe that only their friends, family and play cousins see these statuses?  And if so, what kinds of friends, family and play cousins are in cahoots with racist ratchetness?  I am lucky enough not to know.  I would turn myself in to the Social Media Police: Vice Squad if I (a) possessed these ridiculous thoughts and (b) felt compelled to share them.  Such is NOT the case for a South African oaf named Penny Sparrow, a White woman who decided that some Black folk on the beach were littering to the extent that she needed to refer to them as monkeys on her FB page. 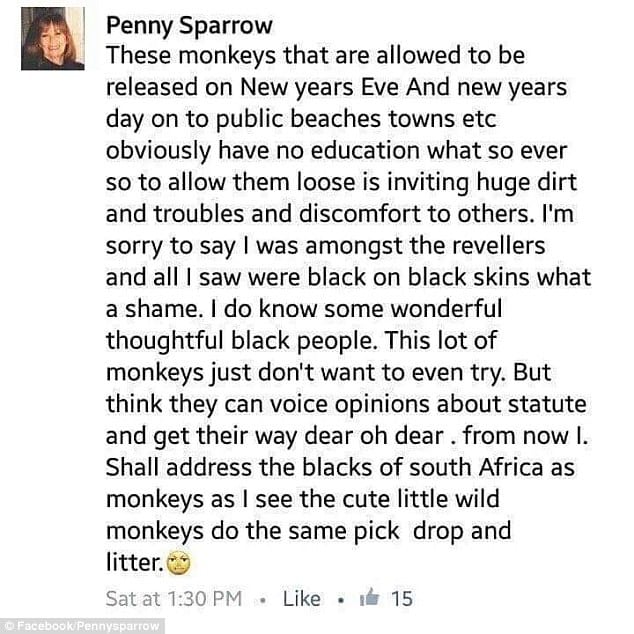 Okay, take a deep breath and perhaps a sip of water because it gets worse.  Upon getting caught, like so many of her fellow supremacists, Sparrow digs in even deeper with this (reaching for the right word) defense:

“Every year it is the same story; it’s their [black people] day and we don’t go in the beach, we don’t interfere, we let it be. We all know it and there is nothing wrong. We stay out of the way and stay at home,” she said, according to News 24.

“I am sorry that it has taken such a viral turn, but it was just a statement of how it was. I made the mistake of comparing them [black people] with monkeys. Monkeys are cute and they’re naughty, but they [black people] don’t see it that way, but I do because I love animals.”

“I wasn’t being nasty or rude or horrible, but it’s just that they [black people] make a mess. It is just how they are.”

Listen, I know.  I know. Don’t book a flight to deliver her a much-needed arse-whupping just yet.  Not. Just. Yet. Anyway.  Here’s the piece de resistance:

“I work with blacks and I am kind to them and they have accepted me. I have worked with an Indian girl who kept my job open while I was in hospital. She’s a wonderful girl and she’s an Indian. Blacks can also be wonderful and I don’t hate the black people, it is just a fact that it was so filthy and dirty this year and that is my only point.”

The Takeaway: Huh? Oh, sorry. I seriously cannot think of anything other than flying to South Africa and pile driving her into this trash that so offended her.  Get back to me in a few days.  In the meantime, help me keep an eye out for online cretins via [email protected]  Streets is watching.