The battle between sweet or savory grits is fought along regional lines and age demographics. EBONY brings in a food historian to settle the debate, read more!

It’s not a new discussion, but the recent social media war over sweet vs. savory grits has taken on a highly charged emotional tone that doesn’t surprise any of us who love the creamy porridge, which is made from dried hulled corn kernels that have been ground to a fine, medium or thick consistency.

Unlike the recent sugar/no-sugar cornbread discussion inspired by the article “Why does sugar in cornbread divide races in the South” by Kathleen Purvis, food editor of The Charlotte Observer, the battle over sweetened grits seems to be fought along regional lines and age demographics. So far, it seems as if the addition of sugar is often attributed to descendants of those who moved away from the South during migrations following the Civil War, while savory grits lovers have immediate ties to that part of the country.

As a strong devotee of the no-sugar (ever!) grits camp, I’m convinced that the appreciation for savory grits requires a Southern upbringing, or at least being raised by someone who had the benefit of such an upbringing. It also helps to be introduced to savory grits before your second birthday. As a member of the first generation in my family to be raised outside of the South, my foray into grits did not include sugar.

On the other hand, and much to my dismay, I raised a member of the pro-sugar grits camp, based on the fact that my son, with second-generation away-from-the-South roots, succumbed to stirring sugar into his grits under the influence of his stepfather, another second-generation Northerner.

“Grits are a very important comfort food for the African-American community,” says Charla Draper, a former food editor for both EBONY and Southern Living,  adding, “Most people eat grits the way they did as children. It’s a comfort food flavored with strong emotional feelings, including memories of home.”

In 2001, when Draper, gathered editors, producers and researchers in Chicago for the Grits and Greens conference about regional and racial aspects of soul food and the media, sponsored by the Culinary Historians of Chicago, the importance of grits and cultural memories figured prominently in the conversation.

“For me, they’re a savory option for breakfast, lunch or dinner … any meal,” says Draper, who returned to Chicago from Birmingham, Alabama, in 2012 to work as an independent food consultant.

How does the second-generation Chicago native enjoy her grits?

“Without sugar … the way my grandparents (from Alabama and Louisiana) served them to me. Probing through several decades of Black cookbooks for grits recipes weighs in heavily with the no-sugar camp with a large selection of savory recommendations,” Draper explains.

And what do cookbooks say on the matter?

Edna Lewis, renowned chef and author loved her grits with a twist. “Although butter is often the only flavoring added to grits, I like to eat them with shrimp paste,” Lewis wrote in her seminal book, In Pursuit of Flavor. “They are usually eaten with ham, poached eggs, sausages, fried chicken or fish.”

“Breakfast wouldn’t be breakfast at Sylvia’s without a side order of snowy white grits,” legendary chef Sylvia Woods wrote in Sylvia’s Soul Food, referring to her famous Harlem restaurant.

Singer Mahalia Jackson’s baked grits recipe in Mahalia Jackson Cooks Soul includes butter, cheese and garlic. In Down-Home Wholesome, Danella Carter describes eating grits at “dinnertime, with a little butter and salt, usually beside a plate of fish.” She also cautioned against taking shortcuts. “It’s best to avoid the instant or quick grits unless, of course, you don’t mind the lack of texture.”

“Hominy is called by the Creoles the older sister of grits,” the book noted. “The little Creole children were reared on ‘La Saccamite,’ The hominy was boiled in water in the same proportions as grits, but, of course, allowed to cook much longer, till the great white grains of corn were very soft and yielded easily to pressure. It is still cooked in the same way, and eaten with milk or sugar, the latter being a favorite dish with the Creole children.”

So when it comes to the Great Grits Debate, it appears that how you enjoy them is a matter of personal taste.

Donna Battle Pierce is a food editor and test kitchen director. Her most recent research included trips to explore public and private archives in South Carolina, South Dakota, Nebraska and Massachusetts for a book she’s writing about Black cooks, restaurants and recipes. She currently writes, teaches cooking classes and conducts seminars about saving family recipes. Follow her on Twitter @BlackAmerCooks.

Want to try your hand at a savory grits dish? 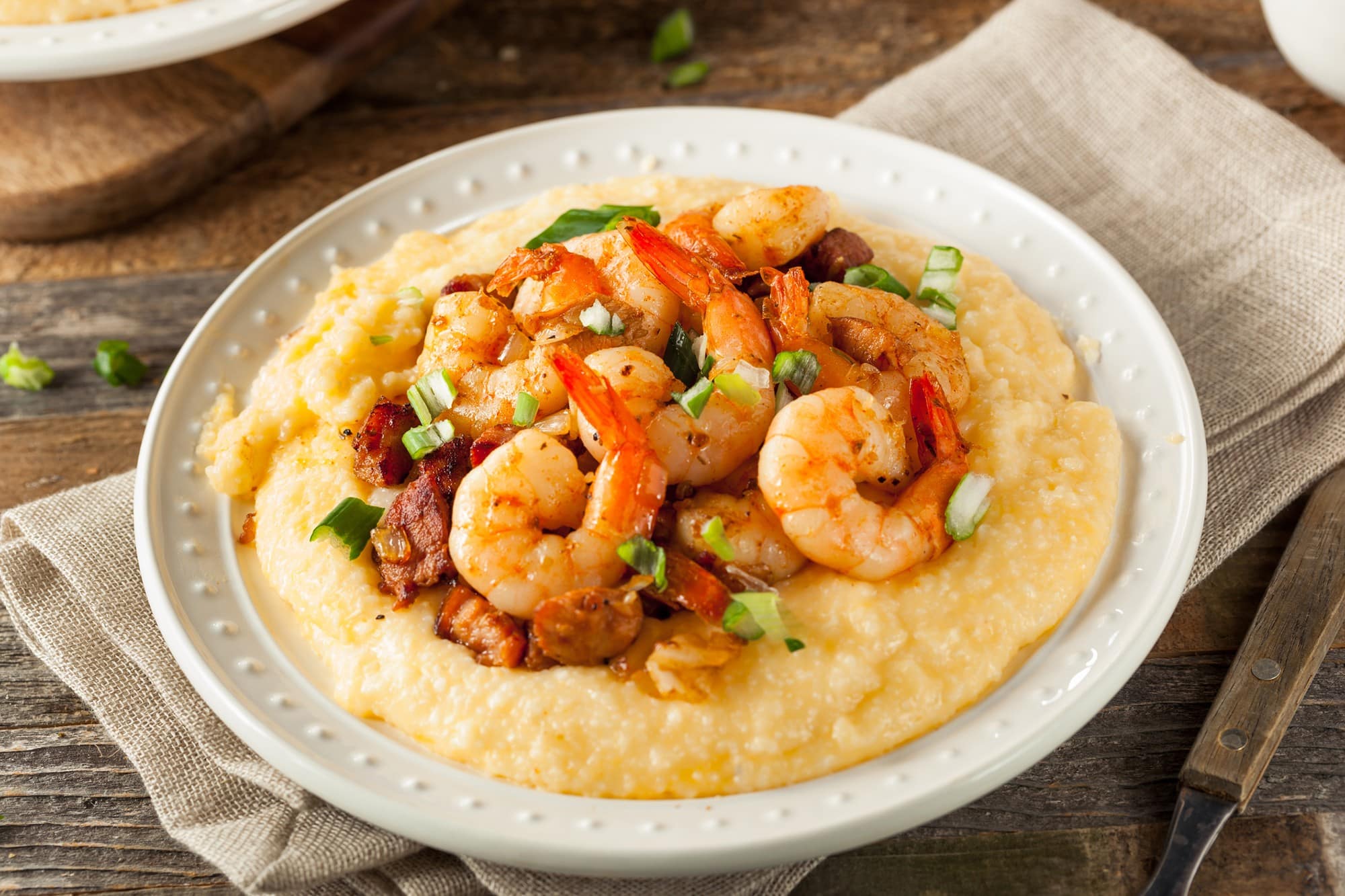 2 cups water, plus more as needed

To Cook Shrimp and Serve:

Peel and devein the shrimp. Leave the tails on; reserve the shells. Cover and refrigerate shrimp until ready for use.

For the stock: Combine the shrimp shells, onion, celery, carrots, bay leaves tomatoes, lobster base, Old Bay Seasoning and 3 quarts of water in a large pot. Heat to a boil; reduce heat to low. Simmer 1 hour. Taste and add a little more lobster base and/or Old Bay if needed. Transfer to a blender; blend until smooth. Strain the liquid through a fine sieve lined with cheesecloth. Measure 1 cup of stock; freeze the remaining stock for another occasion. Place the shrimp in a bowl with cayenne pepper and salt to taste. Drizzle with lemon juice; set aside.

To make the grits: Heat the milk, 2 cups water and salt to a boil in a medium pot. Slowly stir the grits into the mixture, whisking constantly until all combined. Bring back to a boil; lower heat. Cover and simmer for 30 to to minutes, whisking regularly and reaching the bottom of the pot to keep grits from sticking. Stir the butter and cream into thickened grits. Adjust seasoning if necessary. Keep the grits warm, whisking periodically, while you make the sauce.

For the sauce: melt the butter over medium heat in a small saucepan. Stir in the flour slowly to make a roux. Reduce the heat to low; cook stirring constantly, being careful not to burn, until the roux turns pecan brown, about 7 to 10 minutes. Slowly stir in the reserved shrimp stock and Worcestershire sauce.

To cook the shrimp: Heat the oil in a frying pan over medium heat and add the shallot and garlic. Cook, stirring, 30 seconds. Add the shrimp. Cook, stirring just until shrimp begin to turn pink. Add the sauce. Simmer over low heat until it begins to thicken.

To serve: lace grits in the center of a serving platter with the shrimp around the perimeter. Pour the sauce over the shrimp. Makes 4 servings.