Spotify Wants You to Create Group Playlists on Facebook Messenger

Creating Spotify playlists is about to get a lot more communal. As much as we love crafting our playlists on our own, putting one together with a group of your friends is something that opens up a whole other realm of entertainment. Music is a staple in many of our lives, so who doesn’t want to know what tunes your friends are into. But assembling a playlist between several people can be tough to do if you don’t all have the same app. Fortunately, Spotify is looking to change that.

Two months ago, Spotify added a bot into the Facebook Messenger app that helps users search for and share songs.On Wednesday, Spotify announced that it’s kicking things up a notch by making it easy for you and your friends to collaborate on some fire playlists. Simply called “Group Playlists for Messenger,”the music streaming service’s add-on to its Messenger bot lets anyone in a chat add songs to the playlist queue, including ones that aren’t on Spotify. To get started on a group playlist in Messenger, just select the Spotify Messenger extension while you’re in a Messenger chat. Once a new playlist has been created and named by a Spotify user, all it takes is the click of a button to start adding your own tracks into the mix.

Don’t have Spotify? No worries. Non-spotify users can get in on the Group Playlists for Messenger too. Anyone in your group chat can add songs to the playlist. The only caveat is that those who don’t have Spotify will only be able to hear previews of the songs instead of the full versions.

According to TechCrunch, Spotify says that millions of playlists have been shared through the Messenger bot since it launch in April. The addition of the Group Playlists feature is a major tool that the music streaming service will utilize to tap into the nearly 2 billion existing Facebook users. 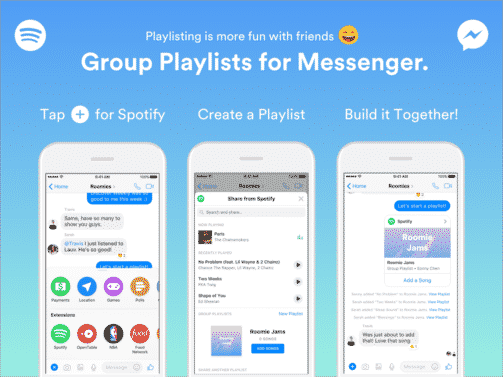