Tamar Braxton may be in need of a new band. The singer shared on her Instagram feed that her band members did not show up for her scheduled performance in Philadelphia on Thursday night (July 5).

“Well…my band didn’t show up. But the last min show was cool thanks Philly,” the singer said in a story on the social media platform. 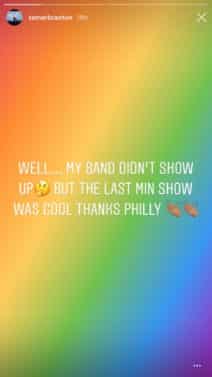 The “Bluebird of Happiness” singer, then posted a video of herself performing without the presence of a band. The original caption of the video read, “Well my band is fired (tag the bestest) ..CAUSE….my tour got picked up today officially ?#bboh.” Sometime later in the evening, Braxton replaced the message with a flexed arm emoji.

There has been no official announcement about a tour with the youngest Braxton sister.