Telfar Doesn't Care What You Call It at NYFW

“I don’t care what you call it as long as you’re calling it [something],” designer Telfar Clemens told EBONY a few weeks ago over a Skype call from Paris. He had just gotten to the city for Market Week after being in China working on his latest collection. But Friday night, backstage after his fall 2017 showing, the designer was repeating himself to another interviewer.

“’I don’t categorize it as anything,” he told them. “Other people put a label on it but I don’t care what you call it.” 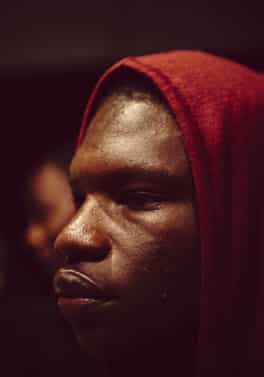 And it’s true, other people do consistently and constantly put labels on the work of the Queens-born designer. Some call it streetwear (“It’s a part of that language,” the designer acknowledges) while others have painted it as athleisure and more have attempted to lump it in with a new generation of “genderless” brands. But, respectfully, he isn’t a part of that group. Clemens has been in this industry defining his own lane and aesthetic for 15 years. His brand is one of perseverance, hard work and true skill. This isn’t some fly-by-night venture.

One of the reasons why it’s so hard to label Telfar is that one of the main components of his brand involves taking things apart and then reassembling them. The designer himself refers to this technique as “simplex” and it has become basically a trademark for the brand. At Friday’s New York Fashion Week show, jeans came down the runway with the tops having been replaced with a more forgiving stretch material while oversized coats were presented as monochromatic works composed as large swatches of various fabrics. 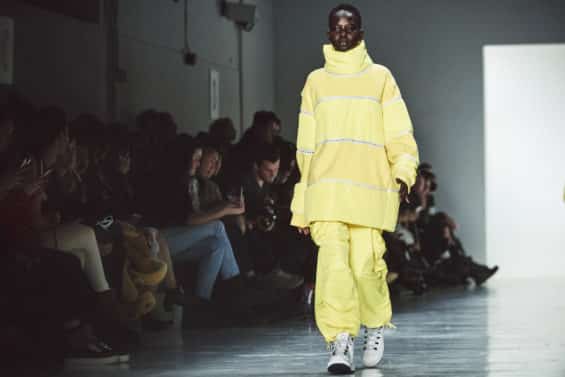 “The point of reference was kind of everywhere and nowhere at the same time,” Clemens told EBONY backstage at the show. “It was really experimenting with this idea of a sweatshirt and a nylon shirt and a dress shirt that’s made out of four different fabrics. It was really about pairing different kinds of fabrics together and seeing what kind of movement and shape they have; that makes it a Telfar garment.”

While that was a significant part of the collection, there was also another point that stuck out: the logo. For Fall 2017, Clemens rendered his logo as everything from pockets to berets and even elbow patches. It was just one more way Clemens questioned the industry. What is a logo? What is its usefulness? Must it just be a symbol or can it be an actual component of the design? 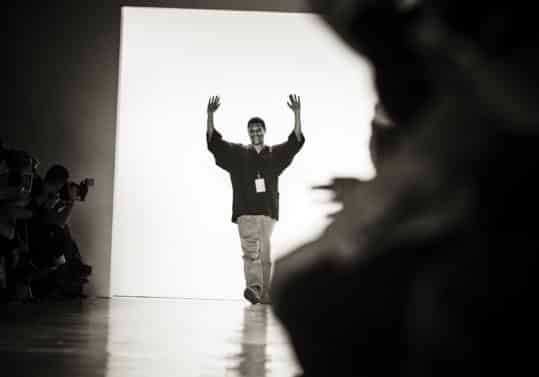 And the work that Clemens does hasn’t gone unrecognized. Last season he cast Olympians like Miles Chamley-Watson and Tori Bowie as models. In the gift bags under the seats at the show this season were t-shirts and beanies from show sponsor White Castle, who the brand has worked with for a few seasons — the after parties the pair put on are legendary. The fast food restaurant’s logo comes altered though: the C has been transformed into the Telfar logo. Soon, that partnership will be stepped up even more as Clemens has designed a capsule collection of products as well as all of the uniforms for the chain to be revealed later this year.

So no, Clemens doesn’t care what you call his brand as long as someone’s buying it. And people are.

Images by Erick Ruales (MADE).