The History of the Afro

A little over a year ago, Beyoncé declared to the world: “I like my baby hair with baby hair and Afros.”

As far as hairstyles go, it doesn’t get much blacker than the Afro.

“Nappy,” “woolly” and “unruly” are only some of the unflattering adjectives that have been used to describe Black hair during and post slavery.

In the 1960s, Black folks finally said, “To hell with that!” After decades of subjecting ourselves to European beauty standards, we decided to take back our hair. This newfound self-acceptance was widely known as the Black Is Beautiful movement, which sprang from the Black Power movement.

With political activists such as Angela Davis, Huey P. Newton and Jesse Jackson proudly rocking Afros while fighting oppression, the hairstyle quickly emerged as a symbol for Black beauty, liberation and pride.

“Black activists were agitated with White supremacy and Jim Crow laws, and they wanted to show an outward sign of their frustration toward Dr. Martin Luther King Jr.’s nonviolent philosophy,” explains Chad Dion Lassiter, president of the Black Men at Penn School of Social Work, Inc. at the University of Pennsylvania School of Social Policy and Practice. “The Afro was Black beauty personified without White validation, and it did not care about critics. For many Black men, it was about cool pose and hyper-masculinity in the face of police brutality and constant oppression.”

That’s why Allure’s tutorial in its August 2015 issue titled, “You (Yes, You) Can Have an Afro, Even If You Have Straight Hair” was particularly irksome and insulting on many levels. Strike one? The model featured was White actress Marissa Neitling. 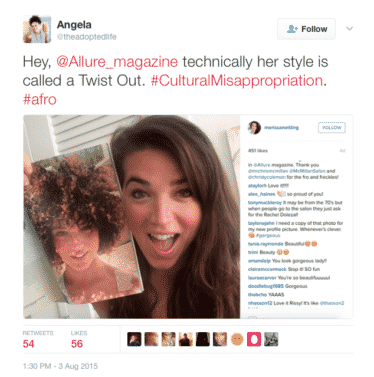 It certainly didn’t help that the hairstyle shown was more of a twist out than an Afro and the publication failed to explore the Afro’s origins.

Allure issued a response to BuzzFeed amid the controversy: “The Afro has a rich cultural and aesthetic history. In this story, we show women using different hairstyles as an individual expressions [sic] of style. Using beauty and hair as a form of self-expression is a mirror of what’s happening in our country today. The creativity is limitless—and pretty wonderful.”

If Allure’s editors had pointed out some of the Afro’s “rich cultural and aesthetic history” with its readers, then maybe we wouldn’t still be here talking about the tutorial two years later. Just sayin’.

What’s interesting about the Afro is its cultural trajectory. In the early 1970s, the’fro was perceived as a major political statement that would’ve never appeared in the pages of a mainstream publication, especially as a hair tutorial. It didn’t take long for the hairstyle to become associated with Black ass-kicking thanks to the rise of Blaxploitation films, including Shaft, Foxy Brown and Coffy. It was seen as less militant as The Jackson 5, Sly & the Family Stone, Billy Preston and other acts appeared on television shows, such as Soul Train to promote their music, while showing off their bountiful Afros as they worked the stage. 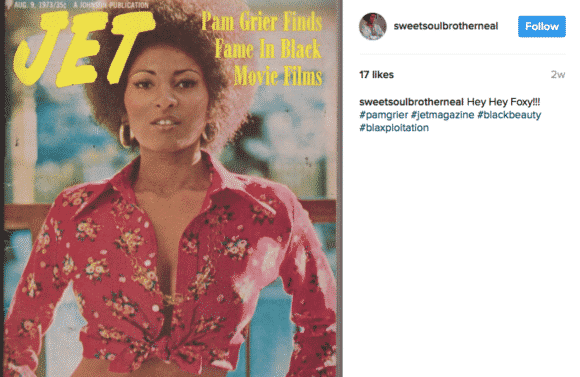 “The Afro today holds little to no significance with those political forebears who were radical and posed a threat to the prevailing social order of White supremacy,” Lassiter says. “Even in the Black Lives Matter era, the Afro is seen as less Afrocentric. This could be due to the fact that today’s social movements lack the militancy of the ’60s and ’70s.”

With braided styles such as cornrows starting to take center stage the Afro’s appeal waned in the mid-1970s. Throughout the 1980s and for much of the 1990s, the Afro was pretty much non-existent. That is until the late 1990s when the Natural Hair movement as we know it today was getting underway. Black women started trading in their relaxers and weaves for their God-given kinks, coils, curls and waves.

“The Natural Hair movement had a big impact on reviving the Afro, specifically due to the fact that the Afro is the most natural reaction for textured hair,” says Dee Carrington, Florida-based master hairstylist. “I’d venture to say the Afro is the cornerstone of the movement, but it has emerged as something more unique as it relates to each individual. Now we have so many different Afro shapes and sizes.”

According to Miss Jessie’s co-founder Miko Branch, the Natural Hair movement created a safe and accepting space for those who wished to sport more volume and texture. Branch and her late sister, Titi, were among the early pioneers of the movement.

“Unlike the 1960s, when natural hair, specifically the Afro, was more of a political statement and then later a fashion trend, the official Natural Hair movement of the late 1990s was more about African-American women finding their way to healthier hair styling that also looked good,” Branch says.

Let’s not forget or deny that many of us became accustomed to straightening our hair to the point where we were clueless when it came to caring for our hair in its natural form.

With celebrities such as Questlove, Colin Kaepernick, Erykah Badu, Maxwell, Lenny Kravitz, Lauryn Hill and the late Prince rocking the Afro in more recent years, there’s no denying the Afro is officially back in style and it’s blacker than ever. 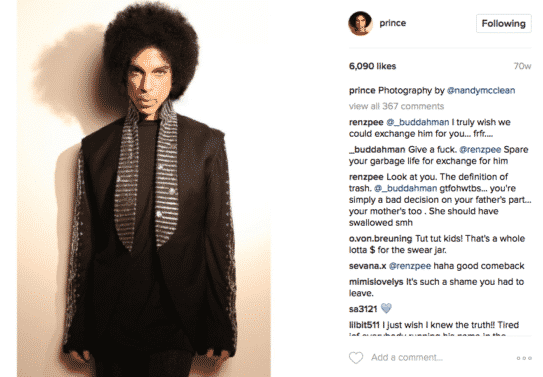 So, what’s the phenomenon behind the Afro? Well, it’s our hair in its most natural form, but that’s only part of the phenomenon. It’s a way to fight the status quo without saying a word. And while some argue there’s nothing African about the Afro, many Black Americans view the hairstyle as a symbol of their Black heritage, and it makes us feel good whether it’s African or not.

Another part of the Afro’s appeal? It’s complexity. One minute it’s seen as radical and “sticking it to the man,” then the next, it takes us back to a time when everybody was rocking gold medallion necklaces and platform shoes.

The Afro’s complexity also speaks to our complexity as Black people. Yes, we’re constantly faced with these injustices, but we always get right back into formation by owning our Blackness and inserting a bit of humor—i.e., Black Twitter.

Despite the media’s attempt to whitewash the Afro, it’s still Black as hell, so go ahead and rock on with yo’ bad self.

Princess Gabbara is a Michigan-based journalist whose work has been published in several national publications, including EBONY Magazine, Jetmag.com, HelloBeautiful.com, BET.com, Huffington Post Women, and Sesi Magazine. Visit her site or follow her @PrincessGabbara.