Ephemera: items of collectible memorabilia, typically written or printed, originally expected to have short-term use. For Charlotte, North Carolina native Cheryse Terry, she always knew she wanted to open a brick-and-mortar shop that embodied this, specifically displaying literature and other published works important to Black culture. That dream has now become reality for the mother of 3 as she just opened the doors to her new book café, Archive CLT.

When you walk through the doors, you instantly feel the Black excellence exude from the walls. You’re surrounded by vintage copies of Ebony and Jet, as well as books written by bell hooks, Gordon Parks and others. There’s a large hand-painted black and white mural with faces of Black icons and legends, including: James Baldwin, Octavia Butler, Gordon Parks, Nikki Giovanni and more— that greets you as soon as you step inside. And, we can’t forget the photo-worthy bathroom filled with pages from some of these same iconic publications.

After her mother passed away in 2014, Terry wanted to feel closer to her, but she realized she never asked the important questions to learn more about her upbringing as a young woman in the 70s. She started collecting vintage copies of Jet and Ebony to get a glimpse into what her mother may have experienced during that time.

“I started collecting Ebony magazines from around 1970, because she would have been around twenty at that time. I wanted to piece together her life by figuring out things like: what she might have worn and the type of music she listened to, now that she’s gone.”

Terry’s expansive collection started with Ebony’s October 1971 issue, with Dick Gregory and his children on the cover, back in 2015. She was instantly drawn to the advertisements throughout the magazine. Seeing the beautiful Black afros, and display of Black excellence personified, led her to fall in love with everything Ebony and Jet stood for in the Black community.

“I just loved the way Ebony and Jet were pieced together,” Terry explained. “I become enveloped in the stories. Not to mention the legacy that John Johnson put together, and the fact that he put out a weekly magazine [Jet] and got it to people’s doorsteps every week, is amazing to me.”

It then led her to an estate sale, where she was able to purchase twenty additional issues. From there, her collection grew as she searched websites like eBay, visited more estate and yard sales, and even asked friends if their family members were willing to part ways with some of their old copies.

“To my surprise, they would always have at least one or two. So I would also collect them by simply asking around.”

Archive CLT is not your average book café. While you can pop in for unique handcrafted, locally-roasted coffee drinks, the shop is also creating its own legacy for the local community. Terry intentionally opened the business on Charlotte’s historically Black west side, to pour into a community that once raised her. 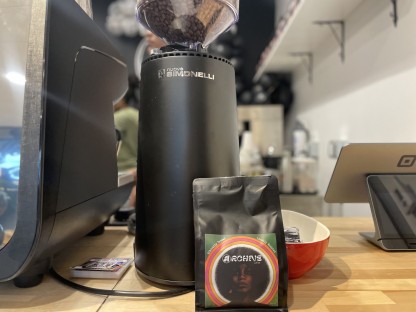 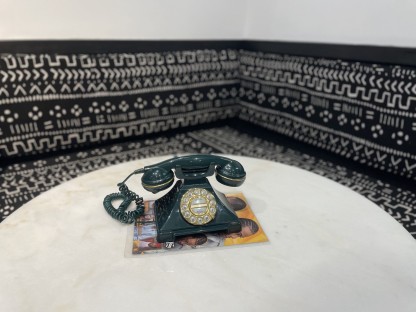 “It wasn’t like I was looking all over town for a brick-and-mortar space and came across this,” Terry shared. “I specifically looked on the west side to open a brick and mortar. As a teen mom myself— which I feel like was due to my lack of exposure— I feel like being in this community near historically Black West Charlotte High School, and as a Black businesswoman, I have the ability to change the trajectory. I just want to be impactful in any way that I can.”

Terry will partner with a friend’s non-profit organization, Stiletto Boss University, which exposes West Charlotte students to the world of entrepreneurship. She will work closely with the group to offer a monthly book club, so the students are further exposed to and inspired by historic Black literature.

As we continue to progress toward a more digital society, Terry emphasized the importance of opening Archive CLT now and preserving printed Black media and memorabilia.

“I feel like a lot of our stories, and important Black figures, get lost in the fast digital world. It’s important to have your hands on relics and see ourselves as valuable. For someone to have come up with that much content weekly, take pictures, and send it to us every week— that is something to be collected because that level of excellence we no longer see.”

And while Terry loves the value that printed media holds, she also understands the need for digital options as well. A childhood house fire left her without baby photos to pass on to her daughters. Because of this, she will offer customers a service that allows them to scan and digitize their own printed photos.

For now, Archive will open daily as Terry gauges customer interest on the best hours of operation. In addition to the drink menu curated by well-known mixologist Justin Hazelton and Black-woman coffee brewer, By Any Beans Necessary, the space will also offer tea and pastries, as well as host chess lessons, floral arrangement classes, live paint nights and more.