It’s been months since Tiffany Haddish had the Beyhive trying to figure out #WhoBiteBeyonce, with most concluding that Sanaa Lathan was the woman in question. While the Brown Sugar actress denied being the culprit, Haddish has yet to confirm or deny her involvement, recently telling The Hollywood Reporter that Lathan’s family took issue with their daughter’s name being thrown into the spotlight over something so unflattering.

“I’m super good friends with her stepmom and her dad [Stan, a producer-director], and they were mad at me. They were like, ‘Why would you do this to the family? You know, black actresses, you guys have to stick together, it’s so hard for you guys to get work as it is, why would you try to ruin her career?’” Haddish said.

“But I didn’t try to ruin her career. I never said her name! I was just trying to say how Beyoncé kept me from goin’ to jail that night. I coulda just shut my whole career down.” 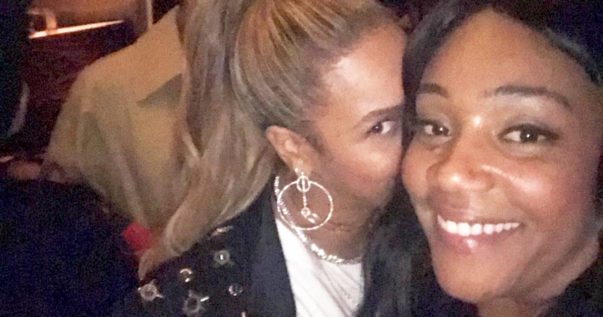 Haddish detailed in GQ the night she met Mrs. Carter at a 4:44 tour afterparty, revealing an unnamed actress flirted with JAY-Z and later bit Beyoncé on the face. The latter revelation came after the Houston singer subtly suggested on DJ Khaled’s “Top Off” that the stand-up comedian keep her business private, which has led to fans of the Grammy winner to call out the Girls Trip actress.

The South Central, Los Angeles native responded to the backlash, saying she loves Bey and was willing to fight for the “Ego” singer if need be. She also asserted that she’ll always speak her truth, regardless of who has a problem with it.