Why Women Have the Right to Refuse Trump Supporters for Mates

This past weekend, The New York Times entered another article into the “mean Liberals forced good people into embracing an open bigot” sphere of political Trump analysis. This problematic line of thinking presents Trump supporters as cogent, welcoming and thoughtful citizens, who are simply looking to improve their socioeconomic station in life. It also simultaneously frames liberals as unrepentantly unhinged psychos addicted to quarreling at the expense of qualitative verbal exchanges. It is a viewpoint that is as ahistorical as it is dangerous.

No, liberals did not embolden these people or force them into supporting the destruction of liberal democracy. For the record. pic.twitter.com/DtP3CNFYiV

But there was one part of the article that was incredibly troubling. It essentially insinuated that part of the “liberal problem” with not openly accepting Trump, was that supporters can be attributed to women who choose not to date men who voted for Trump.

Protests and righteous indignation on social media and in Hollywood may seem to be about policy and persuasion to liberals. But moderate conservatives say they are having the opposite effect, chipping away at their middle ground and pushing them closer to Trump.

“The name calling from the left is crazy,” said Bryce Youngquist, 34, who works in sales for a tech start-up in Mountain View, Calif., a liberal enclave where admitting you voted for Mr. Trump is a little like saying in the 1950s that you were gay. “They are complaining that Trump calls people names, but they turned into some mean people.”

Mr. Youngquist stayed in the closet for months about his support for Trump. He did not put a bumper sticker on his car, for fear it would be keyed. The only place he felt comfortable wearing his “Make America Great Again” hat was on a vacation in China. Even dating became difficult. Many people on Tinder have a warning on their profile: “Trump supporters swipe left” — meaning, get lost.

ThinkProgress editor Judd Legum immediately picked up on the problematic nature of that piece of the article and thoroughly broke down why it’s such a disgusting assertion to make.

1. Just want to take another minute on the ridiculousness of this article pic.twitter.com/Vu6yoz6gPG https://t.co/wI0okFsnVo 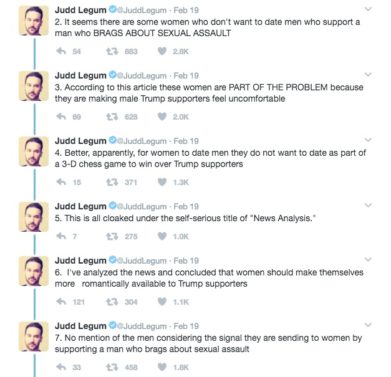 It is beyond disgusting to twist a women’s own emotional, mental and physical agency in whom she decides to date into a form of discrimination. The idea that Mr. Youngquist, or any dude out here like him, has been victimized by women who don’t want to date a guy that openly supports a man who bragged about sexual abusing women, is so damn ludicrous it’s hard to put into words that don’t result in a string of endless expletives. Especially when you take into account that it was mostly White women of various ages and education levels that voted for Trump, while women of color openly fought against the Trump brand.

People ask why did 94% of black women vote for Trump? pic.twitter.com/ghl9Tgb5eS

@womensmarch solidarity is more than a selfie pic.twitter.com/pi3KiRgzRO

There is something openly sinister about believing that women who voted against a platform of inequality, xenophobia, hatred and bigoted violence must acquiesce to the men who voted for those things by opening their legs and their hearts to them. These women owe Trump supporters nothing. And if we continue to ignore the reality that Trump and his supporters waged a year-plus campaign of virulent hate speech, we’re effectively suggesting that women subject themselves to the sort of relationships where their vaginas are treasured far more than their intrinsic worth. That’s not just stupid, or ignorant, that’s dangerous.